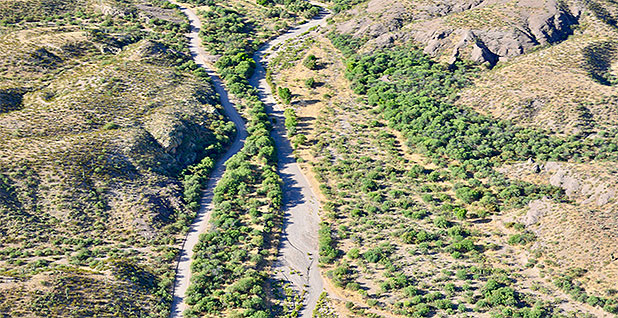 The San Pedro River is wider than a nearby road. Aerial support provided by LightHawk. Ariel Wittenberg/E&E News

Federal officials laid out long-anticipated plans to build President Trump’s border wall through the San Pedro River in Arizona — the last undammed desert river in the Southwest — in a private webcast presentation obtained by E&E News.

Officials with U.S. Customs and Border Protection told environmental groups and congressional staffers during a June 12 webinar, which was first reported by the Arizona Daily Star, that they are planning to build 30-foot-tall posts or "bollards" across the river with anti-climb steel plates fixed to the top.

Swing gates would then be constructed under the posts to accommodate the river’s flow, the officials said. And a little over 9 feet north of those posts, a 550-foot-long bridge would span the river.

Conservationists who viewed the webinar said they worry the current plan could have "catastrophic" consequences if the 140-mile-long river, which dramatically rises during monsoons, swells too high, damages the wall and creates a sort of dam that floods the region.

The wall will "render all water crossings in this part of the state impermeable, and the risk of flooding damage and erosion is going to be enormous because there’s no secondary backup plan if that system fails," said Myles Traphagen, a science coordinator for the Wildlands Network.

While the San Pedro River may appear to be a mere ditch in dry seasons, the water body drains more than 4,700 square miles of land — four times the size of Rhode Island — and swells high and large when summer storms arrive, Traphagen said. The river, which flows north, can be fueled by storms in Mexico (Greenwire, July 9, 2019).

Last May, the Department of Homeland Security announced plans to build the border wall across the river with "18-to-30 foot concrete-filled steel bollards that are approximately 6 inches by 6 inches in diameter." The San Pedro project is part of a 63-mile-section of the wall being built with Department of Defense fiscal 2019 funds, according to the presentation.

Officials on the webinar said they opened the project to public comment at that time and received more than 250 unique comments and recommendations. Trump administration officials also waived environmental laws for the border wall to ensure expeditious construction, they said.

During the teleconference, Paul Enriquez, director of acquisition, real estate and environmental issues for the Border Patrol’s infrastructure portfolio, said the original design for the wall across the river — a series of culverts with bollard-styled fencing on top and drop gates below — was rejected earlier in the year due to concerns, some from the Bureau of Land Management, about debris and sediment buildup.

The developer needed to craft a new proposal, which Enriquez and other officials presented at the webinar.

But the project has drawn widespread backlash. In January, hundreds of protesters gathered to march across the Hereford Bridge to criticize the proposal and lack of details, Arizona Public Media reported.

But participants in the webinar expressed concern about flooding and the lack of openings for larger mammals, and asked who would open the swing gates when monsoons arrived. Hydrologists have warned that large debris like trees could get stuck in the culverts and create a dam, flooding the Mexican side and creating widespread damage for downstream infrastructure.

Traphagen in an interview reiterated that point.

"It could be a catastrophic situation where the steel bollards and concrete footings end up being knocked over and cause a lot of damage to trees, property, riparian areas because of uncontrolled flooding, trying to hold back the drainage of thousands of square miles," he said.

Michael Hyatt, Border Patrol agent in charge of the nearby Brian A. Terry Station, said on the webinar that agents would open the gates during monsoon season from late June to September.

CBP and the Army Corps of Engineers did not immediately respond to a request for comment when asked about the online discussion, the cost of the new proposal or why it was chosen.

BLM, which oversees the San Pedro Riparian National Conservation Area, a 40-mile stretch of the upper San Pedro River, also did not immediately respond to a request for comment.

Officials also acknowledged that communication has been a persistent problem.

Gabriel Guerrero, acting assistant chief of public affairs for the Border Patrol’s Tucson Sector, said on the webcast that he recognizes there is "frustration" about information-sharing and that the process has "not been perfect" for the wall and other projects around the San Pedro River.

"There are times when I’m finding out about construction beginning as a result of your notifying station commanders," Guerrero said. "I apologize, and I want you to understand communication has not been done well from all levels of government."

Guerrero also said arrests have gone down "dramatically" in the sector.

But Dan Millis, manager of the Sierra Club’s Borderlands program, during the webinar noted that the San Pedro River is located on lands belonging to Indigenous tribes.

"None of them are represented on this call, and I am very suspicious that you are not reaching out to any of these key stakeholders whose sacred lands and traditional lands are being destroyed by the ongoing activities of Kiewit construction," he said. "There are a lot of people who should be on this call and are not."

Guerrero said the webinar was mainly meant to follow up with groups that had planned to take part in an earlier Zoom chat with Democratic Rep. Ann Kirkpatrick, whose congressional district in Arizona includes the San Pedro River area.

Guerrero said that discussion was interrupted because CBP didn’t have permission to participate in anything tied to Zoom without DHS’s approval.

"We’ll do outreach separate from this," he said.

But Ron Barber, a former congressman now serving as Kirkpatrick’s district director, said the congresswoman has been sending letters to DHS since last October regarding water extraction from the San Pedro and other environmental issues.

Barber and another staffer for Kirkpatrick said the congresswoman wants a more public discussion with more participants, and they called on the agency to answer her specific questions posed in the letters.

"I think it’s highly disrespectful," said Barber. "I would urge somebody at the top of DHS to have the courtesy to respond to a member of Congress."