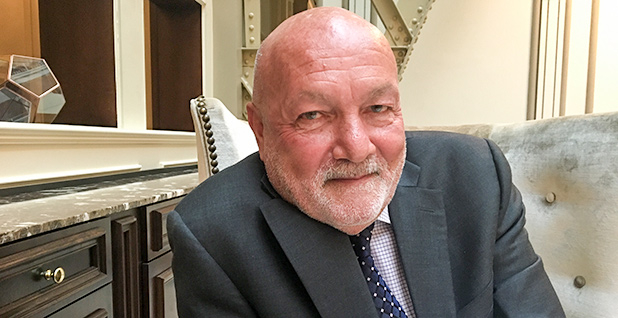 Ed Russo is one environmentalist who loves what President Trump is doing. Robin Bravender/E&E News

Ed Russo is an anomaly. He describes himself as a "dirt-kisser tree hugger" and an "environmental crusader." He’s also a Trump loyalist.

"I think he’s doing a great job," said Russo, 71, who was a longtime environmental consultant for President Trump’s businesses.

Last September, Russo wrote a book titled, "Donald J. Trump: An Environmental Hero." The Key West, Fla., resident was in Washington, D.C., last week to push his new venture that aims to produce clean drinking water by sucking it from the air. He met with U.S. EPA officials to discuss water standards, and he stayed at the Trump International Hotel across the street from that agency’s headquarters.

Russo, who said he turned down a job as Trump’s White House environmental adviser, remains a staunch defender of his former boss and golfing partner. (Russo says Trump is "a great golfer" but he "can’t chip worth shit.") He thinks Trump has been unfairly targeted by greens and the media, and he says the president and his team have been hard at work on the issues that really matter.

During his 17 years working for Trump, Russo said, "he was a staunch supporter of clean air and clean water. He focuses on that. … He has a practical approach to environmental protection."

Trump and his administration have been under fire from the left for their environmental policies, including their assault on President Obama’s climate regulations. Trump famously said before his election that global warming was an "expensive hoax" created "by and for the Chinese."

But while that line from Trump often gets quoted, Russo said, "I’ve never heard anyone come back and say, ‘Well, what do you think he meant by that?’ … He meant that the climate is always changing and global warming is distracting a lot of people."

Russo said he’s now an informal adviser of sorts to the president. They spoke about climate change in New Jersey earlier this year, he said, just before Trump formally announced that he’s withdrawing the U.S. from the Paris accord.

In the Trump Hotel last week, Russo scrolled through photos on his phone, showing one in which he’s dining with Trump. Others showed Russo talking with Ivanka Trump and her husband, Jared Kushner. They were asking him to convince Trump to reconsider pulling out of the Paris deal, Russo said.

"They were absolutely against pulling out of the climate summit," he said. They thought Russo might have better luck changing Trump’s mind. "I’m his age, and we’ve had some screaming matches in the past."

Russo pointed to one spat he had with Trump before the presidential election, when Russo was in the hospital after a heart attack. They hadn’t spoken for several months when Trump called the hospital. Trump told him, "You shouldn’t worry about anything having to do with health because only the good die young, so you’re going to be around for a while," Russo said, laughing. "He’s a ball-breaker from the beginning."

Earlier this year, they talked about the Paris Agreement. Russo said the president "asked very serious, probing questions" about the deal. "His point was this: Why the hell should we be giving billions upon billions of dollars … to our global competitors — China, Russia, India — when they continue to pollute? There’s more coal-fired energy plants opening in China every day, and nobody covers that."

Trump asked Russo: "How do you think we’re doing?" And Russo told him: "I think we’re doing great, if you look at the amount of renewable energy that we’re transferring to in the United States … we are way ahead of the requirements of the Paris climate summit, without any government oversight or regulations."

Trump, according to Russo, "realizes that just let the open market play out and we’re going to get rid of all the dirty, filthy, disgusting fuel sources that we’ve had to use."

When Hurricane Irma recently hit Florida, Russo’s wife was evacuated from their home; Russo was in Texas volunteering with the Federal Emergency Management Agency after Hurricane Harvey hit that state. Many scientists have said hurricanes are getting stronger due to climate change.

But Russo isn’t stressing it.

"Shut up and clean up the toxic waste dumps in the town. Don’t try to use every time there’s lightning or thunder that, oh, it’s climate change," he said. "Climate change is a natural change in balance of the Earth, it happens all the time. There’s been ice ages and warming trends, it goes back and forth. And yes, pollution accelerates that. But that should be used to mobilize people to clean up the mess we made."

Russo says climate change has been "hijacked to do nothing" and warns that there are more pressing environmental problems, like the "pollution that’s being emitted from thousands and thousands of toxic waste dumps and landfills throughout our country."

Instead of focusing on cleaning up toxic waste, Russo said, Trump’s detractors are preoccupied. "Oh, let’s have a rally and wear pink hats and do stupid shit, but not do any practical environmental work to stop pollution," he said.

"I’m not making this up," he said. "I sent them both an email, I said what are you guys, nuts? The only one I agree with is the plant-based diet because I’ve been on a plant-based diet for over seven years now and I’m healthier and I’m making the planet healthier. It’s great stuff."

So far, Russo has been happy with what Trump and his top environmental official, U.S. EPA boss Scott Pruitt, are doing.

"He is having Scott Pruitt focusing on cleaning up … brownfields and toxic waste sites. … Of course a lot more needs to be done, but that’s where the EPA should focus."

Last November, Russo — a New Jersey native who served on local environmental commissions in the Garden State — fielded phone calls from his environmentalist friends who were worried by Trump’s surprise victory.

"One of the top environmentalists in New Jersey called me up the day after the election and said, ‘Oh, my God, we’re going to pull out of the Paris climate accords, we’re all going to die.’ I said, ‘Hey, David, what are you doing? What are you talking about? Once you start to roll up your sleeves and clean up all the toxic waste mess in New Jersey, then come to me, we can talk about the Paris climate accords. Until then, shut up. And this guy is one of the top guys, and I’ve worked with him for years shoulder to shoulder cleaning up toxic waste dumps back in the day."

Russo declined to give David’s last name, saying it was a personal conversation.

Some — including Russo’s daughter, an actress — say it’s possible to tackle toxics and climate change simultaneously.

In his book about Trump, Russo chronicles how he was once skeptical of Trump’s motives but was won over as Trump gave him leeway to develop aggressive sustainability plans for major development projects — including golf courses in New Jersey, Scotland and along the Potomac River in Virginia.

But Russo says Trump has never gotten the credit he deserves when it comes to the environment.

"No one is going to wake up tomorrow and say, ‘Hey, you know what, Donald Trump’s right. I’m going to go join a local organization and try to close the landfill down in my town, or there’s a dead zone out in the Gulf of Mexico and I’m going to start taking water quality samples and see if I can get somebody’s attention.’"

And he said Trump’s policies aren’t getting any positive press coverage because "they’re too busy saying to themselves, ‘Well, this might actually make Donald Trump look reasonable on the environment, and we can’t have any of that.’"

He added, "The proof of that is, you’ve never seen me on TV." He said some of the interviews he’s done haven’t been published because he doesn’t fit into the media’s narrative.

Russo was offered a job as senior adviser to the president on environmental and energy issues, he said. "My wife wants me to go, but I keep on just kicking the can down the road." He might accept the post eventually, "maybe 2018," he said.

"I think I’m having a better impact from the outside," he said. And "if I was in the White House, I’d be in arguments with everyone, because no one would get me there, either."

A better job for him might be EPA spokesman, he said. "I think I could challenge the media or redirect the media."

His strategy would be to press reporters about why conversations turned from "global warming" to "climate change."

He said, "If I was an EPA spokesman, as soon as the first question came up, ‘Do you believe in climate change?’ No, hold the phone, stop, what happened to global warming, everybody? I would stick to that until their brains melted. … I want to get them to understand how important the environment is, and not just this gotcha crap that’s been going on for all these years."