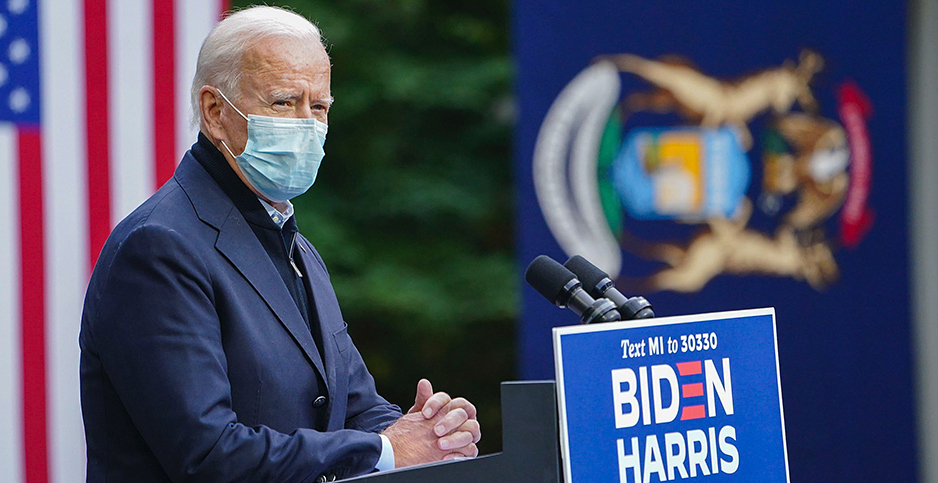 Joe Biden rolled into Miami this week with a clear message for the climate change hot spot.

The Democratic presidential nominee’s message was about the coronavirus, not climate. But these days it can be hard to tell the difference.

The pandemic is once again dominating electoral politics after Trump’s infection and a three-day stay in the hospital. But unlike the early days of the outbreak, when all other issues faded to the background, this time Biden is trying to keep climate change in the conversation.

For months, Biden has used the economic crisis from the pandemic to justify his $2 trillion climate-oriented stimulus plan. Now, as Trump’s illness crystallizes public attention on the virus, Biden is blending the rhetoric of his climate plan with his public health proposals.

Political observers said that using one of Trump’s political weaknesses (his pandemic response) to reinforce another of his weaknesses (his climate record) gives Biden the chance to tell variations of the same story.

"Trump buried his head in the sand, and he didn’t listen to the experts. And that’s a very clear contrast to Vice President Biden’s approach, where he listens to science," said Maggie Thomas, who advised the presidential campaigns of Sen. Elizabeth Warren (D-Mass.) and Washington Gov. Jay Inslee (D).

Shortly after Trump announced his diagnosis Friday, Biden gave a speech wrapping together his climate plan with proposals for a national mask mandate, contact tracing and other pandemic policies.

He made the link even more explicit over the weekend at an event with the Amalgamated Transit Union. Biden promised it a short-term investment in personal protective equipment and a long-term investment in expanding mass transit.

"We can both deal with climate, employment and health if we in fact move in a direction to focus heavily on transit," he said.

Biden’s messaging on COVID-19 and climate have started sounding similar enough to be interchangeable.

During Monday’s NBC town hall, Biden didn’t get any questions about climate. Nevertheless, environmentalists repackaged and amplified his comments on the pandemic.

A message from Vice President @JoeBiden during tonight’s #BidenTownHall: pic.twitter.com/5rBXgnrTQX

Biden’s pivot has been hailed by progressive critics, who see it as a welcome change from the primary campaign when Biden’s biggest climate moments came from sparring with activists at rope lines.

The change comes after a summer in which Biden’s campaign coordinated with environmental justice leaders and other activists on an expanded climate plan. It also follows months of polling showing that Democratic climate policy is more popular than Trump’s.

Thomas, who now works with the climate advocacy group Evergreen Action, said Biden is adapting to the perspective that climate permeates everything.

"He’s clearly making connections about the intersectionality of the issue," she said.

The Biden campaign said he sees the pandemic and climate crisis as interlocked, along with the economic recession and racial injustice.

"Vice President Biden understands that tackling each of these crises requires an ambitious, integrated, and widespread approach. That’s why he has outlined a bold agenda to ensure we can defeat the virus, tackle climate change while creating union jobs, and build back our economy better for all working families," Biden spokesman Matt Hill said in a statement.

Biden’s choice to keep linking climate to COVID-19 gives him the chance to talk about racial disparities, helping workers and other areas of strength, said Collin Rees of Oil Change International.

"I think that it is becoming overwhelmingly clear that a response to COVID and building back the economy and coming together as a nation — that has to have climate as a lens. And I think it’s great to see the Biden campaign starting to kinda talk about it that way," he said.

"That’s a way to continue to drive a wedge between himself and Trump and the GOP, who are very much on the other side of the science on both [climate and COVID-19]."