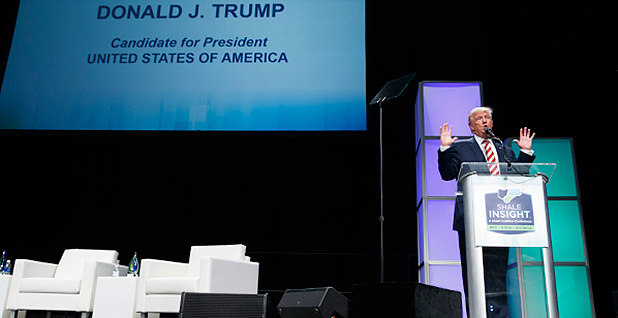 PITTSBURGH — Donald Trump yesterday pledged a broad regulatory rollback and new opportunities for natural resource production from federal lands and waters in a talk that echoed themes raised by some industry stakeholders but left others questioning how different a Trump administration might look from a Hillary Clinton administration.

"Our energy policy will make full use of our domestic energy sources, including traditional and renewable energy sources," Trump told an oil and gas industry audience at a conference here yesterday. "That means we will end the war on coal and the war on the miners. I will rescind the coal mining lease moratorium, the excessive Interior Department stream rule, and conduct a top-down review of all anti-coal regulations issued by the Obama administration."

Trump also promised to eliminate the "highly invasive" Waters of the U.S. rule, the Climate Action Plan and the Clean Power Plan, which he said would "increase monthly electric bills by double-digits without any measurable improvement in climate."

Trump said he would do all that while "conserving our wonderful natural resources and beautiful natural habitats."

"My environmental agenda will be guided by true specialists in conservation, not those with radical political agendas," he pledged (Greenwire, Sept. 22).

The speech was well received by the oil and gas operators, equipment manufacturers, environmental services firms and other industry stakeholders gathered to hear Trump’s pitch on energy. In panel presentations and trade floor talk throughout the two-day Shale Insight conference, most people have generally talked favorably about the Republican candidate.

An informal "mock election" conducted in sharpie on a white board at a booth of Kallanish Energy, an oil and gas news service, showed Trump viewed more favorably than Clinton. Hash marks representing "positive" factors from a potential Trump presidency outnumbered those in favor of Clinton by a factor of 10.

"[One person said Clinton] said she would ban fracking and that she killed the coal industry, so would she do the same for gas?" said Caroline MacMillan, director of Kallanish Energy’s commodities management team. "On the Trump side of things, people are largely positive, someone said that he won’t … change much and keep it going, but he can’t make it super great because of the market factors that will limit how great you can make something."

Some industry voters voiced concern about Trump’s comment that he would allow local bans on hydraulic fracturing, MacMillan said, while others said Clinton would likely usher in more market constraints. Still, others said that by constraining coal-fired generation, Clinton could benefit natural gas.

But will those mock choices translate into hard votes come Election Day? Was Trump the clear winner? MacMillan was skeptical.

"I don’t think so, just yesterday in [Pittsburgh’s] Post-Gazette there was an article saying that actually Clinton was the pro-gas candidate but no one in the industry was willing to admit that," she said. "And no one here is really saying that, either," she added.

Some people attending the event were unequivocal in their support of Trump.

Another man from Pittsburgh who works for an oil and gas midstream company and similarly asked not to be named, put it bluntly. "He’s the right candidate for our industry, hands-down."

A conference attendee who consults on oil and gas projects throughout the Marcellus Shale play and asked to go unnamed said that Trump had caught on to the industry’s biggest challenge, a heavy regulatory burden. "Regulation’s dragging the entire industry down," the man said, pointing to interlocking state and federal rules that lead to varying regulatory requirements by state and region, and poor communication among state and federal overseers. "We have no control over our project schedules," he said.

Even more adamant about the need for anonymity were those who challenged the apparent orthodoxy that oil and gas voters support Trump.

"I despise him. And more importantly, I think he’s dangerous," said a man who described himself as an entrepreneur in the energy space. "I think he will cause great damage to the global economy and therefor will sink energy prices. And that his protectionist anti-trade policies will actually harm our energy industry and our trade relationships."

In a low voice, another suggested the two candidates would likely shake out about the same.

"I just don’t see anything in terms of his platform that would indicate any change in energy policy from what we have," he said. "Likewise, I don’t see anything in Clinton’s proposals that would indicate a dramatic change in energy policy, or in her track record. I mean, Clinton has what amounts to a moderate Republican track record, by historical standards."

Setting energy aside, then, he said, "I think the key thing to remember in this election is that you can’t be a single-issue voter. The country is complex, the economy is complex, the world is complex, and the president has to be able to navigate all the different concerns that face the country."

Also hesitating was Erica Gillis, who works on oil and gas conferences in the region and says business has been down by more than half since oil prices were high.

"I think he would be good for the industry, so I’m conflicted in my thoughts," Gillis said. Either candidate is likely to preside over an eventual upswing in the industry, she said, but she sees Trump as the candidate who can "greatly expedite" a turnaround.

"The conflict is of course with his accountability, and its’s very difficult to know if he’s trustworthy. But then again, we don’t know if the other candidate is, either. He’s back and forth, and flops on issues small and large. And I just have a hard time with that," Gillis said.

Others pointed to the limited choices available. "I just hope that four years from now, we have some better candidates and options," one man said.

Another left the door open to a last-minute change on the ballot. "Of the candidates that are running right now, he’s the one with the most realistic perspective of the big picture of how this industry fits in nationally and globally," he said of Trump.

Ultimately what the industry cares about most is how a candidate’s words translate to action, and industry veterans have seen enough of the give and take of politics to know that what they hear is not what they get.

Rob Boulware manages stakeholder relations for Seneca Resources Corp., a subsidiary of National Fuel Gas Co. that drills in the Marcellus Shale, and he pointed to the challenges of carrying through on a resoundingly pro-industry agenda.

"Certainly [Trump’s] message today, I think, resonated with an energy crowd. And I think the points that he spoke about were some of the same message points that we talk about as an industry — the need to have the right mix of oversight and regulation, as well as enough latitude to do our business," Boulware said.

But he suggested that if Clinton had spoken to the conference, her reception would likely have been warm as well. "This was an energy room. I think had Hillary Clinton been in the room, we might have heard a different rhetoric than she may say if she’s speaking to the Sierra Club. And you know, we as voters all have to take that into consideration."

Boulware pointed to the lack of a formal national energy policy as an indicator of the challenge of governing once a candidate moves into the White House. "The candidates themselves would probably agree, that taking what might be in your heart or even in your plan is sometimes more difficult to deliver on once you get to Washington, D.C.," Boulware said. "A lot of times what one person says while they’re campaigning and what they’re able to achieve, there’s a gap, and that’s the reality."