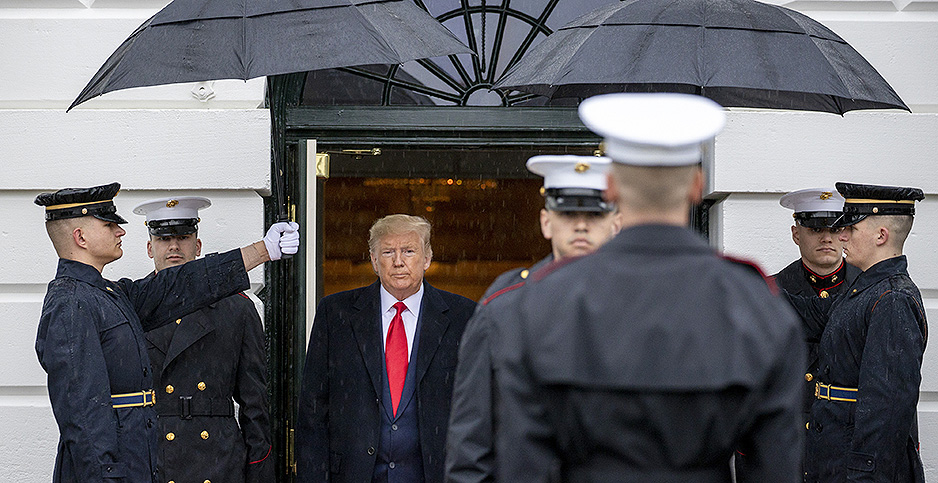 President Trump at the White House yesterday. His administration is minimizing the effects of climate change in the federal permitting process. Tasos Katopodis/UPI/Newscom

The administration is set to unveil regulatory changes to the National Environmental Policy Act, the bedrock environmental law that requires federal agencies to take a "hard look" at the potential impact of infrastructure projects before approving them. The new regulations would exclude climate change from those analyses while shortening reviews and allowing more projects to proceed without them.

Several hurdles remain before the proposed rules go into effect, so their implementation could fall to whoever is inaugurated as president next January.

That means NEPA’s rules hinge on an election like never before in its 50-year history.

Republicans have pitched the changes as beneficial to renewable energy, arguing that shorter NEPA reviews would benefit solar farms and wind turbines just as much as pipelines and drilling pads.

But a Democratic administration would almost certainly scrap the new regulations. Although some candidates have envisioned other NEPA changes that could accelerate renewable energy deployment, greens see no upside to what Trump is planning — and the renewables industry hasn’t yet offered its support, either.

One reason the timing is so tight is that the White House Council on Environmental Quality, the body in charge of NEPA, has lacked a chairperson for most of Trump’s term. He withdrew his first pick, Kathleen Hartnett White, after her record of rejecting climate change garnered Senate opposition. Trump’s second choice, Mary Neumayr, has been on the job for about one year.

"If they knew what they were doing from the start, they would have put in a [Council on Environmental Quality] chairperson early on and changed the rules earlier, but the environment really lucked out and dodged a bullet from their incompetence," said Brett Hartl, government affairs director at the Center for Biological Diversity.

That means the fossil fuel projects that the administration has tried to rush through since 2017 would probably not benefit from Trump’s changes to NEPA, he said.

The administration says it’s aiming to finish the regulations before the November election, but some observers suspect it could take longer. Additionally, some major rules require a 60-day waiting period before they go into force. If a Democrat takes office during that window, he or she could prolong that waiting period while rewriting the regulation, essentially halting the changes before they go into effect, said David Bookbinder, chief counsel for the Niskanen Center, a free-market think tank.

By daring the next Democratic administration to rewrite NEPA regulations, Trump could be laying the path for a future president to go further than President Obama, who declined to issue NEPA climate regulations and instead opted for guidance, Bookbinder said. That was a major missed opportunity for Obama, he added.

Democrats, especially those who support a Green New Deal, are already eyeing changes to NEPA to smooth the way for a massive renewable energy build-out. For instance, Sen. Elizabeth Warren of Massachusetts has proposed minimizing aesthetic concerns when siting offshore wind farms.

Currently, one lead agency begins a NEPA review before passing it to others that might find problems requiring significant changes to a project. Those changes would cause less disruption, and get resolved more quickly, if each relevant agency identifies them upfront before getting deep into the lengthy and expensive environmental review process, Hayes said.

Many Democrats, though, are wary of significant changes to NEPA and say long delays could be fixed with more staffing.

There are also strategic concerns at play. NEPA is a major point of leverage for environmental groups, which can delay projects with lawsuits claiming inadequate NEPA analysis. Sometimes those delays are long enough to kill the project. NEPA can be easier for renewable energy projects than fossil fuel projects, too.

Wind and solar developments usually have a lighter footprint and are easier to construct than drilling projects, so they can often clear the NEPA process more quickly, said Nathanael Greene, the senior renewable energy advocate at the Natural Resources Defense Council.

That speed is part of what makes renewables cost-competitive, so shortening the NEPA process for fossil fuel projects would amount to an oil and gas subsidy, he argued.

To be sure, the process can also be lengthy for renewable energy developers.

In Wyoming, a developer proposed a 3,000-megawatt wind farm in 2006. The project by the Power Company of Wyoming finished its last site-specific environmental assessment in December — seven years after former Interior Secretary Ken Salazar signed off on the project’s environmental impact statement.

"Project sponsors and ordinary Americans seeking decisions on permits from the Federal Government can face significant uncertainty and delays that can increase costs, derail important projects, and threaten jobs for American workers and labor union members."

Greens mostly dispute NEPA’s image as a bureaucratic logjam, and sometimes they frame its delays as a feature rather than a defect.

One example they point to is Nevada’s Crescent Dunes solar plant, which in 2011 had won loan guarantees from the Obama administration and was sited on public land with help from then-Senate Majority Leader Harry Reid (D-Nev.). By 2015, the $1 billion solar thermal plant was already obsolete, and the Energy Department took it over in August, according to Bloomberg Businessweek.

"Going a little slower at the front end, rather than rushing to approve, helps ensure against $1 billion boondoggles," said Hartl of the Center for Biological Diversity.

"I will give Republicans a lot of credit for demonizing NEPA over the years, as most projects already happen on time, including their environmental reviews. Taking a few years to listen to all the stakeholders, properly thinking through unintended consequences and properly mitigating a project, even for renewable energy, is worth it."

Even if abbreviating NEPA reviews could help speed up some renewable projects, it might hurt the entire renewables sector by reducing the time it takes to permit fossil fuel projects, said Greene of NRDC.

"So you might have one project here or there [that benefits], but the whole of the industry would lose one of its advantages," he said.

Many renewable energy companies and trade groups are waiting to see what Trump’s regulations say, but some are already skeptical.

Brandon Burke, policy and outreach director at the Business Network for Offshore Wind, said Trump appears to be undermining NEPA by stripping out climate analysis.

"The opportunity for public input into federal decisions that may have localized impacts and ramifications is a fundamental aspect of American democracy. We think the proposed changes deviate from this well-established framework," he said.