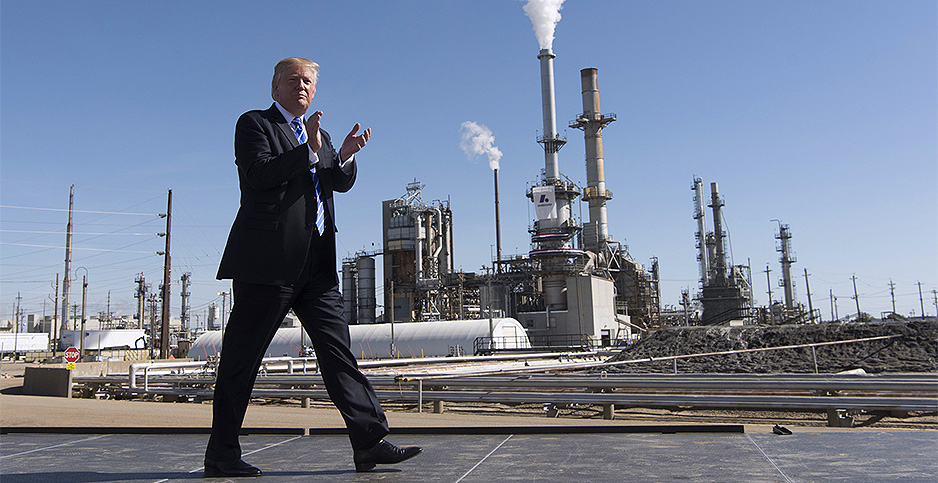 President Trump visits the Andeavor Refinery in North Dakota in 2017. He issued an executive order yesterday suspending some environmental reviews of carbon-intensive projects because of the pandemic. D. Myles Cullen/White House

Communities of color will have fewer ways to protect themselves from pollution and climate change under President Trump’s decision to curtail environmental reviews for infrastructure projects.

The law is often used by the public to shape federal decisions related to infrastructure; it requires agencies to analyze alternatives that could minimize harm to the environment and allows the public to comment. Trump’s order also seeks to circumvent the Endangered Species Act.

The president directed federal agencies to use emergency powers and "other authorities" to accelerate infrastructure development, according to a senior administration official, and "expedite construction of highways and other projects designed for environmental, energy, transportation, natural resource, and other uses."

Little to no precedent exists for the administration’s action, experts and advocates said, adding that such a waiver would hurt communities of color disproportionately because of ingrained economic insecurity and existing pollution.

Trump’s order coincided with a move by EPA to weaken the basis for climate and clean air regulations. Both unfolded against the backdrop of a coronavirus pandemic that’s taken a disproportionate toll on people who are black or Hispanic, and as protests over police brutality against black people gripped the nation’s cities.

"He couldn’t have picked a worse time," said Mustafa Santiago Ali, a 24-year veteran of EPA who helped launch the agency’s Office of Environmental Justice, referring to Trump’s order.

There’s a racial element to yesterday’s announcement, he said. Past administrations fell short in protecting vulnerable communities, but only Trump has "supersized" their problems while trying to silence them by closing legal recourses in NEPA and elsewhere, Ali said.

These NEPA waivers could reverberate for a generation, despite Trump framing them as an emergency response, said David Hayes, the deputy Interior secretary in the Clinton and Obama administrations.

"The stakes are incredibly high," he said. "The kinds of activities that could be permitted by this sort of a sweeping exemption involve projects that might last for 50 years or more."

That makes it likely that Trump’s order will have a tough time standing up in court, Hayes added. Waivers enshrined in NEPA were written for fast-moving emergencies, he said, not an economic slowdown.

"Courts know the difference — everyone knows the difference. There will be no quarter given to the government on this kind of bald-faced excuse to make changes to the law," said Hayes, who was the Interior Department’s top lawyer and is now executive director of New York University’s State Energy & Environmental Impact Center, which works with state attorneys general to defend energy and environmental policies.

He said the company had claimed the river would essentially clean itself of polychlorinated biphenyls. Then environmental justice advocates showed that minority communities downriver relied on the Hudson’s fish for food. That changed the scope of the cleanup, because it was then framed around human costs.

Trump’s order will put communities of color at risk across the country, Mair said.

The suspension of NEPA requirements could have disproportionate effects on minority communities as thousands of people march for equality across the country, said Robert Bullard, an environmental policy professor at Texas Southern University who helped develop the concept of environmental justice decades ago.

It could have dire immediate and long-lasting health effects on the communities most devastated by COVID-19, he said.

"It means the emergency room or cemetery for those front-line communities," he said. "It is so callous and so damaging that when you think about it, it’s almost like saying come on in and do what you want to do, we don’t have to assess the damage or the potential harm because it’s more important to get these things done, and if you’re in the way of this then you will have to either sink or swim or get out of the way, and if you can’t get out of the way, then you’re going to die. That’s how cold-blooded it is."

Past administrations have waived environmental reviews after disasters that require real-time decisionmaking, like managing debris after Hurricane Katrina or deploying oil dispersant after the Deepwater Horizon oil spill.

Trump has long sought to minimize the reach of NEPA, which conservatives and some Democrats have blamed for delaying infrastructure projects. Some environmental groups have used NEPA to postpone projects they oppose, with the goal of making them too expensive to complete.

Trump is pursuing a separate rewrite of NEPA regulations that could exclude climate impacts and set timelines for reviews to end (Energywire, Jan. 6).

It also hides the way vulnerable communities suffer overlapping impacts from multiple projects, said Ali of NWF, and that will get worse under the new order.

"Even in their own writings, they say that this [deregulation] is less protective and more people are going to lose their lives," he said, citing environmental reviews that have acknowledged Trump’s policies harm people, as happened in the environmental review for rolling back tailpipe emissions standards (Climatewire, Aug. 15, 2018).

"That’s part of the conversation [Trump’s agencies] don’t want to have," Ali said.