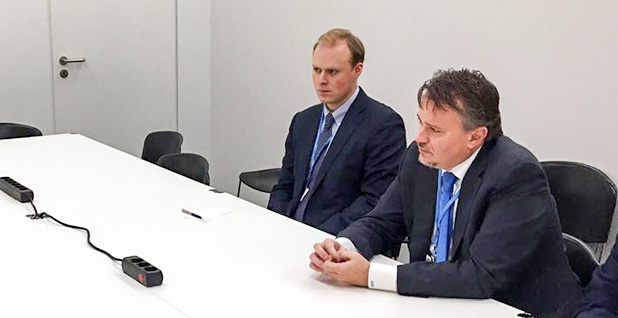 When his name surfaced as President Trump’s new energy aide, some people thought of a different color: green, as in inexperienced. That’s the label 28-year-olds get when they step into a prominent White House role.

Brooke was cheekily nicknamed "the kid" on the GOP congressional baseball team, but those who know him say his mature and confident demeanor belies his relative inexperience.

"They’re wrong, they’re completely wrong," said Neil Chatterjee, a member of the Federal Energy Regulatory Commission and former staffer for Senate Majority Leader Mitch McConnell (R-Ky.). "You know, some people go straight to the [National Basketball Association] out of high school. He’s one of those guys."

That said, those who can speak to his character in the energy world are few and far between. His policy positions and worldview aren’t widely known, which has some Trump supporters worried about the administration’s energy agenda.

So, who is this guy?

"Believe me, my clients are asking me the same question," said an energy lobbyist close to the administration.

Brooke brings a brief but impressive resume to the White House energy adviser slot. Few industry officials inside the Beltway have worked extensively with Brooke, who will come over from Vice President Mike Pence’s office on April 30. His defenders say he’s no novice, despite his age.

Brooke will replace a well-known Washington, D.C., commodity in Mike Catanzaro, a longtime lobbyist who has quarterbacked Trump’s energy policy for more than a year. The gulf in experience between the two isn’t lost on anyone.

Those who know Brooke said he can quickly close the gap. Friends, colleagues and acquaintances alike uniformly described him as a motivated operator who quickly picks up new material by asking challenging questions. In terms of promoting Trump’s agenda, Brooke’s allies see him as a sign of stability in a White House that has witnessed significant turnover. They described him as a conservative who is an able coordinator, the latter of which is key for his new post.

"The guy is a sponge. He’s able to soak in everything," said Brian Kelly, an energy lobbyist who has known Brooke for several years. "The people who work with him in and around the White House and the agencies know he is someone who is very well-trusted. The guy is a great follow-on to Mike Catanzaro."

Brooke’s former colleagues from his days on Capitol Hill agree. Chatterjee first met Brooke in 2013 when he was a legislative correspondent — and later an aide — for Republican Rep. Andy Barr, whose 6th District includes Chatterjee’s hometown of Lexington, Ky.

Brooke was a serious and savvy behind-the-scenes political operator, a voracious and "wonky" reader and thinker who immediately caught his attention, said Chatterjee. It wasn’t long before McConnell’s office "poached" Brooke around 2016, tasking him with overseeing energy, environment, agriculture and transportation issues for McConnell in his role as a senior senator for Kentucky. Meanwhile, Chatterjee was an energy policy adviser in McConnell’s Senate leadership office.

"We worked hand in glove in all these issues. He got on the leader’s radar because he’s talented and good and serious and substantive," Chatterjee said. "When the new administration came in and they were staffing up, with the leader’s blessing, he got an opportunity to go serve the vice president and clearly has done very well there."

As for policy fingerprints, Chatterjee said Brooke’s handiwork can be seen in the lifting of the ban on crude oil exports, a deal on production tax credits, negotiations surrounding spending measures and the highway bill that had energy components, including financing the Strategic Petroleum Reserve.

What strikes the energy lobbyist Kelly and others most about Brooke is his courage, a quality he’ll need as an upstart working in a volatile White House. When shots began firing at the Republican team’s congressional baseball game practice last summer in Alexandria, Va., Kelly and Brooke took cover behind a building together. Brooke seemed unfazed, Kelly said.

Republican Rep. Joe Barton of Texas, who was also at the game and has known Brooke for five or six years, also remembered his calm and cool when the gunman opened fire. "He didn’t panic, he didn’t do anything that would have exhibited fear or cowardice because I would remember that," Barton said.

Barton also cast Brooke as driven and humble. Barton recalled how he and other lawmakers nicknamed Brooke "the kid" when he first showed up as a pitcher for the congressional baseball team six years ago and were quickly blown away by his talent. The Northwestern grad’s pitch outpaced Louisiana Democrat Rep. Cedric Richmond’s 80 mph fastball, Barton said.

"[Brooke] was a really Big 10 collegiate pitcher, so when he came to practice the first year, I told him, ‘I want you to throw it as hard as you can,’" he recalled. "Our guys couldn’t see the ball. He just blew it by ’em. The next time, I said, ‘Now Francis, don’t throw it that fast. Give ’em a chance.’ He had to tone it down a little bit."

The ex-hurler helped the Trump administration throw a proverbial curveball last November in Bonn, Germany, when Brooke moderated the U.S. event at the U.N. climate talks. The event was almost set up for failure in the public relations sense — the United States, the lone country signaling an exit from the Paris climate accord, went to an international climate conference to advocate for fossil fuel technology. The optics were challenging. Protests ensued.

But Brooke performed admirably on stage and in bilateral discussions with diplomats at the conference, said George David Banks, who until recently was Trump’s international energy and climate aide. Banks said he brought Brooke to Bonn because of how well he performed in bilateral discussions at the White House and in a range of meetings over the past year as Pence’s representative in high-level policy debates.

"Let’s be honest — that is not an easy message to deliver at a climate conference, and Francis was able to step up to the plate and do a terrific job," Banks said. "In the face of the protest and lots of tough questions, he was very poised and very effective in making sure that he delivered a message that was clear and concise."

The message was that countries across the world would continue to use fossil fuels for decades, and that the United States shouldn’t abstain from those markets. By providing more efficient coal-fired technology or expanding natural gas exports, the United States could reap economic and geopolitical wins while also providing a least-bad option for fossil fuel consumption.

Many described Brooke as loyal to the president, saying he’d serve Trump well. He believes in the administration’s "energy dominance" theme and efforts to reduce regulations on industry. He’s stepping in at a pivotal time, as the administration must figure out how and whether to rewrite the Clean Power Plan, fuel efficiency standards for cars and a variety of other issues.

"He’s going to be on the issues where he feels his principals, the people he works for, are on the issues," Chatterjee said. "He’s a consummate staffer."

That’s what worries some in the industry. While Brooke’s defenders have praised his ability to facilitate discussions across agencies and weigh prickly policy questions, he’s got few relationships outside a short-staffed administration that is wondering aloud whether Brooke fully understands the issues he’s tasked with handling.

"His range of familiarity with the issues is not born of practical experience," the energy lobbyist said. "I’m sure he’s been briefed on a lot of things, and I’m sure he’s read a lot on it, but it’s not the same."

That Brooke isn’t well-known is by design, Chatterjee said. He described Brooke as an "internal" player who, at least when he was at McConnell’s office, did less outreach to industry players and lobbyists.

Industry also worried about turnover in the Obama administration that resulted in an experienced energy adviser giving way to a younger successor, said Ross Eisenberg, vice president for energy and resources policy at the National Association of Manufacturers. He noted consternation when Heather Zichal replaced Carol Browner, a known commodity from her days as President Clinton’s EPA chief, on President Obama’s White House team.

Eventually, those fresher faces got a handle on the job. Brooke is likely the next such case, Eisenberg said.

"Age is a number," he said. "[The Clean Power Plan] is one of the things we talked about with him. He certainly demonstrated knowledge and expertise on the issue and a willingness to learn more."