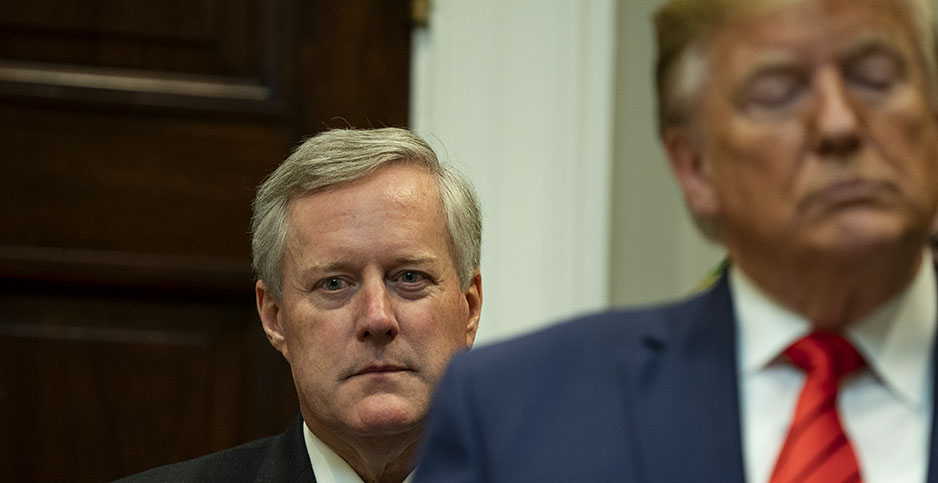 President Trump has tapped Rep. Mark Meadows, pictured on the left, to serve as his next chief of staff. The North Carolina Republican has voiced support for more bipartisan action on climate change — though Meadows supports the U.S. withdrawal from the Paris climate accord. Alex Edelman/ZUMA Press/Newscom

In selecting Rep. Mark Meadows of North Carolina to serve as his next chief of staff, President Trump is bringing into the White House a Republican lawmaker who has raised concerns about climate change and expressed a desire to do something about it.

The approach marks a significant departure from that of the job’s outgoing occupant, Mick Mulvaney, who once called government funding of climate science a "waste of your money." Mulvaney also has continually questioned the basic tenets of climate science, which were settled years ago.

"I’m not yet convinced that it is a direct correlation between man-made activity and the change in the climate," Mulvaney said during his confirmation hearing to serve as the director of the Office of Management and Budget.

Meadows, in contrast, told E&E News last April that "there are a number of us willing to look at [climate change] in a very pragmatic way." He also has indicated he is open to the idea of using a carbon tax to help reduce greenhouse gas emissions.

How much the personnel change will affect White House climate policy, however, is an open question — especially since Trump himself has referred to global warming as a hoax. And it’s highly debatable whether the climate solutions offered by Meadows would be consummate to the existential threat of a rapidly warming planet.

Even so, history provides at least one example of how a climate-minded chief of staff can influence the way global warming is debated within the walls of the White House.

For example, Trump’s former chief of staff, John Kelly, shut down a plan by former EPA Administrator Scott Pruitt to conduct a review of climate science that would have played up doubts about the cause and consequences of global warming.

The aborted effort never recovered, and similar attempts have not advanced either.

Kelly, a retired Marine Corps general, accepted climate science and even worked to better prepare the military for extreme weather events and rising sea levels during his stint as chief of U.S. Southern Command from 2012 to 2016.

Mulvaney, for his part, encouraged a revival of the challenge to climate science. He met with William Happer, a former National Security Council senior director and emeritus Princeton University professor who believes the world needs more carbon dioxide, to advance an adversarial review of the National Climate Assessment.

The idea ultimately was nixed by White House and Trump campaign staff. But Happer recently told E&E News that Trump personally apologized to him and said he would revisit the idea if he wins reelection.

While Meadows’ attitude toward global warming differs significantly from Mulvaney, it would be a stretch to call him a climate champion.

Meadows opposed the Paris climate agreement and rejected a bill that would have required the United States to rejoin the accord. As chairman of the conservative House Freedom Caucus, he once handed Trump a wish list of more than 200 regulations and programs to attack. It included withdrawing from the Paris Agreement, eliminating the State Department’s climate program and cutting government funding for climate science.

Since then, Meadows has signaled a willingness to engage with Democrats on the issue, though not on a level that would jump-start the kind of societal change that many climate activists support.

"Some are asking for my two cents on the Green New Deal. Here it is: our ‘shared wealth’ would be literally about two cents if we tried this," wrote Meadows on Twitter last year in response to the Democratic proposal to fight climate change with a government-led jobs program.

Meadows has some experience in dealing with climate-related issues such as renewable energy. Not long after he graduated from college, Meadows worked as a director of customer relations at the Tampa Electric utility in Florida, which he described on the House floor as a "wind, solar and geothermal expert for an electric utility."

"One of the biggest concerns out there in terms of sustainable energy solutions is not the collection — it’s how do you store it," he has told E&E News. "And so if we’re really going to be serious about it, we need to be providing research for the storage of that energy more so than the collection of it."

Though he is one of the most prominent voices in his party and a close ally of the president, Meadows has not proposed any substantive climate policy that would advance renewables.

"He does seem to understand the politics of climate change are changing," said Alex Flint, executive director of the conservative Alliance for Market Solutions.

Meadows has said he is open to some form of carbon pricing and credited outreach from some of his constituents in swaying his decision.

"It’s really been the reason why I’ve engaged on it," Meadows told E&E News last July. "I don’t think any of them voted for me, but they’ve been very thoughtful in their proposals and their ideas, and it’s really had a profound impact on me."

It’s not yet clear when Meadows will begin his new role as chief of staff. But there is at least one complication — multiple news outlets reported last night that Meadows would self-quarantine after he discovered he may have come in contact with someone who had contracted the new coronavirus.

The Washington Post noted, however, that Meadows had tested negative for the disease.

Polling has shown that young voters and Republicans have grown increasingly concerned about climate change. Perhaps in response to that trend, more GOP lawmakers have advanced ideas to invest in technology around energy production and to plant more trees — though they rarely have shown a desire to slow fossil fuel consumption.

North Carolina is projected to experience 48 danger days a year, where the heat index tops 105 degrees Fahrenheit, by 2030 — a threefold increase from 2000, according to Climate Central.

By the end of the century, sea levels are expected to rise almost 4 feet along some areas of the state’s coastline and high-tide flooding could occur virtually every day, according to a state climate report released earlier this year.