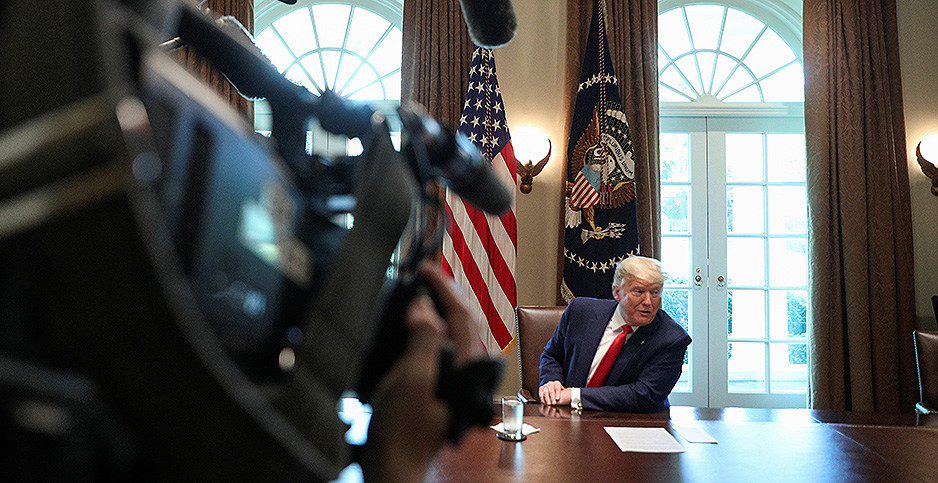 President Trump participating in a roundtable with CEOs from the energy sector in the Cabinet Room of the White House on Friday. Tom Brenner/Reuters/Newscom

President Trump, who met last week at the White House with oil company executives and lawmakers, said over the weekend he’d wield tariffs if needed to protect the oil industry, which is reeling from a global glut in supply.

"If I have to do tariffs on oil coming from outside, or if I have to do something to protect thousands and tens of thousands of energy workers and our great companies that produce all these jobs, I’ll do whatever I have to do," Trump said at a Saturday White House briefing, warning that low prices "are going to hurt a lot of jobs."

"These are great companies, and they’ll figure it out; it’s a free market," Trump said after the White House meeting Friday with the chief executives of Chevron Corp., Exxon Mobil Corp. and others. "We’ll figure it out."

Then yesterday, Trump reiterated that he’d "absolutely" consider tariffs if oil prices remain in the cellar, arguing that it would save "tens of thousands of jobs." But he added that he didn’t think he would have to, because the current price war between Russia and Saudi Arabia is "very bad for them."

"It would put in place a policy that we as a country have been arguing against for a long time — in terms of trying to have free and open competitive markets, so we can sell our oil and gas around the world," Kupfer said. "Once you start to go down that road of protectionist measures, you don’t know where it is going to end."

"No one wins in a price war, and the Saudis and the Russians aren’t benefiting from their decisions," said API President Mike Sommers, who attended the White House meeting. He added in a statement that API had "urged the administration to avoid well-intentioned policies, which could do more harm than good for American producers and create long-term negative consequences for American consumers."

In a video posted after the meeting with Sen. Dan Sullivan (R-Alaska), Sen. Kevin Cramer (R-N.D.) said Trump told the group that he is "1,000%" for the industry and was looking to it for ideas and solutions. On tariffs, Cramer said Trump "was quite bullish, if that’s what it comes to."

Sullivan added that he and Cramer told the president they plan to continue efforts in the Senate to remove U.S. military forces from Saudi Arabia if it doesn’t pull back production, accusing the "so-called" U.S. ally of "hurting the constituents that we represent."

Another attendee, Harold Hamm, a Trump backer whose company, Continental Resources Inc., does business in the Bakken Shale in North Dakota, told Trump he was appreciative of the "friendship" Trump has nurtured with Saudi Crown Prince Mohammed bin Salman and with Putin. Hamm has called for an investigation into what he’s called Saudi Arabia’s "illegal" dumping of crude that sent oil prices into a tailspin.

"I know those haven’t been easy sometimes, but at this time, it was particularly needed," Hamm said.

"The president’s choice to hold a high-profile meeting with oil and gas interests today tells the country everything it needs to know about his priorities in the middle of a crisis," said Natural Resources Chairman Raúl Grijalva (D-Ariz.). "He’s spending his time calculating how much taxpayer money he can stuff in fossil fuel corporations’ pockets in the name of economic recovery."

The price for U.S. crude rose by more than a third during the week, hitting about $28 a barrel Friday, after Trump hinted last week in a tweet that a deal with Saudi Arabia and Russia was possible. But it slid back below $27 yesterday as it became apparent that a deal isn’t imminent.

"The Saudis or the Russians could shut in 100% tomorrow — 100% — and that wouldn’t take up the difference," Ed Hirs, an energy economist at the University of Houston, said in an interview. "The reality is, it’s going to take till the end of the virus to work off the excess supply."

"If these oil producers can’t find buyers and the demand from the refiners is so soft, the producers are going to have to shut in oil," said Cahill, a former director of research at Energy Intelligence, a research firm. "Everyone focuses on this intrigue between the U.S. and Russia and Saudi Arabia and whether they can come to some grand bargain, when the reality is the industry is going to have to because the demand just is not there."

Kupfer, the former DOE official, said that the Russian-Saudi relationship with the United States is a valuable bargaining chip, but the market war isn’t happening in a vacuum.

The United States also can’t dictate production in the way the nationally controlled oil industries in Russia and Saudi Arabia can, he said. But, Kupfer said, U.S. officials at the table are probably making the argument that the United States effectively has cut its output.

A number of other remedies to prevent pain across the U.S. oil patches have been suggested since the glut began, including making loans available to producers, or royalty cuts to help operators’ bottom line — which would largely affect production on Western lands or in the Gulf of Mexico. Congressmen from oil states pressed for this solution via several letters to Interior Secretary David Bernhardt last month (Greenwire, April 1).

"The hardest thing about this is, the core of the Russia-Saudi dispute has become one of egos, and we have a president who is incredibly aware of the importance of self-imaging and messaging. The need for face-saving among these three different parties is a really, really tricky needle to thread," said Reed Blakemore, deputy director of the Global Energy Center at the Atlantic Council. "And that’s what has to happen … because I don’t think there is a way for the United States to exert so much pain on either Saudi Arabia or Russia to bring either one to the table on its own."