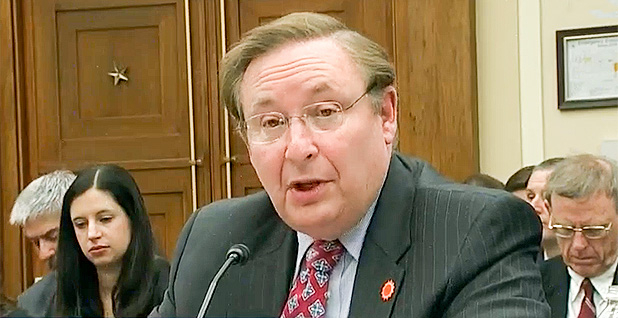 Barry Myers, the CEO of AccuWeather Inc., had no answer when a congressman asked him last year if the United States had been experiencing more severe weather incidents than 100 years ago.

"Not being a scientist, I’m going to pass on that question," Myers told a House panel.

Myers will be in the hot seat this week when he tries to convince a Senate panel that he’s qualified to lead NOAA and its 12,000 employees, more than half of whom are scientists and engineers working around the globe.

"It’s like asking somebody to run your restaurant who doesn’t know how to cook," said Dan Sobien, president of the National Weather Service Employees Organization. "Honest to God, nobody knows what he’s going to do."

But Myers’ lack of scientific credentials is only one worry for opponents, who say President Trump’s pick for the top job at NOAA must address ethical questions and possible conflicts of interest that cloud his nomination.

Critics fear that Myers would move aggressively to privatize the National Weather Service, which NOAA oversees along with the nation’s fisheries. They cite AccuWeather’s backing of a bill in 2005 that would have barred federal meteorologists from providing services that competed with private companies.

And Myers’ brother, Joel, who founded AccuWeather, also runs a hedge fund called Weather Prophets, which has opponents fretting over the possibility that the company and family could profit from inside information that Myers could get by leading NOAA.

"I think that his brother owning the hedge fund in itself disqualifies Barry Myers from being the head of NOAA," Sobien said.

For his backers, however, Myers is a perfect fit, a savvy business leader who can bring a fresh perspective to a federal agency beleaguered by low morale.

"There’s no one person that can have the perfect background to serve as the NOAA administrator — it’s a difficult job," said Conrad Lautenbacher, a retired Navy vice admiral from California who led NOAA for seven years under President George W. Bush.

"It requires scientific knowledge, but it also requires the ability to manage a large organization that has disparate moving parts — and Barry has that skill. … People discount the fact that he’s been a very successful CEO."

‘A deep immersion in science’

Myers, 74, of Philadelphia, has been busy selling himself since Oct. 11, when Trump nominated him to serve as undersecretary for oceans and atmosphere with the Department of Commerce (E&E Daily, Oct. 12).

After Trump waited longer than any other president to nominate a NOAA administrator, the White House touted Myers, who donated $500 to Trump’s presidential campaign last October, as "one of the world’s leading authorities on the use of weather information" (Greenwire, Sept. 21).

Preparing for his upcoming hearing before the Senate Commerce, Science and Transportation Committee, Myers told senators in a questionnaire that his "entire life’s work" has provided the necessary background to become NOAA’s administrator.

"I come with a deep immersion in science, though I am not a scientist," Myers wrote.

But Myers said that he is "one of the few, and possibly the only" non-scientist to be made a fellow of the American Meteorological Society.

And Myers told senators that the society also honored him for working in the weather industry for more than 50 years, as a leader seeking to increase government cooperation with the private sector.

Myers, who took over as CEO of Pennsylvania-based AccuWeather in 2007, has long pushed for more businesses’ involvement with NOAA.

"The private weather sector needs to be supported and nurtured by NOAA for the good of the nation," Myers told a House Science, Space and Technology subcommittee when he last testified before Congress in June of last year.

Appearing before the Subcommittee on Environment, Myers promoted his company, telling lawmakers that AccuWeather is Europe’s top weather mobile source, with its information on more than 1.5 billion devices around the world.

In his questionnaire for senators, Myers called AccuWeather a business that "gives back to the nation every day."

"We work every day to save lives and protect property," he said. "I am proud of this legacy, all inspired by a love of weather, which we all endorsed at an early age and worked regularly, 70- and 80-hour weeks, to make happen."

Myers has plenty of supporters.

At last year’s House hearing, Rep. Dana Rohrabacher (R-Calif.) told Myers and other lawmakers that getting the private sector involved in weather forecasting is "an American story of success," recalling a time in the 1950s when a hurricane hit and the public had little advance notice.

"This is an industry that’s paying for itself in so many ways," he said.

And Sen. Pat Toomey (R-Pa.), who also received a $500 political contribution from Myers last year, praised him and said AccuWeather has developed into the leading weather forecasting service while becoming "an indispensable asset" for his home state.

"Much of AccuWeather’s success can be attributed to the great work of Barry and Joel Myers," Toomey said.

Complaints of a ‘sordid record’

Critics worry that the relationship between the two brothers may be a little too cozy.

Richard Hirn, general counsel and legislative director for the National Weather Service Employees Organization, said in a letter to senators that the hedge fund run by Joel Myers could profit with his brother in charge of NOAA.

Hirn cited an example that Joel Myers described in a 2005 article in InvestmentNews, explaining how an investment manager could benefit by knowing just five minutes in advance if a Category 3 storm would be upgraded to a more powerful Category 4 storm, causing a spike in natural gas futures.

Hirn also told Sens. John Thune (R-S.D.) and Bill Nelson (D-Fla.), the chairman and ranking member of the Commerce Committee, that Myers was "wholly unqualified" for the job because of his lack of scientific credentials and his "sordid record" in business, including AccuWeather’s joint venture with the commercial company owned by the China Meteorological Administration to provide forecasts in China.

"He is literally in business with the Chinese government," Hirn said.

When the deal was announced in 2015, Myers called it "a groundbreaking endeavor with China" and a way to expand AccuWeather’s global reach.

And in an ethics agreement with the Commerce Department, Myers promised to "avoid any actual or apparent conflict of interest" if he gets the job.

He said he would resign from AccuWeather and all of its affiliates as soon as he’s confirmed. With his wife, Holly Myers, also employed by AccuWeather as its director of executive projects, Myers said he would not participate in any matters that would affect either her compensation or employment.

Nelson, who will lead the Democrats in grilling Myers at his confirmation hearing, questioned last month whether NOAA should be headed by a man who might want to "feather their own nest" by privatizing the National Weather Service.

Nelson has a long history with Myers, dating back to 2005, when AccuWeather worked with former Sen. Rick Santorum (R-Pa.) on the bill that would have prohibited federal meteorologists from providing services that competed with private companies such as AccuWeather.

Nelson, who helped block the bill, said he wants "to make absolutely sure any NOAA administrator will put the public first in delivering freely available weather forecasts."

Hawaii Democratic Sen. Brian Schatz, another member of the Commerce Committee, called Myers "a questionable choice" to lead NOAA and said he will have plenty of questions to answer.

"He is in the vanguard of corporate business interests that seek to undermine the National Weather Service’s ability to do anything other than provide free data and weather models to private companies like his, which then turn around and sell their forecasts," Schatz said.

Sobien of the employees’ union said Myers and his company are recipients of "corporate welfare" by getting weather data at no cost and then repackaging and selling it.

"He doesn’t own the mine, but he wants to sell the silver," Sobien said. "Some companies, such as BP or Exxon, they have to actually go out and get their resources and refine it. In the case of AccuWeather, the raw data — the raw resource — they actually get for free from the American taxpayers."

A focus on fisheries

In his questionnaire for senators, Myers noted that weather components make up about 60 percent of NOAA’s budget.

But many environmental groups and lawmakers want to make sure that Myers would be equally focused on NOAA Fisheries, which comprises 3,200 people in five regional offices, six science centers, and 24 labs and fish stations in 15 states and U.S. territories.

Janis Searles Jones, CEO of the Ocean Conservancy, said that Myers will have "to champion all facets of NOAA" if he gets the job, not just weather forecasting.

"The stakes at NOAA are different," she said. "He will have the responsibility to serve the public interest, not just the private interests of a company’s bottom line."

And Schatz said Myers will have to explain how he’s qualified to oversee fisheries "when he does not have any formal scientific education or training."

Myers said he would make fisheries management a top priority. He told senators that he wants to use his corporate leadership skills to focus on two key issues at NOAA: reducing a trade imbalance in fisheries and delivering "the best weather model in the world."

Lautenbacher, the former NOAA chief, defended Myers, saying he will be "smart enough to know to get the right people to help him where he might need more expertise."

Sobien predicted that all Democrats on the Commerce Committee will vote against Myers. If that happens, he said, it will take only one Republican vote to sink the nomination.

But so far, opponents haven’t found it.

"I don’t think we’ve convinced anybody," Sobien said. "But I would hope Republicans on the Senate Commerce Committee would look at their consciences — they know how important the National Weather Service is to their constituents — and hopefully do the right thing."