Trump’s pick for Scalia seat gets sized up 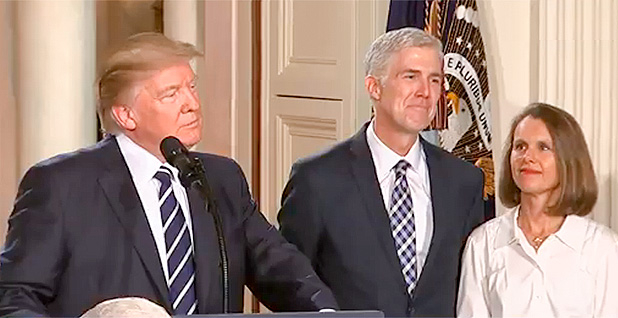 The biggest surprise during President Trump’s announcement of his Supreme Court justice last night may have been that there were no surprises.

After much speculation that the president might have a reality-show-esque event featuring the final two contenders, Trump nominated 10th U.S. Circuit Court of Appeals Judge Neil Gorsuch, a solidly conservative judge, in a straightforward event in the White House East Room.

Trump gave a brief, disciplined speech before handing the podium to Gorsuch, who attended the event with his wife of 20 years, Louise. The whole event lasted just under 13 minutes.

The president said he had studied Gorsuch’s legal writings closely and called them "among the finest, most brilliant writings of any judge in a long time."

Many Republican senators sat in the audience during the announcement. Trump’s sons, Donald Jr. and Eric, were also in attendance.

While the administration held the news of the nomination close, many Supreme Court observers had speculated that Gorsuch would end up being Trump’s final pick. Gorsuch was among a list of 21 individuals that Trump named during his campaign as potential nominees for the post.

"So was that a surprise, was it?" Trump joked as he named Gorsuch last night.

Reaction on and off the Hill

The announcement set off a flurry of reactions, both on and off Capitol Hill. Republicans and conservative organizations rallied around the nominee.

"Like Justice Scalia, he understands the constitutional limits on the authority of a federal judge," said Senate Majority Leader Mitch McConnell (R-Ky.), "and that the duty of a judge is to apply the law evenhandedly, without fear or favor, and not to rule based on one’s empathy with a party in a case."

Within minutes of the announcement, the conservative Judicial Crisis Network announced it launched its first ad buy in a $10 million campaign to confirm Gorsuch. Ads will start in Missouri, Indiana, North Dakota, Montana and Washington, D.C.

Democrats were more varied in their reactions: Sens. Jeanne Shaheen of New Hampshire and Jon Tester of Montana both said they would "thoroughly review" Gorsuch’s qualifications, while Sen. Sherrod Brown of Ohio said unequivocally in a statement that the nominee "doesn’t pass the test" because of a record that is "far outside of the judicial mainstream."

Sen. Jeff Merkely (D-Ore.), who yesterday reportedly threatened to filibuster the president’s pick, accused Trump of choosing an "ideological and extreme nominee to satisfy the far right." He said he would do "everything in my power" to block Gorsuch’s confirmation.

Prior to the announcement, Senate Minority Leader Chuck Schumer (D-N.Y.) said that his caucus would oppose any nominee that’s outside of the mainstream. In a series of tweets after the announcement, the senator said he had concerns with Gorsuch.

"SCOTUS justice must stand up to a Pres willing to bend the Constitution," Schumer said. "Serious doubts on Judge Gorsuch’s ability to meet this standard.’

Environmental groups vowed to oppose Gorsuch, calling on Democrats to dig in against the nominee and block him in the way that Republicans blocked the U.S. Court of Appeals for the District of Columbia Circuit’s Senior Judge Merrick Garland, former President Obama’s nominee (see related story).

Gorsuch is 49 years old — though he sports a full head of gray hair — and would be the youngest Supreme Court justice to join the court since Justice Clarence Thomas, another conservative stalwart who was confirmed at 43 years old.

Gorsuch is the son of the late Reagan-era U.S. EPA Administrator Anne Gorsuch Burford, who resigned after a rocky two-year tenure amid a scandal involving the Superfund program. He attended Georgetown Preparatory School in Washington, D.C., while his mother served in the administration.

Gorsuch now lives in Colorado. If confirmed, he would be the first Supreme Court justice from Colorado since Justice Byron White, whom Gorsuch clerked for after law school. He also clerked for Justice Anthony Kennedy and U.S. District of Columbia Circuit Senior Judge David Sentelle, a Reagan appointee, before practicing as a private attorney.

"These judges brought me up in the law. Truly, I would not be here without them. Today is as much their day as it is mine," Gorsuch said yesterday.

Thomas Lorenzen, a former Justice Department environmental attorney, worked at DOJ during Gorsuch’s tenure and described the nominee as a "delightful person" with a good sense of humor.

"He’s an extraordinarily hard worker, a very fast learner," Lorenzen said. "He was someone we could go to for guidance on the most complex and politically sensitive legal issues. He was always ready, willing and able to provide his counsel on these matters."

Bush nominated Gorsuch to join the 10th U.S. Circuit Court of Appeals in 2006.

"He is not only a principled and brilliant jurist committed to the Constitution, but also a fair-minded and decent man who has earned the respect and admiration of those who know him," said Matt Owen, who clerked both for Gorsuch on the 10th Circuit and for Scalia on the Supreme Court.

Neal Katyal, a former solicitor general in the Obama administration who has cases pending before the Supreme Court, also praised Gorsuch.

"As a judge, he has always put aside his personal views to serve the rule of law," Katyal said. "To boot, as those of us who have worked with him can attest, he is a wonderfully decent and humane person. I strongly support his nomination to the Supreme Court."

Gorsuch yesterday evening said he was "honored and humbled" to be nominated to succeed Scalia, who he has referred to as a "lion of the law" both last night and at a recent lecture at Case Western Reserve University.

At that lecture in April 2016, Gorsuch said he learned of Scalia’s death while on the ski slopes in Colorado.

"I was taking a breather in the middle of a ski run with little on my mind but the next mogul field when my phone rang with the news," Gorsuch said. "I immediately lost what breath I had left, and I am not embarrassed to admit that I couldn’t see the rest of the way down the mountain for the tears."

‘A sea change’ on the horizon?

Gorsuch recently made waves in legal circles with an August 2016 concurring opinion calling for the demise of the Chevron doctrine, a key tenet of environmental law under which courts defer to federal agencies when Congress is silent or ambiguous on an issue.

At times, he’s written opinions denying environmentalists the chance to bring litigation to the court. On the other hand, he penned an opinion in 2015 shooting down a constitutional challenge that the conservative Energy & Environment Legal Institute sought to bring against Colorado’s renewable energy standard.

On the Supreme Court, Gorsuch could play a deciding role in any litigation involving the Clean Power Plan — the Obama administration’s signature climate change policy — and any attempts by the Trump administration to strip EPA’s authority to regulate greenhouse gas emissions.

Ann Carlson, a law professor at the UCLA School of Law, last night wrote that Gorsuch’s opinion on Chevron deference suggests he would not defer to agency interpretations such the Obama EPA’s explanation of its authority to issue the Clean Power Plan.

But she said it was too early to tell whether a Gorsuch tenure on the Supreme Court would mean the end of the legal doctrine — which some congressional Republicans would like to see.

"A repudiation of Chevron deference would mark a sea change in administrative and environmental law, a sea change that current justices on the Supreme Court have not embraced," she said. "Whether Gorsuch could persuade some of his colleagues to reconsider Chevron is not at all clear."