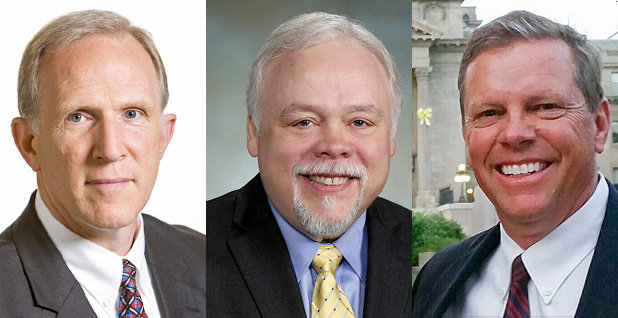 The small groups — known as beachhead teams — will lay the groundwork for the new administration’s policies and serve as White House representatives until Cabinet officials are confirmed and bigger teams dispatched. At energy and environmental agencies, the teams are largely composed of Trump campaign officials and aides who served on the so-called landing teams at various agencies between Election Day and Inauguration Day.

The beachhead teams are temporary government posts, although some of those officials may be asked to stay on after their initial 120-day appointments.

Heading the group of new appointees at EPA is former Washington state Sen. Don Benton, who was Trump’s campaign chairman in the Evergreen State, according to a source close to EPA.

Benton, who served in Washington’s Senate from 1997 until last year, is known for "self-confidence, at-times bombastic rhetoric and a willingness to get into political brawls," The Seattle Times reported. Trump and Benton bonded when Trump visited Washington state last May, and they shared a McDonald’s lunch. "I had a Filet-O-Fish and he had a Big Mac," Benton told the newspaper.

Benton founded a sales and marketing firm and has a bachelor’s degree in management and communications. According to his state Senate website, he "has dedicated his legislative career to protecting property rights, reducing property taxes and putting criminals behind bars."

Several former members of the Trump EPA transition team have stayed on.

Those include David Schnare, general counsel at E&E Legal who has been a thorn in the sides of environmentalists and the Obama administration; David Kreutzer, a senior research fellow at the Heritage Foundation who has recently written articles critical of climate change policies; and George Sugiyama, a former EPA employee who served as counsel to the EPA air chief during the George W. Bush administration (E&E Daily, Dec. 6, 2016).

Also on EPA’s beachhead team are Holly Greaves, a senior manager at auditing firm KPMG, and Justin Schwab, an associate at BakerHostetler, according to the source close to EPA.

The Trump transition team fleshed out an action plan for EPA that lays out targets for slashing budgets and regulations, the media company Axios reported today.

Among the key initiatives to stop, according to those plans, are greenhouse gas rules for new and existing power plants, automobile standards, and the so-called Waters of the U.S. rule. The plan also calls for an executive order "barring EPA from overruling federal/state regulatory/permit decisions unless in clear violation of established law," Axios reported.

Myron Ebell, who headed EPA’s Trump transition team, said today in an interview that he had seen press reports about that plan but wasn’t sure whether the plan cited was the most up-to-date.

"There is nothing surprising in the plan because it simply implements the promises made by President Trump on the campaign," Ebell said.

John Konkus, who’s working on Trump EPA nominee Scott Pruitt’s confirmation team, said today, "Neither Mr. Pruitt or I have seen any such plan. The views of the nominee for EPA administrator were laid out in detail at his hearing last week."

Several transition team members from DOE are staying on to serve on that agency’s beachhead team, according to sources close to the transition.

The transition team members sticking around include Travis Fisher, an economist at the Institute for Energy Research and former economist at the Federal Energy Regulatory Commission; Mark Maddox, a consultant at the Livingston Group LLC and former acting assistant secretary of fossil energy at DOE during the George W. Bush administration; and Martin Dannenfelser Jr., formerly of the Energy Innovation Reform Project.

William Greene, deputy director of government affairs at Safari Club International, who was outreach director for former House Speaker John Boehner (R-Ohio), and Daniel Simmons, vice president for policy at the Institute for Energy Research and former director of the natural resources task force at the American Legislative Exchange Council, will also stay on at DOE.

Tristan Abbey, a former Republican staffer on the Senate Energy and Natural Resources Committee, will also be on DOE’s team, according to a source close to the transition.