Trump’s repeal is coming. Industry is watching the clock 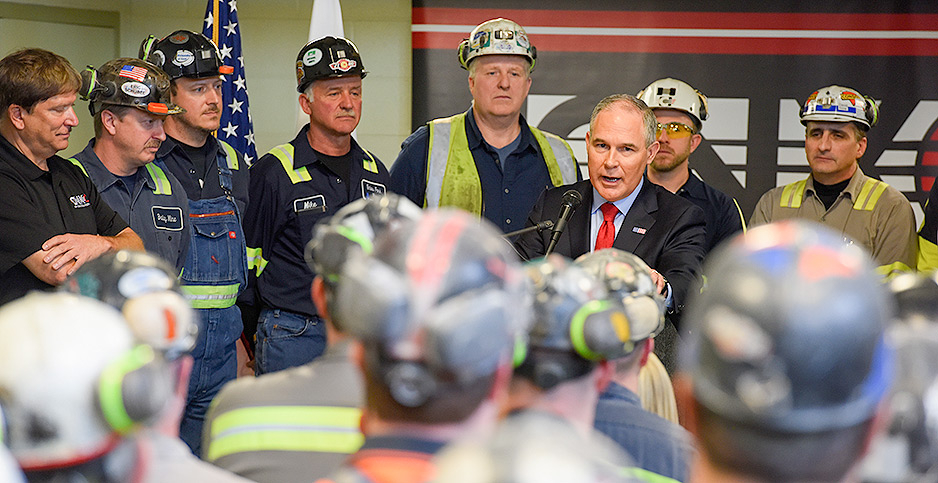 U.S. EPA Administrator Scott Pruitt seems poised to drag out the finalization of a new rule on greenhouse gases. Some industry groups want it faster. EPA

Industry has a message for U.S. EPA as it prepares to scale back the Clean Power Plan: Do it right, and do it quickly.

But there are competing ideas about what that means. And some question whether taking time to sort things out could mean the Trump administration effectively punts the issue to the next president.

EPA will soon issue a notice that it’s repealing President Obama’s signature domestic climate policy, while simultaneously asking for comments about how to replace it. An eventual proposal is expected to leave some sort of regulation of power plants’ carbon dioxide emissions in place.

There’s always tension between constructing legally sound regulations and getting rules out quickly. The move to take comments — by putting out what’s known as an advanced notice of proposed rulemaking — underscores that dynamic and has split industry. While most industry officials E&E News consulted said they were fine with the step, some lamented that it adds time to a process that they’ve already described as slow and sluggish.

"It just takes a lot of time to do regulatory action, and at this point, if you’re already not moving quickly … and if it’s just one term, you are running out of time," a utility industry official said.

An advanced notice isn’t required by law, though it’s seen as a way to demonstrate a good-faith effort to consult diverse interests before writing a rule. To the strategy’s supporters, that could shield EPA from quickly ending up in court.

"If you just punched out a piece of the old rule, somebody would have come in and said that’s problematic," a litigator familiar with the Clean Power Plan said. Some observers speculate that the administration’s preferred course of action is to set new efficiency standards for power plants — which is one part of the broader Obama-era rule.

Some industry officials are concerned the lengthier process may mean the Trump administration, if it lasts just one term, won’t be able to defend its rule if it ends up in court. A Democratic successor could potentially wipe away the proposal and then work on a stricter rule.

Adding to that, some question whether EPA Administrator Scott Pruitt genuinely wants to construct a replacement rule. It’s possible the EPA chief won’t push to complete an alternative rule in a timely manner, leaving electric utilities trying to plan investments in the lurch.

"It’s an open question now how much of a priority a proposed rule is and how quickly it can be done," the utility industry official said. "That’s a fair question right now, and that’s obviously a question for us. And I’m sure some folks would like it to be done more quickly."

Janet McCabe, who led EPA’s air office under the Obama administration, said in her experience, industry wants certainty from the agency.

"I don’t think this is good for business to have such a whipsaw in terms of backtracking or retracting recently adopted policies," she said. "We worked very, very closely with industry on all of our rules."

She noted that by starting with an advanced notice of proposed rulemaking and soliciting broad comments, the Trump administration is adding an extra step to an "already lengthy" rulemaking process. The extra step "is a way legitimately to solicit a wide range of views," but "I don’t know that anybody would feel like this extra opportunity to comment would likely be very successful in any sort of a dramatic change in the policy direction that has been articulated pretty explicitly" by the Trump administration.

The Obama administration spent more than two years on the Clean Power Plan. Obama directed EPA to start the rules in June 2013; the agency issued a proposed rule in June 2014 and a final rule in August 2015.

Lawsuits can add delays, too. Even if Trump finalizes a replacement rule, McCabe added, it’s "likely to draw legal challenges."

Some of Trump’s most vocal allies in the energy sector are also on the opposite side of industries calling for a replacement rule.

"Our position has always been we want a full repeal," said Gary Broadbent, a spokesman with Murray Energy Corp. "And if they decide to replace it with something, we will review that."

Murray Energy CEO Bob Murray, a close ally of Trump, appeared at EPA in March when Trump signed an executive order directing the agency to review the Clean Power Plan.

Manufacturers, especially those in energy-intensive industries that must budget for power price swings, are looking for a clearer picture on the regulatory front, said Ross Eisenberg, vice president of energy and natural resources policy with the National Association of Manufacturers. He called the move to go with an advanced notice of proposed rulemaking "a bit of a surprise," but was supportive of getting some sort of federal climate change regulation on the books.

"This isn’t the only climate policy being debated," he said, referring to state and regional climate efforts, as well. "This all kind of plays together, and depending on where you are at the country, at the end of the day — just like every thorny issue — manufacturers just want to know what the rules of the road are."

Regardless of the rule, utilities are making investments that are reducing power plant emissions, the utility industry official noted. That activity is likely to continue, the official said, noting that many power companies aren’t waiting for the administration.

Heath Knakmuhs, senior director for policy at the U.S. Chamber of Commerce’s Global Energy Institute, noted utilities already are making investments on 20-year time horizons. He said he wasn’t concerned about snags in the rulemaking process so long as the Obama version — which called for a 32 percent power-sector emissions reduction below 2005 levels by 2030 — disappeared.

The important thing for utilities, Knakmuhs said, is that there’s discernible movement toward some rule — even if some of the president’s allies in the coal industry object.

"I’m aware that there are a diversity of views on what should occur, but I know that the overwhelming … balance of our membership views both the uncertainty and the potential liability for always being subject to tort citizen-state suits at every power plant across the country is not a preferable option," he said.

Columbus, Ohio-based American Electric Power Co. said future carbon regulations have factored into its resource planning but that those investments aren’t guided by any one policy.

"Our planning has not been based on what has been happening with the Clean Power Plan," spokeswoman Melissa McHenry said in an email, noting the utility’s fuel mix has shifted from 70 percent coal in 2005 to 47 percent today, helping to reduce carbon emissions 44 percent since 2000. "It is a long-term strategy based on adding cleaner energy resources to diversify our fuel mix and for the benefit of our customers."

National Grid PLC spokeswoman Paula Haschig said in an email, "We have long supported federal regulatory initiatives, including the CPP in its original form. That said, regardless of what happens at the federal level, we remain committed to our states’ … ambitious GHG [greenhouse gas] reduction goals."