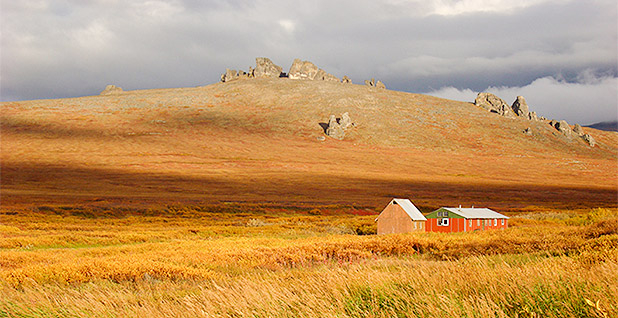 The National Park Service has worked for decades to make this bunkhouse in Alaska's Bering Land Bridge National Preserve part of a larger transboundary park with Russia. Photo courtesy of NPS.

With increased scrutiny of the Trump administration’s possible ties to the Kremlin, a long-running National Park Service effort to promote cultural and scientific connections between native groups in the United States and Russia could be targeted for elimination, budget experts say.

Proposed by NPS and quickly embraced by President George H.W. Bush and Soviet leader Mikhail Gorbachev, the Shared Beringian Heritage Program has worked for over 26 years to fund research in the Bering Strait region and explore the possibility of a protected area spanning parts of Alaska and the Russian autonomous district of Chukotka.

"There’s a real possibility that a lot of things about U.S.-Russia relations could come under the microscope in the coming months and years because of all the suspicions around Trump and his team and their dealings with Russia," said Philip Wallach, a senior fellow in governance studies at the Brookings Institution, a centrist think tank.

Top members of the Trump administration communicated with Russian officials during the 2016 presidential campaign, which was marred by Russian cyberattacks on the Democratic National Committee. While the White House has denied or downplayed the contacts, they have raised questions in both Congress and the U.S. intelligence community about the new administration’s links to Russian President Vladimir Putin.

The fallout from that international intrigue could hit Inuit communities on both sides of the strait, which traveled freely between countries before the rise of the so-called ice curtain during the Cold War between the Soviet Union and the United States.

"Given the current political climate, I could see it getting killed off," Wallach said of the Shared Beringian Heritage Program.

The program has survived previous brushes with death. For instance, after a failed coup forced Gorbachev to step down in 1991, high-level support waned for a transboundary park to cement the peace between Moscow and Washington.

Since then, the Shared Beringian Heritage Program has worked largely in obscurity to build on the historical links between the region’s Inuit groups. Many of Alaska’s Natives are believed to be descendants of people who immigrated over a now-submerged land bridge that connected the Asian and North American continents during the last ice age.

The NPS initiative has typically one to three employees and an annual budget of around $600,000. Those staff and resources have supported over 150 projects and several bilateral conferences.

The program was thrust back into the international spotlight when the Obama administration sought to improve relations with Russia — a strategy symbolized by a red button emblazoned with the word "reset" that former Secretary of State Hillary Clinton gave to Russian Foreign Minister Sergei Lavrov in 2009.

Two years later, President Obama and then-Russian President Dmitry Medvedev issued a joint statement on the sidelines of a Group of 8 summit "recognizing the many successes of the ‘Shared Beringian Heritage Program’ in better understanding our shared history and sustaining the cultural vitality of the native peoples in the Central Bering Strait Region today."

Those plans, the statement said, included "expansion of interaction between the national agencies that are responsible for the specially protected natural territories/areas of both countries in the State of Alaska and the Chukotka Autonomous District" and commitments to develop "a dialogue with native peoples to help determine the specific goals and methods for such cooperation."

Then in September 2012, a few months after Putin had been re-elected to lead Russia, Clinton and Lavrov "agreed to pursue a Transboundary Area of Beringian specially protected natural territory" that would link Russia’s soon-to-be-created Beringia National Park with the Bering Land Bridge National Preserve and Cape Krusenstern National Monument in Alaska, the State Department said at the time.

The agency said in a press release that joining the Russian and U.S. parks would "promote conservation of flora, fauna and the natural ecosystem; preservation of kinship ties, cultural traditions, subsistence lifestyle and language of the indigenous peoples of the region; and collaboration on conservation, management scientific research, and effective monitoring of the environment." It planned to formalize the transboundary agreement by the end of that year.

But discussions between the erstwhile Cold War adversaries dragged on well past that deadline. When a memorandum of understanding (MOU) was finally reached, Alaskan members of Congress objected to the tentative deal (E&E Daily, Oct. 31, 2013).

Finally, as tension rose between pro-Western and pro-Russian forces in Ukraine, the memo was quietly shelved.

"Once the Crimea invasion happened, that was the end of the MOU," said Rudy D’Alessandro, an international cooperation specialist at the Park Service, referring to the March 2014 takeover and annexation of a Ukrainian peninsula by Russia. "The MOU was never signed."

Yet the Beringian initiative, with its ultimate aim of a park spanning the strait, continues.

"I’m going to do what I can to move that forward as a peace park, as a transboundary unit" of the national park system, said Ian Buvit, a former Central Washington University anthropology professor who has led the Beringian program for NPS since last October.

"I don’t know how effective I’ll be," he added. "It might take me years to even get a voice here in the office where I can stand up for this. But as long as I’m here, I’ll continue fighting for it."

In the meantime, Buvit is preparing to host a "Beringia Days" gathering in 2018 — the program’s first conference since 2013 — and is funding 14 projects, including one that has attracted the attention of a congressional budget hawk.

"Someone must have been really excited about Fox’s reboot of the X-Files because the National Park Service is spending $150,000 of taxpayer money to investigate supernatural events in Alaska," Sen. Rand Paul wrote last year in a "waste report" about federal spending he opposes.

The Kentucky Republican was criticizing what NPS described as a three-year study of "Bering Strait Inuit residents’ beliefs and knowledge about (and experiences with) the supernatural environment, and to examine the roles these play in guiding interactions with animals, the landscape and the environment in general."

Kawerak Inc., a nonprofit corporation in the Bering Strait, won the educational cooperative agreement. It will collaborate with 17 of the 20 tribes in the Beringia for community meetings, storytelling nights and focus groups. In the end, Kawerak must produce a book manuscript and an archive of its recordings (E&E News PM, March 30, 2016).

"Some diligent staffer or intern turned this up as something that sort of tickled their funny bone," he said of the supernatural project. "It does not necessarily indicate that these things are actually on the chopping block."

At the same time, however, early reporting on the Trump administration’s budget cutting plans for the Interior Department, of which the Park Service is a part, suggest no spending programs are entirely safe (Greenwire, Feb. 28).

"It’s possible there will be some kind of serious house cleaning that would be able to go down on the level of little programs," Wallach said. "If there was some big, systematic attempt to scrutinize everything that has to do with Russia — it seems more likely that it would get caught up in a sweep like that than just that conscientious budget cutters would single it out as something worthy of cutting."