Trump’s sister likes EPA better than he does 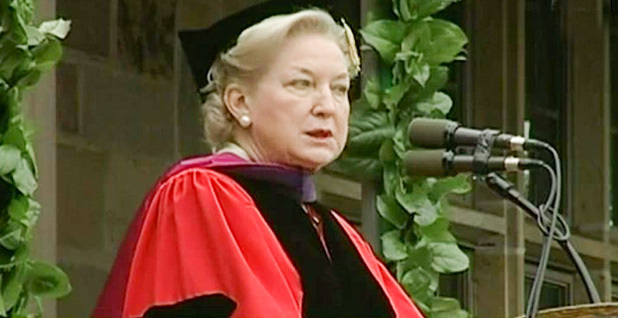 In 1987, Maryanne Trump Barry — then a federal district court judge appointed by President Reagan — chastised the city for placing itself "above the courts" when it failed to comply with court orders demanding that the city stem the flow of garbage drifting over from a Staten Island landfill, The New York Times reported. Barry said she was prepared to shut down the landfill, which handled most of the city’s trash output, and she later oversaw the cleanup settlement in which New York City agreed to pay $1 million and clean up the nearby New Jersey shoreline.

The late Sen. Frank Lautenberg (D-N.J.) praised Barry (a New York City native) years later, when she had been appointed by President Clinton to a seat on the 3rd U.S. Circuit Court of Appeals.

"New Jersey residents are particularly proud of her decision holding New York City responsible and in contempt for failing to obey a court order designed to prevent garbage and medical waste from New York’s Fresh Kills Landfill from drifting onto New Jersey’s shore," Lautenberg said on the Senate floor in 1999, just before she was confirmed unanimously to the bench by the GOP-controlled Senate.

Her younger brother isn’t getting much love from Democrats or environmentalists these days. Greens are mobilizing against the presumptive Republican nominee, who has suggested scrapping U.S. EPA and referred to global warming as "bullshit." But Barry — who Trump has floated as a possible Supreme Court nominee and who gives her brother advice — has a track record of cracking down on pollution and siding with federal agencies in several environmental cases that have come before her.

Trump said last year that he would "love to" appoint his sister to the Supreme Court, but that she wouldn’t be interested, The Washington Post reported. Trump later backtracked, saying he had been joking after he came under fire on the campaign trail. Former presidential candidate Sen. Ted Cruz (R-Texas) called Barry "a Bill Clinton-appointed federal appellate judge who is a radical pro-abortion extremist" earlier this year, according to the Post, referring to her controversial 2000 opinion finding that a New Jersey law banning some late-term abortions was unconstitutional. Trump has since released names of 11 candidates he’s said he’d consider for the Supreme Court; Barry wasn’t on the list.

She has, however, advised her younger brother during his campaign. When Trump sparked a firestorm for his implication that Fox News anchor Megyn Kelly had been menstruating during a presidential debate, his sister called him to offer some advice, the Times reported. "She called me to say she’s very proud," Trump told the paper. "She said, ‘Just be yourself.’ Of course, I don’t know if that’s good advice, but she said, ‘Just be yourself and you do well, really well.’"

Unlike her younger brother, Barry doesn’t seek the limelight. "I’m a private person," she said in a 2011 commencement address at Fairfield University — one of her rare public speeches. She declined to comment for this story.

Barry, 79, is the eldest of the five Trump siblings (the oldest brother, Fred Jr., died in 1981 at the age of 43). She has long sported a signature curly blond coif whose flamboyance rivals that of her brother. She’s known for chain smoking and driving a Jaguar, according to the Times. She’s been on the 3rd Circuit since her 1999 appointment, although she took senior status on the court in 2011.

The 3rd Circuit is based in Philadelphia, but Barry’s chambers are in Newark, N.J., in the courthouse named for Lautenberg. Her record on environmental issues isn’t extensive, perhaps because the 3rd Circuit — which encompasses Pennsylvania, New Jersey and Delaware — doesn’t have a heavy environmental caseload.

"The 3rd Circuit is no hotbed of environmental litigation," said Matthew Stiegler, a Philadelphia attorney who blogs about federal appellate law.

She has, however, been involved in several rulings involving federal agencies’ environmental decisions. In a handful of such cases, she sided with the agencies, rejecting challenges from industry groups and environmentalists alike.

"She starts with the presumption that agency actions are valid, and it’s going to take some convincing to get her off that position," said Pat Parenteau, a professor at Vermont Law School who reviewed some of her environmental opinions on the appeals court. "She certainly doesn’t come at these environmental questions with a bias that either EPA or any of the other agencies … are out of control or overreaching."

Some of the most significant environmental cases Barry has heard include lawsuits over culling deer, protecting shorebirds and cutting power plant pollution.

In 2011, Barry wrote an opinion shooting down animal rights advocates’ complaints about the National Park Service’s plans to use sharpshooters to cull the Valley Forge National Historical Park’s deer population.

The animal rights groups said the Park Service failed to properly consider alternative plans, in part because it didn’t consider increasing the coyote population. That violated the National Environmental Policy Act, the groups argued. But Barry wrote for a unanimous three-judge panel that the Park Service had complied with the law by determining that coyote predation was an unreasonable alternative.

"We were disappointed that we didn’t win on our appeal," said Kevin Lynch, an assistant law professor at the University of Denver who represented animal rights groups in the case. "The decision was definitely a very deferential one to the agency." Barry’s opinion marked an improvement over a lower court’s decision, in which the district court judge didn’t understand his clients’ perspective, Lynch said. "They went the extra step to actually look through the record," he said of the appeals court.

Barry sided with the government in another case in 2009 over conservationists’ objections that the Fish and Wildlife Service had violated the Endangered Species Act when it denied their petition to list a migratory shorebird as endangered on an emergency basis.

Groups led by the American Bird Conservancy argued that the government should have acted urgently to extend protections to the red knot, a shorebird that migrates every year from wintering grounds in Argentina and Chile to breeding grounds in the high Arctic. The birds’ trip includes a stop in the Delaware Bay to feed on horseshoe crab eggs in the spring. But surveys showed the red knot’s population declining, a drop attributed in part to overharvesting of horseshoe crabs.

Conservationists said the decision not to list the red knot on an emergency basis was "arbitrary and capricious," and therefore illegal. But Barry, who wrote the court’s unanimous opinion, disagreed. The red knot had since been added to the FWS watch list, she wrote, and "the appellants have received quite substantial relief." The court dismissed the appeal, finding it was moot.

In 2013, Barry joined two of her colleagues in an opinion that upheld an EPA rule to limit a Pennsylvania power plant’s pollution, which affected air quality in New Jersey. The owner of the power plant argued that the rule violated the Clean Air Act, but Barry agreed the agency had the authority to crack down on interstate pollution.

And earlier this month, Barry authored a decision siding with the Transportation Department in a case where developers argued that a highway project didn’t comply with environmental requirements.

In that case, property owners hoping to develop a shopping center argued that a highway project would impede their development goals. Barry and her colleagues rejected the complaint, finding that the developers had improperly sought to challenge the project under the National Environmental Policy Act. Environmental interests weren’t central to their complaint, the judges wrote, but were only "fortuitously aligned with their stated interests." The appeals court affirmed a lower court decision dismissing the developer’s complaint.

Based on the environmental opinions she’s authored, Parenteau said, Barry "strikes me as kind of a down-the-middle judge, applying administrative law principles and reaching conclusions that are understandable, pretty straightforward."

"Judge Barry is seen as a mainstream centrist," he said. "What she really cares about is everybody doing their job right. … I think she’s a nuts-and-bolts judge, not a crusader."

He said that’s true even in the abortion opinion she wrote, where she was joined by her then-colleague Judge Samuel Alito, who’s now a conservative Supreme Court justice. "She’s not a judge who’s looking to write big sweeping, important decisions," Stiegler said.

Even when she was cracking down on New York’s roving garbage in the late 1980s, Barry wasn’t viewed as an environmental champion, said David Mandelbaum, a Philadelphia attorney who represented environmentalists in the lawsuit against New York City.

"I don’t think she was really thinking of it that way at all," said Mandelbaum, who is now an attorney at Greenberg Traurig. "That was more like a conventional tort. There was trash falling in the water, and not a little bit of it." He recalled when she scheduled a site visit to the dump in August, to the surprise of the lawyers working on the case. The male attorneys purchased inexpensive, "kind of disposable suits" for the summer visit.

Barry was the first person in her family to graduate from college. She studied political science and government at Mount Holyoke College — a liberal arts women’s college in Massachusetts — graduating in 1958.

"My first year was tough. I was desperately homesick; I was scared, and I didn’t do very well that year," she said in the 2011 commencement address. She went on to "become a full-time mother," she said, and entered law school years later. She graduated from Hofstra University School of Law in 1974.

"Between then and now, there were some very tough years that only my son and I really know about. It has been said whatever does not destroy me makes me stronger."

She had a son with her first husband, David Desmond, whom she divorced. She married John Barry in 1982; he died of cancer in 2000.

Barry also recalled how she lost her husband and her parents "within a year of each other" in 1999 and 2000, around the time she was appointed to the appeals court.

"Neither of my parents had English as a first language," she said. Her mother was an immigrant from Scotland, and her father’s parents were born in Germany. "My father’s father died when he was a teenager, and Dad went to work to support his mother and two siblings, as a carpenter and as a builder’s mule, hauling carts of lumber to construction sites when it was too icy for the mules to climb the hills."

Barry’s mother, the daughter of a fisherman and the youngest of 10 children, came to the United States at age 19 to work as a nanny.

In 2008, Barry and her brother traveled together to visit their mother’s former island home, reported The Telegraph, a U.K. newspaper. They arrived in his private jet with "TRUMP" in large gold letters on the side.

The Trump campaign did not respond to a request to comment for this story. But in public, at least, it appears as if the judge has different priorities in life than the real estate mogul-turned-presidential contender, who frequently boasts about his wealth and business acumen.

"When I speak of success, I don’t speak only of professional success," Barry told the graduates in 2011. "Success can be as simple as the warm feeling one gets, if you see a stranger that you sense to be lonely and smiling at that stranger and have that stranger return your smile. It can be bringing a child into the world and raising that child to be a good man, or a good woman. I have always said my greatest success is my son."