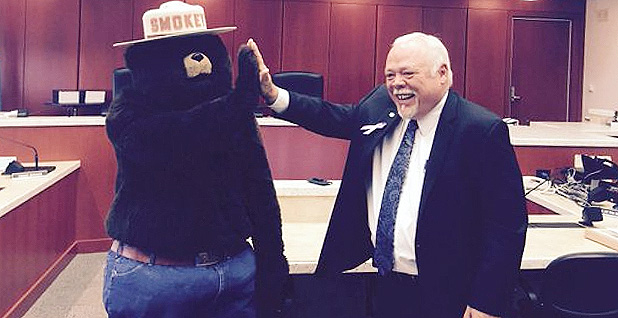 Don Benton, a Trump aide working at EPA, tweeted about meeting Smokey Bear in 2015. Photo courtesy of @BentonforSenate via Twitter.

President Trump’s top political aide at U.S. EPA has been described as "bombastic," "tornado-like," a "rabid dog" and "an environmentalist."

Don Benton, a former Washington state senator, was Trump’s campaign chairman in the Evergreen State. This week, he was dispatched to EPA as a senior White House adviser overseeing the transition to the new administration.

Benton and another new Trump appointee at EPA, White House liaison Charles Munoz, issued a statement yesterday thanking EPA for the "warm reception" they had received.

"We are looking forward to working with the career professionals at the EPA to make this transition work as well as possible, and to carry out the Agency’s mission to protect public health and the environment. We know and understand the incredible knowledge level and commitment of the people who work here. We will be asking you for help. We are committed to working with you. While transitions are always hard, straight forward honest communication combined with respect for each other will make the process work much better," Benton and Munoz said in the memo from EPA’s acting Administrator Catherine McCabe (see full text below).

As with other members of so-called beachhead teams heading into federal agencies this week, it’s unclear whether Benton’s appointment will be temporary or whether he’ll stay on at the agency after Trump’s pick for administrator, Oklahoma Attorney General Scott Pruitt (R), moves in and brings in a bigger political team. Across the government, the Trump administration has brought in political aides with 120-day appointments that could be extended.

Benton isn’t well-known on the national political scene, but he’s known back home for his big personality.

Ahead of his retirement last year, his colleagues took to the floor of the Washington Senate to bid him farewell, The Columbian of Vancouver, Wash., reported last March.

One of his fellow Republicans called him a man who could turn from a "rabid dog" to "the most helpful person in the universe."

Some colleagues referred to him as "Diamond D" or "Uncle D," a person with a "tornado-like force in the Senate."

Another Republican said of Benton, "A person with passion is bombastic." And a Democratic colleague said, "A lot of people don’t realize he’s an environmentalist. He really is."

He’s no stranger to controversy.

In 2014, Benton was at the center of a public fight with a colleague over an infrastructure project.

State Sen. Ann Rivers, also a Republican, alleged that Benton called her a "trashy, trampy-mouthed little girl" during a personnel meeting with state Senate leaders, The Columbian reported. Benton said Rivers had sworn at him, and he filed a workplace complaint against her. Officials within the Washington Legislature found that they were both to blame for using offensive language.

Benton was at the center of another flap in 2013, when he was appointed to be the director of Clark County Environmental Services, an agency that handles environmental permitting. His appointment prompted a local firestorm, and one Clark County Clean Water Commission member resigned in protest, the East Oregonian reported.

Two of the county commissioners — both Republicans — voted to appoint Benton to the job, without posting the position. Democratic Clean Water Commissioner Steve Stuart called the move "political cronyism," The Columbian reported.

Benton was the founder of an advertising and marketing firm who started his career in Washington politics in 1994 when he was elected to the state House. He has a bachelor’s degree in management and communications from Portland’s Concordia University and was Washington state chairman of the American Legislative Exchange Council.

A 2008 review by The Columbian gave Benton a 27 percent lifetime score on his pro-environmental votes but a 46 percent score for the 2007 and 2008 legislative session.

In 2013, he was one of 12 Republicans in the state Senate to vote for Democratic Gov. Jay Inslee’s proposal to study ways for the state to reduce greenhouse gas emissions, reported The Olympian of Olympia, Wash.

Asked in 2013 about Inslee’s focus on climate change, Benton told The Seattle Times, "I think there are greater, more pressing priorities at the moment." He added, "I think we need to look long term, and do little things that add up over time that will benefit and help the climate change situation and the environment. But they are long-term strategies."

Benton told the Seattle newspaper last year that he had started out favoring GOP presidential candidates Trump, Carly Fiorina and Ben Carson. He ultimately picked Trump "because he is unconventional," Benton told the paper. "He is not swayed by political correctness. He will tell you what he really thinks."

Here’s the full text of the memo sent to staff yesterday by EPA’s acting administrator:

Today we welcome to EPA members of President Trump’s beachhead team. Acting Deputy Administrator Mike Flynn and I will work closely with them as they transition into the Agency.

"As the leaders for the new Administration on EPA transition, we would like to say thank you for the warm reception that we have received. We are looking forward to working with the career professionals at the EPA to make this transition work as well as possible, and to carry out the Agency’s mission to protect public health and the environment. We know and understand the incredible knowledge level and commitment of the people who work here. We will be asking you for help. We are committed to working with you. While transitions are always hard, straight forward honest communication combined with respect for each other will make the process work much better."

Listed below are the names and short bios of those currently serving on the transition team.

Please join me in welcoming our new colleagues to EPA.