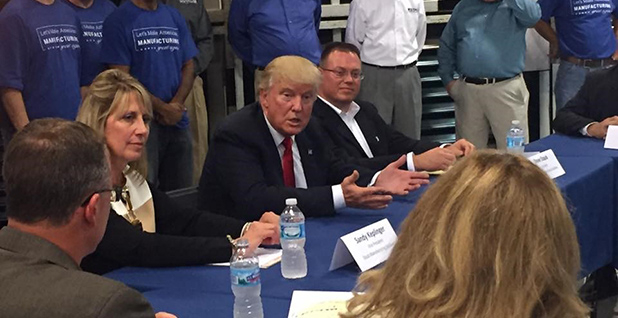 President Trump put his confrontational international trade agenda at the top of his goals for 2018, previewing for members of Congress a series of upcoming showdowns expected with China, the nation’s North American neighbors, and other trading partners that may sharply test his promise to elevate U.S. manufacturing output and employment.

Past trade agreements have "sacrificed our prosperity and shipped away our companies, our jobs and our wealth," Trump said last night in his first State of the Union address to Congress. "The era of economic surrender is totally over," Trump said, with his trademark "America First" characterization of the impact of globalization on the U.S. economy.

To pass the tax legislation that he hailed in the speech last night, to Republicans’ boisterous cheers and Democrats’ stony silence, Trump needed only the GOP majorities in the House and Senate.

To push his trade agenda, however, Trump must find deals with Asia’s hard-nosed competitors and stiff-backed North American Free Trade Agreement partners Canada and Mexico, producing agreements that keep the U.S. economy and markets growing while shrinking U.S. trade deficits, without touching off trade conflicts that would undermine his first-year successes.

"I don’t think he tipped his hand last night as to exactly what he’ll do," said Rufus Yerxa, president of the National Foreign Trade Council and a former U.S. trade negotiator. "But there is lot of expectation of developments on China."

Trump targeted China this month when he slapped a four-year tariff regime on solar cells and modules made abroad, a blow for U.S. energy companies that rely on imported solar panels but also a clear message on Trump’s willingness to impose sanctions.

Awaiting a decision by Trump is a report by the Commerce Department on whether foreign steel mill product and aluminum imports threaten U.S. national security by undermining domestic production of critical components. If the conclusion is yes, as experts expect, it would serve as a premise for trade restrictions. The administration has also been gathering evidence of China’s mercantilist policies that force American companies to turn over technology and trade secrets in order to have access to China’s huge market that could also trigger action.

Trump didn’t hide his complaints with China in his remarks at the World Economic Summit in Davos, Switzerland, last week. "The United States will no longer turn a blind eye to unfair economic practices, including massive intellectual property theft, industrial subsidies and pervasive state-led economic planning," he said.

U.S. restrictions on Chinese imports and export controls on transfers of U.S. technology could bring China to the negotiating table — in theory. Most trade experts are skeptical, at best, about the outcome.

"The president loves tariffs. Clearly on the table are tariffs on something and somebody," said William Reinsch, a trade expert at the Center for Strategic and International Studies (CSIS).

"There are levers to try to do it. I don’t think it will succeed. It’s more likely to make things worse. It is hard to see an action that reduces trade deficits," he said.

"I think he’s more likely to go after them on investment issues. The issue is forced technology transfer and technology theft," Reinsch said.

"It’s a lot tougher [for Trump] because of some of the other decisions," Yerxa said, naming Trump’s go-it-alone abandonment of the Trans-Pacific Partnership trade negotiations and the fracas he’s created with existing U.S. free-trade partners. "It’s going to be harder to mobilize other countries in pressuring China."

"I understand the frustrations of this administration" toward China," said Nariman Behravesh, chief economist at consulting firm IHS Markit Ltd. "Indeed, they don’t play by the rules."

Still, Behravesh said the United States should expect China to retaliate, and that will have consequences. "It hurts the U.S. economy. We don’t need price increases," he said. "You see who is going to pay the price: consumers."

The challenge of threading that needle is apparent in the energy sector. Steel prices have already begun to climb, helping domestic steel producers. But the steel prices that must be paid by companies that manufacture steel products going into pipelines, refineries, power plants, high-voltage towers, wind turbines and energy export terminals will go up, too, and these costs come home to consumers.

Following the tradition of presidential State of the Union speeches, the White House invited guests to sit in the gallery as examples of the policy and political points that anchored Trump’s speech.

The guests included Sandy Keplinger and her brother Steve Staub, owners of Staub Manufacturing Solutions of Dayton, Ohio, and their employee, welder Corey Adams. In their case, it was a return invitation following Trump’s visit to their factory during the 2016 campaign.

"A small, beautiful business," Trump said, pointing to the trio. "They just finished the best year in their 20-year history. They are hiring an additional 14 people and expanding into the building next door."

The company fabricates steel products and produces steel parts with a high-speed 3-D laser cutter. If Trump succeeds, such companies would have more room to grow. Staub’s process starts with steel, however, and if Trump’s aggressive trade strategy backfires, those prices will rise and, at some point, could hit a tipping point that hurts the company’s business.

"In just the last few years, we have been forced to abandon more than 40 percent of the OCTG products we previously made," Rintoul said, with the closure of half the division’s mills since 2014. At the same time, he said, South Korea and China throw impassable barriers to U.S. exporters in that market.

But from the other side came 18 U.S. companies that purchase steel for their products lines. Only a few American mills make what they need, the companies said in a joint statement. Without imports, "our ability to compete will be reduced or eliminated," they said.

American manufacturers’ intellectual property, from patents and trade secrets to accumulated know-how, is crucial to the development of advanced energy systems and controls. Protecting that resource by forbidding its export would serve a defensive purpose, but it could also keep U.S. manufacturers out of China’s booming market for clean power generation, electric vehicles and digital energy controls.

The United States imported $388.6 billion in goods from China in 2016, according to data from IHS Markit’s Global Trade Atlas in an IHS blog report. U.S. companies shipped $132.4 billion of American-made goods back to China. In Trump’s view, that is an unfair tilt of the playing field. But seen the other way, U.S. shipments to China have climbed more than 50 percent since 2011, a success story for American producers on that side of the equation.

"The rumor is, if there are U.S. tariffs, it will be on consumer electronics’ products," said CSIS’s Reinsch, adding that if the Chinese respond in kind, agriculture and aircraft are the likely targets.

"The Chinese are very clever," Reinsch said. "They specialize in tit for tat. If there is a tariff fight, they will calibrate to maximize the political pain here and minimize the costs to them. They have alternatives [to U.S.-sourced products] and can send a message."

Behravesh, the IHS economist, said the chances of an all-out trade war are low. "But inadvertently, could you back into that," he warned.

"So far, they have talked a tough talk," Behravesh said of the president and his trade team. "We’ll see what they do."