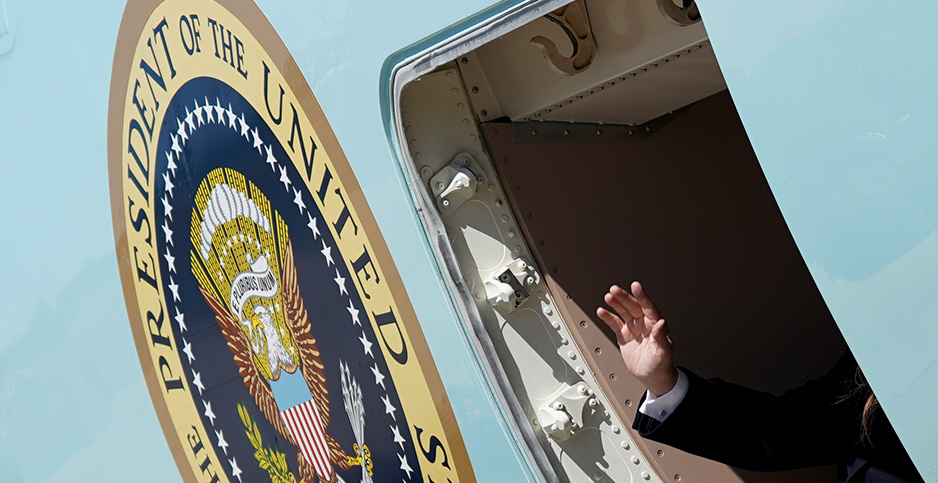 Stunned foreign trade partners signaled their intent to fight back against President Trump’s controversial decision to slap new tariffs on imported steel and aluminum, but they probably won’t use a carbon levy to do it.

Experts say that while the European Union and other governments may eventually adopt trade policies aimed at punishing the United States for not contributing to the global project of avoiding harmful warming, now is not the time.

"The way to win a trade war is to aim for the heart," said Kevin Book, managing director with ClearView Energy Partners LLC.

Foreign governments reeling from Trump’s announcement Thursday that he would apply a 25 percent tariff on steel imports and a 10 percent tariff on aluminum are promising to retaliate on U.S. exporters. Yet carbon-intensive products like steel and aluminum aren’t good candidates for tariffs on the United States because the country imports more than it exports.

"Punishment is more effective if it looks like it’s going to work," observed Book.

That’s not to say carbon tariffs aren’t being discussed, especially in the European Union. Members of the European Parliament in Brussels have floated the idea periodically since the European Union launched its Emissions Trading System more than a decade ago. Those conversations are carried on behind closed doors and seem to have intensified in the months since Trump announced a departure from the Paris Agreement. But there’s little evidence that the idea is gaining traction.

"I haven’t seen any political group within the European Parliament or any of the committees really proposing this as a real option," said Wendel Trio, director of Climate Action Network Europe. "So I think we’re still in the early stages of that debate."

The European Commission is expected to unveil a long-term road map for E.U. climate and energy policies later this spring that will include a section on trade, Trio said. Border adjustments could be addressed there.

The strongest proponent of such measures is French President Emmanuel Macron, who used a December summit in Paris marking the deal’s second anniversary to call for taxing the carbon content of imports at the E.U. border. Macron is also promoting the adoption of an E.U.-wide minimum carbon price.

David Livingston, deputy director of climate and advanced energy at the Atlantic Council, said European carbon tariffs could find firmer footing with Trump’s trade announcement. It builds on existing acrimony generated by the U.S. decision on the Paris Agreement.

"Does that raise the risk of the E.U. eventually using a carbon border adjustment against the United States? Absolutely," he said. "Is it a short-term response in the E.U. toolkit? Very unlikely."

Doing so now could bring the wrath of the World Trade Organization down on the European Union, he said. The European Union’s carbon trading system allocates 40 percent of emissions allowances for free to Europe’s emitting industries — a giveaway that the WTO would likely deem an unfair subsidy if paired with border adjustment measures on imports.

But the union is moving toward an all-auction Emissions Trading System. And as free allowances are phased out, the likelihood of an E.U. carbon tariff increases, said Livingston.

"Of course, it would not be just about the U.S.," said Trio. "If there were a border carbon tax, it would affect many countries that don’t necessarily have very specific policies in place that put a price on carbon. So it would have repercussions for many other countries, and I don’t think there’s currently a majority in the E.U. that would want to go that way."

Experts say one way to target just the United States is to make membership in the Paris Agreement a criterion, not carbon policies. Here, again, the timing isn’t right — the United States will be a party to Paris at least until November 2020, despite Trump’s decision.

If the United States leaves the Paris accord, it will be the only nation in the world outside the deal except North Korea, and any trade penalty that excludes non-parties will target the United States with surgical precision.

The European Union and other governments are already forming tighter bonds on the basis of Paris involvement. China and Canada expanded their bilateral cooperation on climate change in December. And the European Union reaffirmed the Paris pact in recent trade deals with Canada and Japan, and it plans to do so with Mexico and South American countries soon.

Last Monday, the European Union officially adopted a new directive ruling out any new trade agreements with countries that are not Paris members.

This took renegotiation of E.U. trade agreements with the United States off the table, and Trump’s tariff announcement made those negotiations more remote. Even Canada has faced pressure from Canadian trade groups to walk away from negotiations around the North American Free Trade Agreement, based on Trump’s tariffs threat.

"I think it’s pretty clear that other countries are pretty upset about it, and they’re contemplating a response," said trade expert Timothy Regan of Corning Inc., after Trump tweeted Friday that "Trade wars are good, and easy to win."

Countries could retaliate by hitting U.S. imports in sectors like agriculture, which would put pressure on members of Congress to intervene on behalf of home-state businesses. But those measures might run afoul of the WTO, which has already expressed concern about Trump’s tariffs.

To avoid triggering the WTO, Regan said, national governments might scale back their purchase of U.S. goods, invest less in U.S. companies or shun U.S. services.

"There are a lot of things countries could do if they choose to do it," he said.

Jean-Claude Juncker, president of the European Commission, responded to Trump’s proposal over the weekend by suggesting E.U. tariffs on Harley-Davidson motorcycles, blue jeans and bourbon.

His selections seem designed to get the attention of congressional leaders from the states where those products are made: House Speaker Paul Ryan (R-Wis.), Senate Majority Leader Mitch McConnell (R-Ky.) and House Democratic Leader Nancy Pelosi of California, where Levis Strauss & Co. is based.