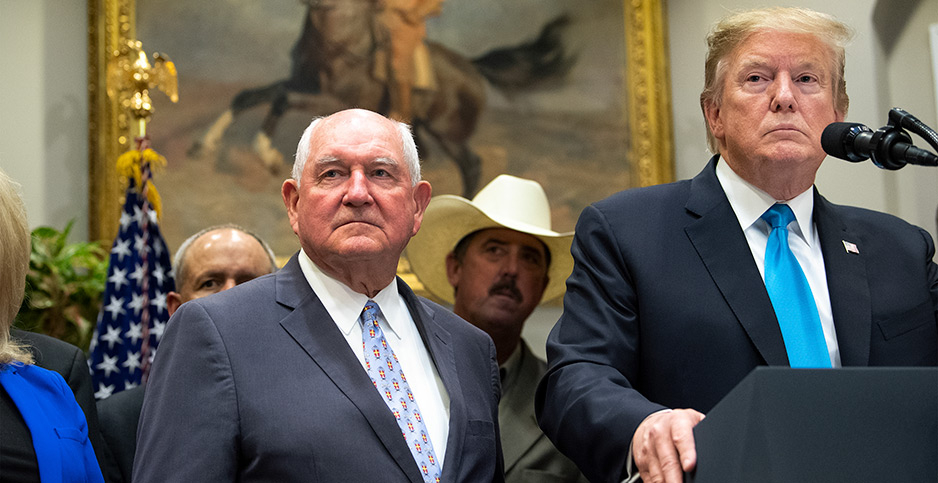 Agriculture Secretary Sonny Perdue stands alongside President Trump last year at the White House. During his time as Georgia governor, Perdue signed into law a measure that required new buildings to have more efficient toilets, shower heads and faucets — an approach Trump has criticized. Sipa USA/Newscom

If President Trump wants to understand the risk of rolling back water efficiency standards that have been in place for almost 30 years, he can turn to a member of his own Cabinet.

Agriculture Secretary Sonny Perdue has signed off on regulations that treat water-efficient toilets and shower heads as effective tools to save Americans from droughts and other risks.

In 2007, when Perdue was Georgia’s governor, the state was in the grips of a historic and extreme drought, and Atlanta was months away from losing its primary water source (Greenwire, Oct. 17, 2007).

The Perdue administration scrambled for months to conserve water as the exceptional drought — the National Weather Service’s worst drought category — depleted water supplies. At one point, Perdue even held a prayer vigil at the Georgia State Capitol to ask God for more rain.

The drought taught Perdue about the need to include water conservation in state planning. In 2010, to protect the state from future droughts, Perdue signed the Georgia Water Stewardship Act, which required new buildings to have more efficient toilets, shower heads and faucets. Industrial buildings were required to have water-efficient cooling towers.

"We’re all — having gone through a transformation over the last 20 years to think that water was infinite and that we’d never run out — understanding the criticality of how important it is to preserve," he said at the time.

Trump, on the other hand, has repeatedly claimed he will make showers and faucets great again by removing water flow restrictions. Since last month, Trump has been telling crowds at his rallies that his administration will review standards on water conservation that have been in place for almost 30 years (Climatewire, Jan. 24).

Even if Trump tried to roll back federal water efficiency standards, which would require action by Congress, Georgia is one of six states with more stringent water efficiency standards. The other states — California, Texas, Nevada, Colorado and New York — have enacted their own standards and collectively constitute a significant enough share of the market that manufacturers would be unlikely to roll back.

The states, which include those dominated by Republicans as well as those controlled by Democrats, have proved that water efficiency standards are an effective way to manage resources, said Mary Ann Dickinson, president of the nonprofit Alliance for Water Efficiency.

"It’s not a political issue. It is an issue driven by real resource need in this country, and all this discussion about how showers need to flow with more water need to take into account all the reasons the efficiency standards were put in place," Dickinson said. "A lot of our water supplies are becoming very strained, very limited and not necessarily going to be available to accommodate future growth."

In Georgia, the push to conserve water was borne out of economic necessity and was pushed by Republican state lawmakers, said Rob McDowell, who worked on water management issues in the Perdue administration at the Georgia Environmental Protection Division and helped state lawmakers advance the bill.

McDowell said the reason the push for water conservation regulations was successful in a state where many conservative lawmakers are resistant to such policies was because people had experienced the issue at hand. Repeated experiences of desperation motivated many people, he said.

"The experience of repeated watering restrictions, the 2007 droughts and repeated low levels in reservoirs, Athens coming within 30 days of losing their water supply, people really responded to that, and it was probably that perfect window of opportunity where there was that convergence of events that allowed policy to go through," said McDowell, who now teaches at Georgia State University.

Like Trump, Perdue rejects climate science. In June, he told CNN that "we don’t know" the causes of climate change and then blamed it on changing weather patterns. Still, although Perdue didn’t factor in climate change to his water efficiency policy, he did inadvertently do a more effective job planning for it, McDowell said.

Scientists say Georgia and the rest of the Southeast will see increased drought, as well as increased extreme rainfall events, as a result of climate change. That will transform ecosystems and put further stress on infrastructure and water supplies. The water conservation restrictions will help the state prepare for that.

"In combination, future increases in the frequency and severity of both extreme drought and extreme rainfall are expected to transform many ecosystems in the Southeast region," the Fourth National Climate Assessment found. "Natural systems in the region will have to become resistant and resilient to both too little water and too much water."

USDA responded with comment after E&E News published this story. An agency official said in a statement that "as governor, Secretary Perdue implemented water efficiency restrictions for the good of the state of Georgia during an extreme drought. President Trump recognizes that the needs of each state are vastly different, which is why he is reducing federal one size fits all regulations to allow state leadership to determine their own regulatory needs and environmental standards."

Even if Perdue doesn’t speak out and show Trump the value of water efficiency protections, trying to change federal standards will likely meet pushback from GOP state lawmakers in Georgia, McDowell said. That’s if they don’t fall prey to partisanship that advances bad policies at the expense of good ones out of political spite.

"He’s not going to get much support from the politicians in Georgia unless the us-versus-them tribalism overtakes the rationality of conserving water," McDowell said. "If Trump succeeds in getting conservation things rolled back, he’s going to get a big mess from Georgia."