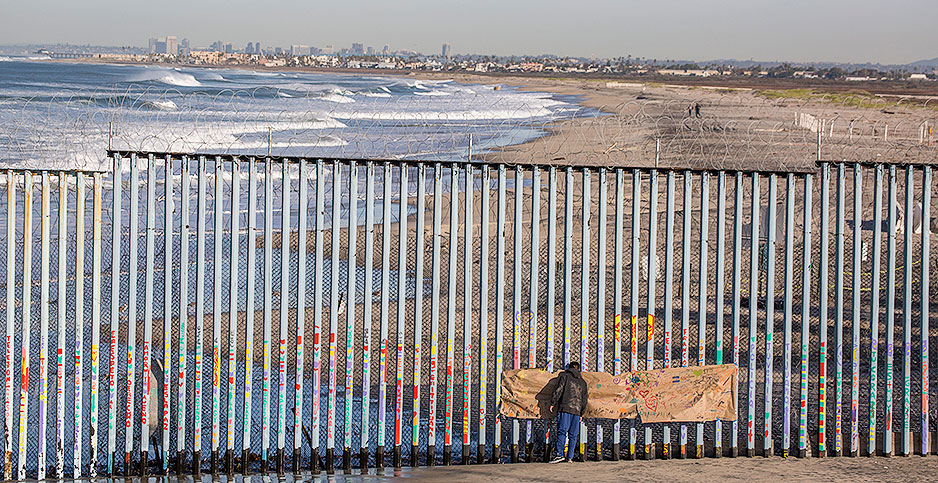 A man in Tijuana, Mexico, looked through the border fence toward the United States earlier this month. Omar Martinez/dpa/picture-alliance/Newscom

President Trump likely would scoff at any suggestion that his desire for a wall on the U.S.-Mexico border has anything to do with climate change.

But researchers in fields from geography to behavioral science increasingly have drawn a connection between global warming and mass migration — and a related rise in anti-immigrant nationalism in both Europe and the United States.

So Trump wasn’t wrong when he recently highlighted the fact that Europe has built a rash of border barriers in recent years.

Where he is wrong, say critics, is in the administration’s approach to the dual challenges of immigration and climate change.

Not only is a wall an ineffective deterrent to illegal entry, they argue, but Trump’s rollback of carbon-fighting regulations could exacerbate mass migration in the Western Hemisphere and the world.

"Basically it’s a Band-Aid on a cancer, because it’s really not solving the root problem," said Elisabeth Vallet, a geographer from the University of Quebec, Montreal.

Vallet’s research formed the basis of Trump’s claim on Twitter last Wednesday that there are now "77 major or significant Walls built around the world" for border security.

In an interview, Vallet clarified that the figure includes walls slated for construction. And she said she disagrees with Trump’s assertion in the same tweet that that European border walls have been recognized as being "close to 100 percent successful."

Rather, she said, barriers simply have encouraged migrants to take greater risks while providing political cover to lawmakers in countries where populations feel threatened by immigration.

"Border walls are a lot about border theater," Vallet said. "If you’re desperate enough to cross the Mediterranean with your kids, that means a wall won’t prevent you from going across."

European countries have erected roughly 600 miles’ worth of border barriers over the last three decades — "the equivalent of more than six times the total length of the Berlin Walls … to prevent displaced people migrating into Europe," according to an investigation published last fall by the Transnational Institute, a social justice research group based out of the Netherlands.

Vallet divides that building spree into two eras: one in the late 1990s in response to increased globalism, and another over the last half-decade as Europe experienced a greater influx of immigration from the Middle East and North Africa.

Most of the barriers were built in the second wave.

Bulgaria and Hungary, part of the "Balkan route" into Europe for refugees fleeing Iraq, Syria and Afghanistan, have constructed new barbed-wire fences since 2014. Norway, Latvia and Estonia also have put up new barriers this decade.

In addition, the "United Kingdom put pressure on France to build walls around the port of Calais on the Eurotunnel route connecting France and the United Kingdom," wrote the authors of the Transnational Institute report.

The overall result hasn’t been a stop to migration, the report authors said, but it has made it more difficult. And the walls have contributed to a related rise in nationalist politics.

"The analysed data shows a worrying rise in racist opinions in recent years, which has increased the percentage of votes to European parties with a xenophobic ideology, and facilitated their growing political influence," they added.

Conflicts in Africa and the Middle East have spurred much of the recent migration to Europe. Climate change is increasingly recognized as a factor.

In West Africa and the Sahel, for example, soaring temperatures and changing rainfall patterns have strained the ability of subsistence herders, farmers and fishermen to eke out a living, causing a wave of internal migration over the last decade as rural populations abandon their homes to compete for resources elsewhere or flee to urban slums.

The U.N. Security Council acknowledged in a statement last year that these hardships have helped terrorist groups like Boko Haram gain a foothold in the region.

Links between terrorism and climate change aren’t always clear, but the council, which has been criticized for being slow to recognize the security implications of warming, stated that "the adverse effects of climate change and ecological changes" are driving violent extremism in West African and the Sahel countries.

Climate change has also been linked to Syria’s bloody civil war, which will soon enter its ninth year. Between 2006 and 2011, rural regions of the country experienced devastating droughts, pushing farmers off their land and into Syrian cities already crowded with war refugees from Iraq. Existing political tensions and discontent over higher food prices from the drought helped sow the seeds of conflict.

There’s little evidence that environmental pressures on the Middle East or Africa will ease anytime soon. The U.N. Intergovernmental Panel on Climate Change warns that those regions will experience some of the worst water shortages anywhere as the century progresses.

Africa alone is projected to have 250 million people living in regions with food and water insecurity by the end of the century. Three-quarters of the Sahel’s arable land is expected to be lost in the same period.

"These are not the abstract complaints of climate scientists, but represent a profoundly disruptive trend in a region dependent on agriculture and other rural livelihoods such as herding and fishing, and lacking quality infrastructure and integrated markets to relieve localized disruptions," wrote Michael Werz and Max Hoffman of the left-leaning Center for American Progress in a 2016 paper. "When faced with deteriorating conditions, humans have long turned to migration as a basic adaptive mechanism."

Trump has described immigration across the U.S.-Mexico border as an unprecedented emergency and has made funding for a border wall a condition of reopening the federal government.

But his actions on climate could spur even more migration across the southern border.

In his first years in office, Trump has relaxed controls on emissions from both cars and power plants, announced that the United States would withdraw from the landmark Paris climate accord, and reneged on President Obama’s commitment to provide $3 billion for a U.N. adaptation and mitigation fund for poor countries threatened by climate change.

Trump has also retreated from plans by the Obama administration to examine the effect of climate change on mass migration, according to one government watchdog.

"For example, a fiscal year 2016 presidential memorandum — rescinded in 2017 — required agencies to develop implementation plans to identify the potential impact of climate change on human mobility, among other things," researchers with the Government Accountability Office, an investigative arm of Congress, wrote this month.

Research shows that’s likely to increase the flow of climate migrants — not slow them down.

Subsistence farmers in Honduras, Nicaragua and El Salvador are noticing many of the same climatic changes that are pushing smallholder farmers off their land in Mali, South Sudan and Chad. Northern Central America has become known as the "dry corridor"; while it has always been arid, conditions there have worsened in recent years.

Mexico’s increasingly unpredictable weather has coincided with the removal of protective federal trade and farming policies and increased competition in the wake of the North American Free Trade Agreement. Liberalization has brought foreign investment and new industries, but it has also exacerbated regional and rural-urban inequality, with illiterate populations in the countryside receiving little benefit.

As smallholder farms became more untenable, families have tried to diversify by sending one or more members north in search of work to supplement the family income. The need is greatest when the crops fail, particularly after a drought.

"You can think of all of this as an adaptation to climate change," said Lori Hunter, director of the Institute of Behavioral Science at the University of Colorado, Boulder, in a recent interview.

In 2013, Hunter and two CU Boulder colleagues used data from the Mexican Migration Project, a joint initiative of Princeton University and the University of Guadalajara, to show that rural regions of Mexico that have historically sent the most immigrants to the United States sent fewer after a year of ample rainfall.

Notably, fewer people also left in drought years, but immigration pushed sharply up in the years after a drought, suggesting that families had been saving to pay for the journey.

A 2015 study by Hunter and CU Boulder colleague Raphael Nawrotzki found that after weather events linked to climate change, Mexican immigrants were more likely to be undocumented.

Hunter and others stress that the causes of migration from and through Mexico are complex, and include both "push" factors like instability, violence and poverty — all of which may be worsened by water shortages — and "pull" factors, like a strong U.S. economy or, ironically, the perception in countries of origin that access to the United States will become more difficult in the future.

Trying to quantify the impact climate change has on migration is difficult, as there are a wide range of variables involved. But one team of researchers noticed a link when they looked at the mass exodus of people from Mexico to the United States from 1995 to 2005.

Mexico was dealing with a drought around that time, especially in the northern part of the country, and the investigators found a connection between migration rates and farm production.

"Using state-level data from Mexico, we find a significant effect of climate-driven changes in crop yields on the rate of emigration to the United States," wrote the authors in a 2010 paper published in the Proceedings of the National Academy of Sciences.

Put another way, they estimated a 10 percent decline in crop yields would prompt an additional 2 percent of the population to emigrate.

The team theorized that it could foretell a future of mass migration from Mexico.

"Depending on the warming scenarios used and adaptation levels assumed, with other factors held constant, by approximately the year 2080, climate change is estimated to induce 1.4 [million] to 6.7 million adult Mexicans … to emigrate as a result of declines in agricultural productivity alone," the researchers wrote.