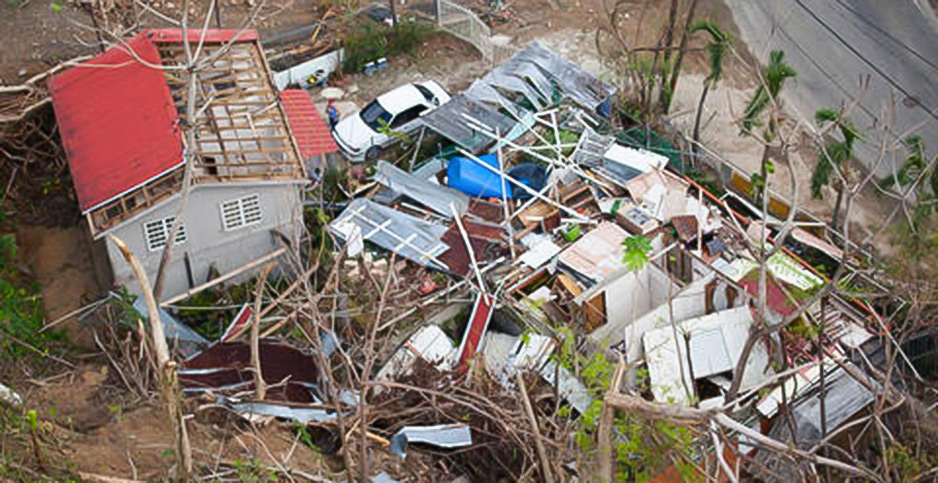 Destruction from Hurricane Maria in Puerto Rico. National Institute of Standards and Technology/U.S. Department of Commerce

President Trump’s rejection of death estimates from a devastating hurricane last year seems to dismiss dangerous health threats from natural disasters that can kill victims months after a storm disappears.

As Hurricane Florence roared off the U.S. coast yesterday, Trump fed conspiracy theories about Hurricane Maria’s impact on Puerto Rico 12 months ago by writing on Twitter that just six to 18 people died in its aftermath. The figure is closer to 3,000, according to an estimate released by researchers last month.

A separate study from 2016 by the National Hurricane Center and Federal Emergency Management Agency examined indirect deaths caused by Atlantic hurricanes in the United States, drawing on data from 1963 through 2014. It found that about 44 percent of all hurricane-related deaths were indirect.

They weren’t caused by violent wind or storm surge, but these deaths were still related to the hurricane.

Power failure is a major cause of death in the aftermath of hurricanes, according to the report. That can lead to loss of air conditioning, which can cause heat-related illness and death. It can cause lifesaving medical machines to fail in homes and hospitals. It can cause house fires when people use open flames for light and cooking. It can lead to accidental carbon monoxide poisoning while using generators.

Illness is another major risk, especially cardiovascular failure. Although it’s often difficult to attribute a heart attack to a specific cause, the researchers suggest that hurricanes may cause spikes in cardiovascular incidents through stress or exposure to the elements.

Car accidents also make up a substantial portion of indirect deaths. Hurricane evacuations can increase the number of crashes, the report notes. And accidents may be more likely because of slippery streets, the loss of traffic lights, or fallen trees and other debris on the roads.

In a series of tweets yesterday morning, Trump wrote that "3000 people did not die in the two hurricanes that hit Puerto Rico." He was presumably referring to Hurricane Irma, which clipped the island on Sept. 7, 2017, and the far more damaging Hurricane Maria. It slammed into Puerto Rico on Sept. 20.

"When I left the Island, AFTER the storm had hit, they had anywhere from 6 to 18 deaths," Trump tweeted. "As time went by it did not go up by much. Then, a long time later, they started to report really large numbers, like 3000…"

Trump also suggested that the high death rate was "done by the Democrats in order to make me look as bad as possible when I was successfully raising Billions of Dollars to help rebuild Puerto Rico." He called it "bad politics."

The estimate of 3,000 deaths in Puerto Rico comes from a study published last month by researchers with George Washington University. It estimated that 2,975 excess deaths occurred after Hurricane Maria between September 2017 and February 2018.

The study was requested by Puerto Rican Gov. Ricardo Rosselló, and it’s now cited as the official death toll for Hurricane Maria.

Trump is technically correct that nearly 3,000 people did not die during the hurricane itself. Early government reports varied in the weeks following Maria, but direct hurricane deaths — people who died in floods or in wind-related incidents, for instance — likely ranged from one to several dozen.

The GWU report demonstrates that almost 3,000 more people died in the months following the hurricane than would be expected if Maria had never occurred — indicating that those deaths were still linked, in some way, to the effects of the storm.

Many have criticized the Trump administration’s response to the disaster in Puerto Rico and suggested that inadequate emergency aid may be related to the hurricane’s high death toll.

The GWU report doesn’t delve into the exact cause behind all those mortalities — a point that Trump also seems to have seized on. In a second tweet, he suggested that "if a person died for any reason, like old age, just add them onto the list."

The purpose of the study was to make the distinction between the number of deaths actually occurring after Hurricane Maria and the deaths that should have occurred under typical circumstances. So it’s reasonable to assume that most of those mortalities are somehow related to the storm — in other words, that they would not have occurred if Maria hadn’t happened.

GWU’s Milken Institute School of Public Health issued a statement yesterday saying the researchers "stand by the science" in their study.

"Our results show that Hurricane Maria was a very deadly storm, one that affected the entire island but hit the poor and the elderly the hardest," the statement reads. "We are confident that the number — 2,975 — is the most accurate and unbiased estimate of excess mortality to date."

But it doesn’t mean that those nearly 3,000 deaths are not hurricane-related. On the contrary, the study strongly indicates that many of those lives may not have been lost had the hurricane never occurred.