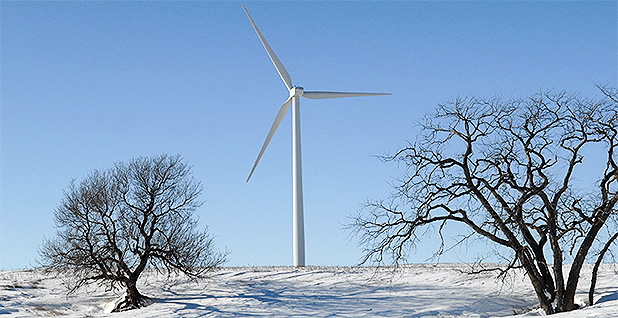 As residents of the Twin Cities awoke on Jan. 29, the first of three straight days of subzero temperatures, about half of the region’s electricity was coming from wind farms dotting the Upper Midwest.

Wind energy across the Midcontinent Independent System Operator’s northern region, stretching from Minnesota to Iowa, peaked that morning between 9 and 10 a.m. at 11,445 megawatts. Wind farms were churning out about half of the area’s total electric output, according to the grid operator’s hourly data.

At the time, it was minus 8 degrees Fahrenheit at Minneapolis-St. Paul International Airport. Blustering winds made it feel like minus 19 F.

But grid operators would watch as electricity from wind steadily tailed off during the next day and a half.

By the evening of Jan. 30, there was less than 550 MW on the MISO North grid, supplying just 2.5 percent of the region’s power. The temperature, which had bottomed out an hour earlier, had fallen to minus 21 F with a minus 31 F wind chill.

That dip in wind output during last month’s deep freeze is now fueling debate about the nation’s embrace of renewable energy. The polar vortex arrived as calls grew on the left for a "Green New Deal" to transition to renewables and tackle the threat of climate change, all while various state-level proposals to increase renewable energy penetration circulated across the country.

It was also fresh ammunition for a fossil industry and other critics of renewable energy mandates that have long sowed doubts about the ability to maintain reliability on a grid growing increasingly dependent on intermittent energy sources.

But what exactly happened across the Midwestern footprint?

Part of the reason for a drop in wind output was the normal daily variation in generation. In fact, the grid operator expected less wind energy to be available throughout Jan. 30, according to MISO’s day-ahead forecast.

Other turbines across the Upper Midwest shut down due to plunging temperatures.

Output from wind farms — a technology dubbed as the new baseload energy in the Upper Midwest — fell off even faster than anticipated starting the night before as temperatures fell below minus 20 F, the cutoff point below which turbines automatically quit operating.

A MISO presentation released ahead of the committee meeting today shows that when the grid operator declared a "maximum generation event" just before 3 a.m. on Jan. 30, only about half of the almost 14,000-MW forecast of wind generation to be available was actually producing energy.

Brian Draxten, manager of resource planning for Otter Tail Power Co., said wind turbines across North Dakota shut down because of the extreme temperatures. In fact, he said the wind farms went from a power producer to a 2-MW load on its system because they required heat to avoid being damaged.

Xcel Energy Inc., which likewise gets nearly 20 percent of its energy from wind, said wind farms in Minnesota and North Dakota automatically shut down when the temperature reached minus 20 F.

Utility spokesman Randy Fordice said the timing of the shutdowns varied, but they generally shut down during overnight hours on Jan. 29 and 30. Some did operate during the day of Jan. 30, and normal operations resumed Jan. 31.

A spokesman for Iowa’s MidAmerican Energy Co. also said that extreme temperatures affected wind output, though the utility wasn’t specific about the temperature threshold or for how long wind output was curtailed.

Jakob Skjoeth, chief engineer at Siemens Gamesa Renewable Energy SA, the world’s second-largest turbine manufacturer, said the company has several turbine configurations. But even equipped with so-called cold weather packages, turbines can operate up to minus 22 F (minus 30 degrees Celsius).

Extreme cold takes a toll on various parts of a turbine, from electrical cabinets to the gearbox, the generator, lubricants and steel components, which can become brittle if the temperature goes low enough, Skjoeth said.

While turbines can be equipped with de-icing systems to help operate through snow and ice, that isn’t the problem seen in extreme cold, such as what the Upper Midwest saw during the polar vortex, he said.

Meanwhile, Skjoeth said there’s been little focus in the industry on developing turbines to operate below minus 20 F because the economics of producing energy in such extreme conditions wouldn’t justify the additional cost.

"Historically, the really cold weather comes with a decline in wind speeds," he said. "When you get that low, you don’t get that much wind, normally."

Even in Minnesota and the Dakotas, the kind of low temperatures recorded during the last three days of January are rare. But the polar vortex is still a key data point in the debate over the region’s energy transition.

Minnesota, in fact, is among the states where clean energy advocates are pushing a bill to establish an 80 percent renewable energy standard by 2035 with a goal of 100 percent clean energy by midcentury (Energywire, Feb. 6).

Within days of the polar vortex, a lobbyist for Dairyland Power Cooperative, a generation and transmission cooperative, told a Minnesota legislative committee hearing on the bill that wind energy didn’t show up when it was needed.

The lights stayed on "only because of fossil fuel power plants that could be called upon and dispatched," he said.

But MISO’s data show that coal- and natural-gas-fired power plants across the region failed in the extreme cold too. In fact, the grid operator report shows 15,000 MW of coal- and gas-fired generation experienced forced outages on Jan. 30 and Jan. 31.

MISO officials weren’t available to discuss the grid’s performance during the polar vortex. But the grid operator is set to cover the topic at its Reliability Subcommittee meeting this afternoon.

The MISO report is consistent with similar data from PJM Interconnection LLC, which likewise showed coal and gas plants dominated the forced outages in the Mid-Atlantic region.

With or without legislation to speed up the energy transition in Minnesota and elsewhere, states will only continue to become more reliant on renewable energy, especially wind and solar, to keep the lights on.

There are currently 163 wind projects in MISO’s interconnection queue, representing more than 31,000 MW of capacity.

Otter Tail, based in Ferguson Falls, Minn., is among the Upper Midwest utilities adding more wind to its portfolio — a 150-MW wind farm to be completed next year that will help replace a Minnesota coal plant. The wind project will be complemented by a 248-MW gas peaking plant being constructed in neighboring South Dakota.

Draxten, the utility’s resource planner, said the wind is being counted on for energy while the gas turbine provides needed capacity. "We look at that combination as the new baseload," he said.

"Can we have a higher penetration of renewables? Absolutely," Draxten said. "The question is how far can we go and how fast can we go? I just always think we are always going to need some type of thermal generation."

Michael Goggin, a vice president of Grid Strategies LLC, a clean energy consulting firm, said the grid can accommodate significantly more wind and solar as long as there’s the ability to move power between different regions via high-voltage transmission.

"What really matters is the eastern interconnect," he said. "A larger grid does a huge amount to help with this type of event."

In a blog post for the American Wind Energy Association, Goggin touted the value of transmission during the polar vortex as PJM Interconnection exported more than 5,000 MW of power to MISO, a reversal of the typical west-to-east power flow.

In fact, MISO North data show that while coal and natural gas power plants in the region increased their output as wind energy tailed off, power imports played a starring role in filling the void.

Clean energy advocates believe the intermittence of renewables doesn’t become an issue for grid reliability until penetration reaches about 75 percent.

Wade Schauer, research director for Americas power and renewables research at Wood Mackenzie, noted that it gets "exponentially" harder economically to justify renewable penetration beyond 50 percent, including hydroelectricity, because of an increase in curtailments during periods of overproduction and because of a need for dispatchable power.

"You can keep building more, but you still need more backup generation to be there on days like these during the polar vortex," he said.

MISO, too, published a renewable integration impact assessment last fall that said going beyond 40 percent renewable penetration will be increasingly challenging and could require additional transmission.

Until then, MISO has identified steps it can take, including maintaining data on the temperature cutoff thresholds for wind turbines, so it won’t be caught off-guard by the loss of wind generation on the grid during extreme conditions.