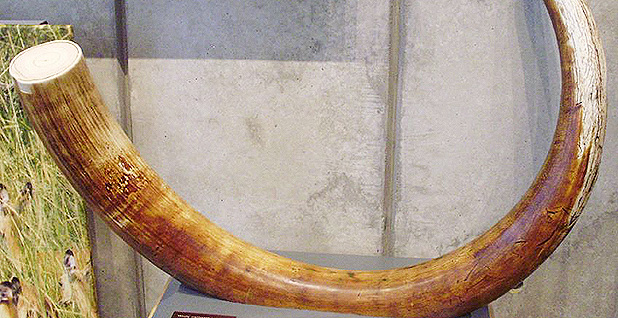 The theft of a mammoth tusk prompted a rare prosecution under the Paleontological Resources Preservation Act. California Academy of the Sciences/Wikimedia Commons

Before he ever beheld the mammoth tusk that proved his latest undoing, Gary Lynn Boyd had amassed eight criminal convictions and the nickname "Booster Gary."

"The defendant is so well-known as a booster, in fact, that other Facebook users contact him to solicit his services as a thief," prosecutors declared in a May 22 memo.

Now the former cannery worker is about to be sentenced for his most distinctive crime. It’s a tusk theft that summoned Bureau of Land Management law enforcement officers, armed with a usually obscure but once controversial law written to protect fossils on federal lands.

"Thefts of this nature have been prolific on public lands in the Lower 48 for some time, but it is our belief that this is one of the first few successful prosecutions under the Paleontological Resources [Preservation] Act since its passage in 2009," Ted Murphy, BLM’s acting state director, wrote as part of a sentencing recommendation memo.

Boyd is scheduled for sentencing Wednesday in federal court in Anchorage, after pleading guilty to stealing the 10,000-year-old mammoth tusk from BLM’s Campbell Creek Science Center.

The prosecutors recommend a sentence of 41 months. Boyd’s attorney, federal public defender Rich Curtner, in his own sentencing memo called the theft a "hare-brained scheme" and the result of an "impulsive and ill-advised plan." He is asking for a 24-month sentence.

Neither man, despite their repeated run-ins over the years with various courts and cops, had much of a prior clue about the fossil-protecting law they’ll be doing time for.

Prior to the Paleontological Resources Preservation Act, fossils on federal lands were haphazardly protected by the Antiquities Act of 1906. Several other laws permitted the imposition of modest fines.

First introduced in 2001, following completion of an influential Interior Department study that urged stiffer penalties because "hundreds of fossils are stolen from federal lands every year," the Paleontological Resources Preservation Act nonetheless had to overcome early hurdles.

"This piece of legislation will make a criminal out of every tourist traveling to the western United States who makes the mistake of picking up a rock and throwing it in their trunk," then-Rep. John Culberson (R-Texas) fumed during 2009 House debate. "Grandma and grandpa are going to be thrown in jail."

The then-chairman of the House Natural Resources Committee, West Virginia Democratic Rep. Nick Rahall, countered that it was "very clear that it is not the intent of the sponsors of this legislation to see innocent civilians collecting fossils on public lands go to jail."

The accompanying BLM rules allow "casual collecting … of a reasonable amount of common invertebrate or plant paleontological resources for non-commercial personal use," which some fossil collectors maintain is still too restrictive.

In the decade since the law was enacted, successful prosecutions under the law have been quite rare.

In 2014, a Utah construction company co-owner named Jared Ehlers chanced upon a 150-pound sandstone slab containing a fossil of a three-toed dinosaur track near a jeep trail at the Sand Flats Recreation Area. He took it; later, he dumped it into the Colorado River.

Ehlers pleaded guilty and was sentenced to one year of probation, including six months of home detention, and ordered to pay $15,000 in restitution (Greenwire, Oct. 21, 2014).

The Ehlers case stood alone as a successful, full-bore PRPA prosecution — charges involving dinosaur tracks and another Utah man were brought but later withdrawn — until Boyd and Elze encountered the mammoth tusk.

The tusk had been in BLM possession since the mid-1980s, after being recovered from individuals who removed it from federal land near the Colville River in northern Alaska. At the science center, it was a popular exhibit. Intact, it was valued at between $7,000 and $9,000.

Both men, meanwhile, had troubled lives that included several stretches in prison. Elze did time for attempted murder, while seven of Boyd’s eight prior convictions were for theft.

"At the age of 17 he witnessed his father, who was suffering from schizophrenia, shoot himself in the head," Boyd’s attorney wrote, adding that "as his mother, a school teacher … has stated, Gary ‘has a kind heart, is respectful and helpful,’ and is a ‘good worker, when he is not using drugs.’"

Prosecutors said Elze and Boyd visited the science center on March 7, 2018, asking staff about the weight and authenticity of the tusk. Their questions and demeanor alarmed the staff of the center, which sees about 30,000 visitors annually.

The two men returned the next night, when prosecutors say Boyd shattered a window with a rock and together the two men hauled off the 100-pound tusk, eventually taking it to Elze’s trailer. Elze, who had learned about ivory during a prior prison stint, cut it up.

The two men, though, did not cover their tracks well.

The science center’s video cameras caught them at their March 7 visit and, the next night, carrying the tusk across the parking lot. Snow tracks matched the treads of their shoes. Cellphone data placed Elze at the scene.

"So what we got going right now is a really strong case against both you and Gary," a BLM special agent told Elze in a tape-recorded and transcribed jailhouse interview.

Nonetheless, Elze was recorded a month later telling his girlfriend "it ain’t my footprints" and suggesting to her that she show officers her boots instead to throw the investigators off the trail.

"That’s gonna cause me trouble," the girlfriend objected, "and I don’t need trouble."