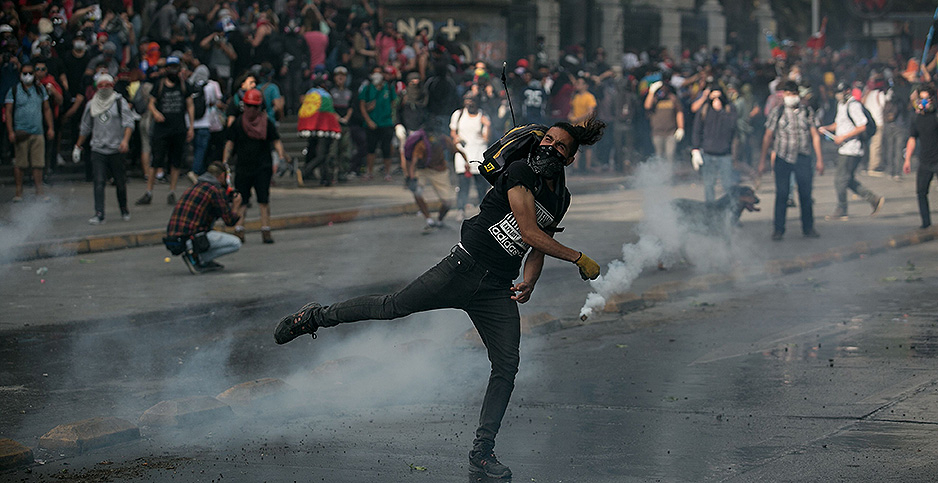 Chile withdrew from hosting the next round of U.N. climate talks as massive and violent protests continue across the nation. A protester throws a tear gas canister at police in Santiago yesterday. Jose Miguel Rojas/SIPA/Newscom

Chilean President Sebastián Piñera announced this morning that Chile would not host the U.N. climate talks that were set to begin in Santiago on Dec. 2.

U.N. climate chief Patricia Espinosa released a statement this morning stating, "I was informed of the decision by the government of Chile not to host COP25 in view of the difficult situation that the country is undergoing." She added, "We are currently exploring alternative hosting options."

In remarks from the presidential palace, Piñera said 12 days of civil unrest has forced the country to cancel the climate conference and a separate high-level trade summit that both President Trump and Chinese President Xi Jinping had been scheduled to attend.

"This has been a very difficult decision, a decision that causes us a lot of pain," said Piñera.

The climate conference had been set to be held Dec. 2-13. The trade conference was scheduled for November.

The news that Chile would not host the COP — or Conference of the Parties to the U.N. Framework Convention on Climate Change — came as a surprise to U.S. environmental advocates, who said the Chilean COP presidency had signaled optimism earlier this week that plans for the conference would go forward despite massive protests that have rocked the country since Oct. 18. The unrest was sparked by student protests over a 4-cent increase to Santiago’s metro rail fares and has since spread to other parts of the country. Millions have demonstrated against the country’s high levels of economic inequality, and clashes with federal police have left at least 20 dead.

It’s unclear when and where the conference will be held. "Next steps are being defined as I write this," a UNFCCC official told E&E News in an email.

Climate advocates said they had been told that the conference had been "suspended" rather than "canceled," which might signal that Santiago would still host the gathering but that it would be postponed until early next year. But the capital city’s mass transit system has been badly damaged by the protests, and U.N. conferences typically rely on a host city’s transportation infrastructure to bring delegates to and from the conference venue.

Espinosa’s statement suggests that the United Nations is looking to hold the conference outside of Chile, though Chilean Environment Minister Carolina Schmidt would remain president of the COP.

The most likely alternative venue would be Bonn, Germany, where the secretariat of the UNFCCC is based.

Bonn most recently hosted the 2017 year-end talks despite Fiji holding the presidency.

Herz said another possibility is Costa Rica, which hosted a preliminary gathering of negotiators.

But the last-minute venue switch will likely mean fewer participants. Santiago was already expected to be a relatively small COP. So far, the United Nations has issued 5,000 credentials to participants, and the change is likely to further limit attendance.