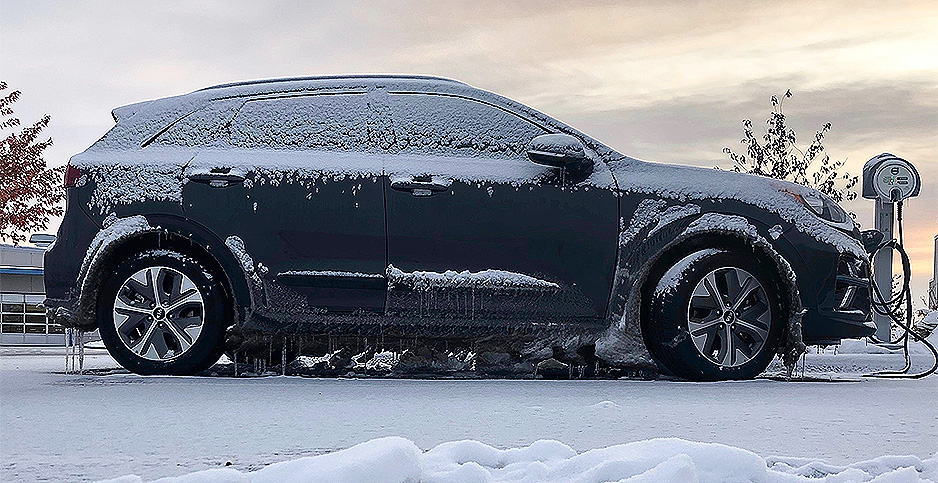 An electric vehicle parked and charging at a Volvo dealership in Billings, Mont. David Ferris/E&E News

The head of Volkswagen Group of America Inc. recently stood before his dealers and told them he would cover half the costs of getting their facilities ready for electric cars, such as building charging stations.

That declaration stood out for its generosity.

Most automakers, including General Motors Co. and Ford Motor Co., claim to be invested in an electric future but are leaving it to dealers to pay for upgrades that can amount to tens of thousands of dollars.

Those investments — charging stations, specialized tools and training for repair people — are essential. The dealership needs to service a vehicle whose battery and design are vast departures from the internal-combustion vehicles they’ve known for a century. And they need to be ready to supply its electric fuel.

VW’s upping of the ante raises a question. Should the automakers, in addition to the billions of dollars they are spending on making EVs, spend yet more to get their dealers ready?

The uptake of EVs "hinge on this partnership between manufacturers and dealers," said Rachelle Petusky, a research manager at Cox Automotive.

Last year, Petusky co-wrote a survey of more than 300 U.S. auto dealers and their relationship to EVs. It found that only 9% of dealers thought their parent auto company was pressuring them to reach EV sales targets.

That is consistent with other reports that automakers, while touting their commitment to EVs, frequently deny dealers the kinds of support they need to sell an entirely different kind of car.

Last year, the Sierra Club did a survey of 900 U.S. auto dealerships. It found that less than a quarter sold EVs, and those that did often did little to showcase them. Salespeople were often uninformed on crucial selling points, like what sales rebates were available and where to find charging stations.

The expenses that lie in the background — the service bays and the installation of chargers — are often ignored.

"That’s what a lot of dealers are asking for," said Petusky. "And to some degree, that’s limiting the sales of EVs being higher than they are."

Policymakers are interested in electrifying cars as a way to cut emissions and address climate change. But their interest is far outstripping interest among consumers.

Car shoppers get nudged in one direction or another by the dealer. And the dealer — usually a franchisee that sells only one or a few brands of car — watches its parent automaker closely for cues to what’s important.

The cue that Scott Keogh, the CEO of Volkswagen of America, gave to his dealers two weeks ago was unambiguous.

At the National Automobile Dealers Association meeting in Las Vegas, he pledged that VW would "match the dealers 50 cents to the dollar" for EV investments in their facilities, according to an Automotive News story and confirmed by a VW spokesman.

VW is among a handful of automakers, including Honda Motor Co. and Nissan Motor Co., that provide substantial financial help for dealers. The three major U.S. automakers — GM, Ford and Fiat Chrysler Automobiles NV — provide little to none.

VW’s first long-range all-electric SUV, dubbed the ID.4, is due to be unveiled in April at the New York International Auto Show. It will initially be made in Europe as the company prepares a new electric factory at its plant in Tennessee.

Support will be given to all 650 VW dealerships in the United States, with some EV-friendly markets getting more subsidies than the others. "We want to make sure dealers are ready for electrification," to prepare both their physical plant and their marketing, Keogh said. "So we are going to financially invest with our dealers to make sure our dealer body is ready."

VW, the world’s second-largest automaker, is singularly aggressive in moving into electric cars. Since its "dieselgate" scandal several years ago, when it was discovered that VW diesel models had been designed to cheat on emissions tests, it has staked its future on the electric transition.

A GM dealer in the Midwest, who asked not to be named to avoid conflict with his automaker, said the terms of a deal with the automaker emerged when the all-electric Chevrolet Bolt started shipping three years ago.

"They said, ‘Would you like to sell an all-electric vehicle?’ Then you need to do these things," he said. "’You have to have an L2 system’" — the generic kind of charging station found in many residential garages — "’at least two of them. You have to have three technicians who are trained. You have to have these particular tools.’

"The financial onus is on the dealer," he added.

In exchange, GM allocated a few Bolts for the dealer to sell. The financial reward for the dealer was no different from any other car. The assumption, he said, was that it was an investment that would pay for itself as GM offered a swelling fleet of EVs.

Similarly, a Ford dealer told E&E News last fall that the company had offered him a similar trade to sell the Mustang Mach-E, which will be Ford’s big bet in EVs when it rolls out next year (Energywire, Oct. 16, 2019).

Adam Nelson, the general manager of Red Rock Ford in Dickinson, N.D., said he would get several Mach-Es to sell in exchange for what he estimated to be up to $23,000 in investment. That included two charging stations, service bay equipment and sending mechanics to special training sessions.

Ford and GM both gave statements to E&E News affirming their support for EVs. However, they neither confirmed nor denied the arrangements described by their dealers.

The other major U.S. automaker, Fiat Chrysler, declined to comment for this story.

Though now Italian-owned, Fiat Chrysler owns some storied American brands, including Jeep, Dodge and Ram. The company has said it will produce an electric or hybrid version of every Jeep model by 2022. It also plans to reintroduce the Fiat 500e, a minicar, to the United States.

‘Skin in the game’

Foreign-owned automakers, at least some of them, are committing funds to the dealer transition.

American Honda Motor Co. said that it had helped install charging infrastructure at over 450 dealerships in the United States to support its Honda Clarity, which is sold as both a pure electric vehicle and as a hybrid plug-in. "American Honda assisted dealers by subsidizing hardware, engineering, permitting, and installation costs, as well as providing project coordination," said spokeswoman Natalie Kumaratne in an email.

Nissan USA, which makes the Leaf, one of the longest-standing EVs in the country, said it has spent $60 million on charging infrastructure, some of it donated to dealers. That includes fast chargers, which are significantly more expensive, at 387 Nissan dealerships, according to spokesman Jeff Wandell.

Kia Motors Corp. didn’t provide a subsidy to its 108 dealers who have EVs, according to a spokesman. A spokesman for Hyundai Motor Co. said the company picks up the costs of training but doesn’t supply money for chargers and tools.

Audi AG, whose electric e-tron is now available at U.S. dealerships, declined to comment. And Porsche AG, which advertised its new electric Taycan in the Super Bowl a few weeks ago, did not reply to requests for comment.

In order to sell EVs, a dealer usually needs at least two charging stations, one for customers and one for the service shop. A study by the Rocky Mountain Institute last month estimated that a commercial charger costs between $2,500 and $4,900.

A dealership also needs equipment in the service bay. That can include a special lift on a trolley that can support the heavy battery when it needs to be removed and tools with rubberized grips for working on high-voltage systems.

Then there’s training for the service people, who are used to working on lower-power electrical systems of a car with a traditional internal-combustion engine.

The GM dealer in the Midwest said that a dealer being on the hook for its own EV investments has its benefits.

"With some skin in the game," he said, "they in turn will probably be more attentive to that particular product line."