U.S. bids adieu to Paris accord amid chaotic election 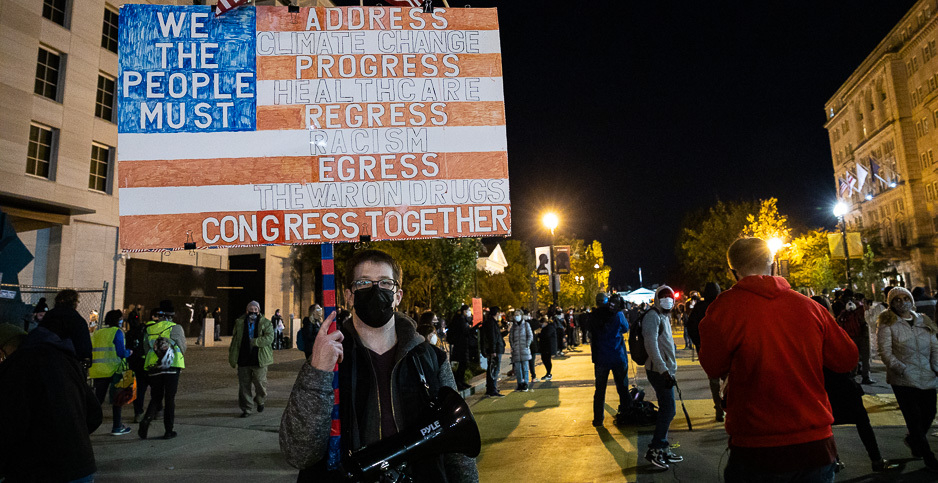 A demonstrator in Washington last night calling for action on climate change and other issues. Francis Chung/E&E News

The United States officially leaves the Paris climate agreement today with the presidential election still hanging in the balance.

The formal exit solidifies a move first announced by President Trump in 2017, and it leaves the United States largely alone, with nearly 200 other countries remaining in the 2015 agreement.

But it all hinges on an election that’s still undecided as of early this afternoon. Democratic nominee Joe Biden has pledged to reenter the agreement, meaning the U.S. absence could last just a few months.

"As we await the official results of the presidential election, the United States — the world’s second largest emitter of greenhouse gas emissions — is squandering global credibility and good will as the only nation to quit the 2015 Paris Climate Agreement," Gregory Wetstone, president and CEO of the American Council on Renewable Energy, said in a statement this morning.

Even if Biden emerges victorious in key swing states and takes the presidency, there are still outstanding variables.

The country is likely not on track to meet the goals it originally laid down in 2015 to honor the global goal of keeping warming under 2 degrees Celsius — a 26% to 28% cut in greenhouse gas emissions compared with 2005 levels by 2025.

That target will also be obsolete soon, with countries expected to ramp up their emissions pledges under the agreement in the coming months. U.S. involvement could affect how those so-called nationally determined contributions take shape (Climatewire, Nov. 3).

"The obligation would be for a new round of NDCs, and the question then is, what does a Biden administration do in the way of executive orders? What expectations can we have about the rate of reductions achievable with such executive orders?" said Jonathan Pershing, program director of environment at the William and Flora Hewlett Foundation. "That set of questions is yet to be answered."

And if Biden wins and Republicans retain control of the Senate and add seats in the House, climate policy to achieve more ambitious targets would face a difficult, if not impossible, path through Congress.

If Trump wins, meanwhile, the attention could turn to other countries, particularly those like Japan, South Korea and China that have already made net-zero commitments, said Pershing, a former special envoy for climate change at the State Department.

"If the president is reelected — and if the U.S. consequently stays out of Paris and doesn’t significantly ramp up its climate effort — global ambition will likely suffer," Daniel Bodansky and Elliot Diringer of the Center for Climate and Energy Solutions wrote in a blog post yesterday.

Trump announced withdrawal from Paris with a Rose Garden speech just a few months after he took office but today was the earliest the country could officially exit.

The United States nonetheless could continue on a downward emissions trajectory, with renewables growing cheaper and action at the state level.

"We hope to see America rejoin the Paris Agreement, but either way the nation’s renewable energy sector remains committed to doing its part to keep the U.S. within striking distance of Paris climate targets, delivering the clean energy economy Americans want and deserve," Wetstone said.

That doesn’t mean greens are letting up. Rachel Cleetus, policy director for the climate and energy program at the Union of Concerned Scientists, called the withdrawal a "shameful act."

"The United States — like many other parts of the world — has faced a relentless barrage of climate change-related disasters this year, including destructive hurricane and wildfire seasons that have devastated communities," she said in a statement this morning.

"In the first nine months of 2020 alone, we have endured sixteen extreme weather events, each costing at least $1 billion and collectively leading to nearly 200 deaths, with communities of color and low-income communities often experiencing the brunt of the devastation," Cleetus said.

May Boeve, executive director of 350 Action, said the formal withdrawal today "demonstrates what’s at stake in this election." "What we need now is all hands on deck for global climate leadership," Boeve said in a statement.