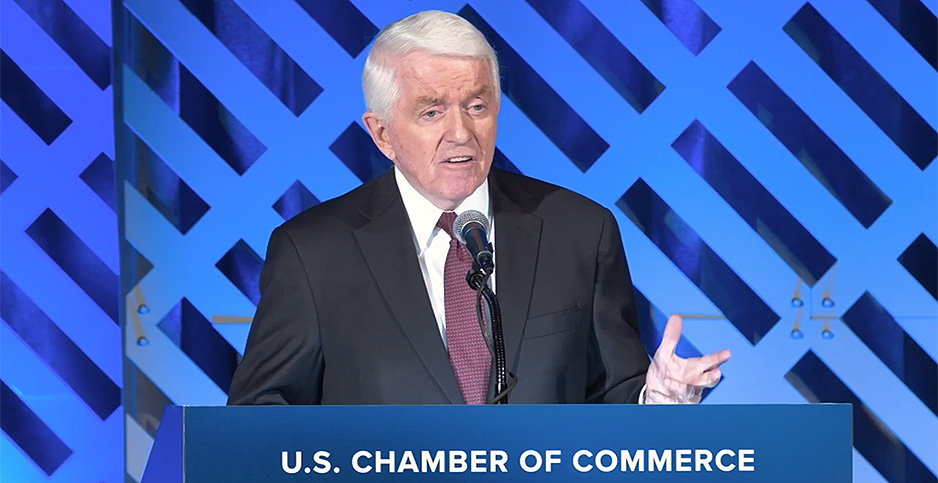 U.S. Chamber of Commerce CEO Tom Donohue this morning called for bipartisan action on climate change, part of the organization’s slow drive away from outright opposition to climate policies.

In his annual State of American Business address this morning, Donohue said lawmakers should move on a variety of middle ground issues, including "35 bipartisan bills that can help address climate change through innovation and investment."

"Does it sound like we can afford to take the year off?" Donohue said. "Of course not. Inaction is not an option. Let’s flip the conventional wisdom that says we cannot get anything done in an election year."

The comments fit into an ongoing shift in the Chamber’s public stance on the issue, but they weren’t exactly a ringing endorsement of the kind of aggressive policy that experts say will be needed to avert catastrophic climate change.

The organization formed a task force on climate action last year to assess the positions of its members, as climate becomes an increasingly prominent issue in the 2020 presidential race.

It has come out with other major trade groups in support of various energy innovation measures, such as the "Utilizing Significant Emissions With Innovative Technologies (USE IT) Act," S. 383, and the "Nuclear Energy Leadership Act," S. 903 (E&E News PM, Oct. 3).

But the Chamber, which vehemently opposed the 2009 Waxman-Markey cap-and-trade bill, is still a long way from supporting carbon pricing, a policy endorsed by many of its members, or other more ambitious measures to slash greenhouse gas emissions.

And while the association now officially supports the Paris Agreement, it has backed various Trump administration deregulatory actions and resists policies that could hurt the energy companies in its membership.

The group quickly issued a statement this morning, for instance, supporting the administration’s rewrite of the Council on Environmental Quality’s National Environmental Policy Act regulations, which environmentalists fear could eliminate climate change as a consideration in environmental reviews.

In his speech this morning, Donohue noted his opposition to some of the policies championed by Democratic presidential candidates, namely bans on fracking or new fossil fuel development on public lands.

While the group generally does not directly engage in presidential politics, Donohue cautioned against "an outright ban on the energy production that has strengthened our national economy and security."

"The Chamber stands proudly and firmly on the side of free enterprise," Donohue said.