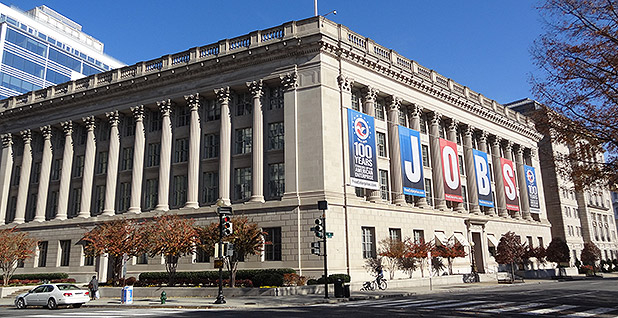 The U.S. Chamber of Commerce is splitting with President Trump over his rollback of Obama-era clean car standards.

Until now, the business heavyweight had largely refrained from criticizing the high-profile environmental regulatory rollback.

But yesterday, the Chamber’s Global Energy Institute released a scathing report saying the proposal would lead to "chaos and confusion throughout the country."

The report pointedly began by quoting President Ford, who addressed the Chamber in 1975, warning of the potential follies of deregulation.

"President Ford’s pitch to the business community was not deregulation, but smarter regulation that recognizes the complex factors affecting costs and benefits — and ultimately, American consumers," the report said.

The Chamber went on to rebuke the Trump administration for seeking to dismantle the so-called One National Program for fuel economy.

Under the One National Program, California and the federal government have historically harmonized their clean car standards.

But as part of the rollback, the Trump administration is proposing to revoke California’s Clean Air Act waiver for greenhouse gases, which gives the state the authority to set tougher tailpipe pollution rules.

That proposal sets up a lengthy legal battle with California and dozens of other states that have adopted the tougher regulations.

While the litigation plays out, automakers will be left with prolonged regulatory uncertainty, undermining their long-term planning, said the Chamber report.

The proposal is "sure to result in a storm of complex litigation that will take years to resolve, injecting even more uncertainty into markets and disrupting efforts to plan, invest, and deliver continued fuel economy and emissions gains," the report said.

"The U.S. Chamber of Commerce urges you to redouble efforts to identify a workable path forward on light duty vehicle fuel economy and greenhouse gas standards that provides regulatory certainty, continues progress on mileage and emissions reductions, and preserves a unified national program for vehicle sales," the letters said.

The report ultimately builds on industry criticism of Trump’s environmental rollbacks — an unusual dynamic that has gained prominence in recent months.

In June, 17 automakers sent a letter to the president warning that the car rules rollback would lead to "an extended period of litigation and instability."

Then last month, four major car companies bucked Trump by signing a deal with California to improve the fuel economy of their cars and trucks in the coming years (Greenwire, July 25).

Gretchen Watkins, president at Shell Oil Co., wrote in a March blog post that the Trump EPA was going down the wrong path for the planet and the natural gas industry.

"At Shell, we generally don’t make a habit of trying to tell governments how to do their jobs," Watkins wrote. "I am breaking that rule today to request that the Environmental Protection Agency continue the direct regulation of methane emissions."

In addition, some utilities oppose the Trump EPA’s plan to revisit the legal basis for its 2012 regulations on power plant mercury emissions, as they have already spent billions of dollars on installing new technology to curb emissions.

David Doniger, a lawyer at the Natural Resources Defense Council, called it "bizarre" that the Trump administration would muscle through proposals over the objections of industry.

"It’s bizarre," Doniger said in an email. "The last thing business wants is regulatory uncertainty and litigation. Yet for industry after industry, Trump’s deregulators are pushing rollbacks that the companies don’t want. The party of business is now the party of business chaos."