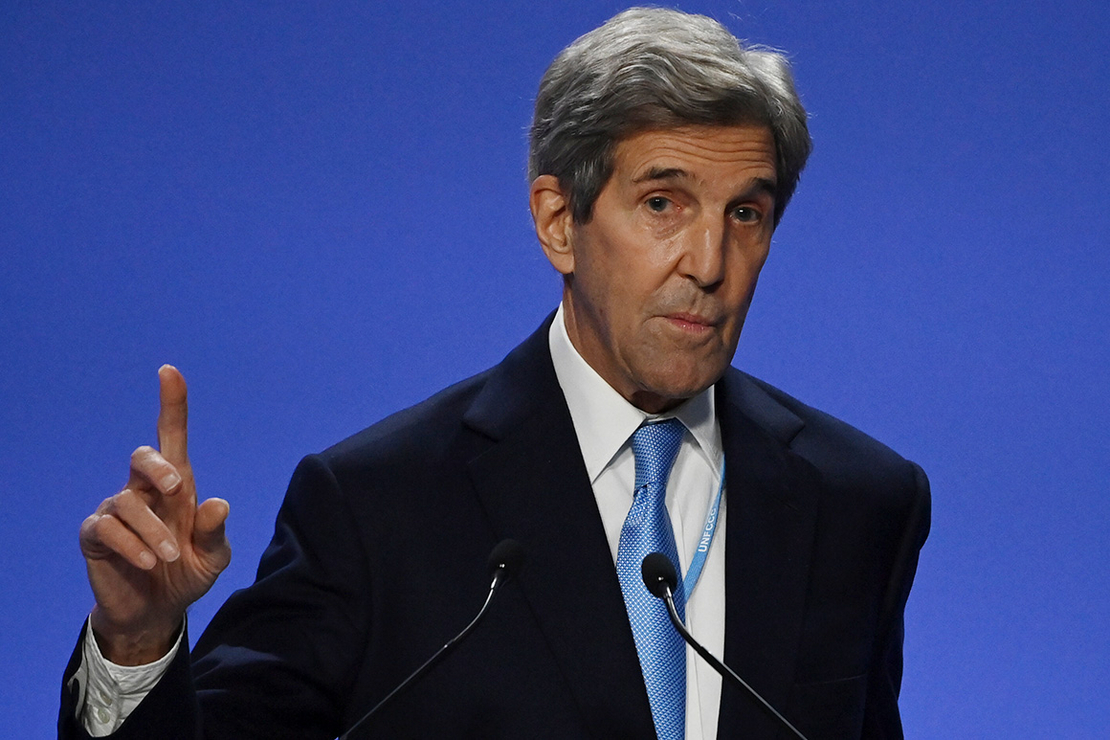 GLASGOW, Scotland — The U.S. and China announced a wide-ranging plan for climate cooperation yesterday to inject momentum into global efforts to contain warming.

The joint declaration comes as climate talks speed toward a conclusion here, and officials hope that cooperation between the world’s two largest emitters could pave the way for progress at this year’s summit.

“And as I’ve said many times, the United States and China have no shortage of differences, but not on climate," said U.S. climate envoy John Kerry. "On climate, cooperation is the only way to get the job done."

The agreement calls for a decade of bilateral climate work, including collaboration on regulatory frameworks and best practices, sharing of carbon capture technology, and actions to rein in both carbon dioxide and methane.

By the next round of climate talks, to be held in Egypt one year from now, the U.S. and China have agreed to develop new methane policies for the energy, waste and agricultural sectors.

The plan calls for a summit on methane mitigation in the first half of next year. It notes the Biden administration’s recently released methane road map, which includes proposed EPA rules. And it includes a pledge by China to develop a “comprehensive and ambitious” national plan on methane to significantly reduce emissions this decade.

Notably, China is not among the dozens of countries that have signed onto the Global Methane Pledge, a U.S.-European Union initiative that aims to reduce methane emissions 30 percent by 2030. Methane is the second-most-important greenhouse gas after carbon dioxide and a major contributor to short-term warming.

Other points of collaboration outlined in the agreement are geared toward increasing renewable energy capacity on the U.S. and Chinese power grids, boosting energy efficiency, and combating deforestation. Both countries joined a global deforestation pact announced last week.

The agreement was notable because China and the U.S. have been at loggerheads throughout these talks, trading criticism in the press — and sometimes from the podium — and going head-to-head in negotiating rooms, where parties are working behind the scenes to find common ground on issues ranging from transparency of emissions accounting to aid for adaptation and those dispossessed by climate change.

That the U.S. and China put aside their differences, for the moment at least, may help ease fears that tensions between the world’s biggest climate polluters would stand in the way of progress at these pivotal climate talks. That’s particularly true if it translates into more climate ambition in the last days of negotiations at the climate conference known as COP 26.

The deal signals that there is an open line of communication between China and the United States, said Joanna Lewis, director of the Science, Technology and International Affairs Program at Georgetown University.

The statement also puts on paper many of the things China has said in domestic policy documents and speeches but that have not made their way into its official climate targets — what’s known as its nationally determined contribution, or NDC.

“Non-CO2 gases have been notably absent from China’s NDC, and China didn’t sign the methane pledge, so the language on methane clearly helps to address this omission,” Lewis said.

China’s NDC aims to peak CO2 emissions before 2030 and achieve carbon neutrality before 2060. Critics say it will need to reach net zero far earlier in order to limit global temperature rise to the 1.5-degree-Celsius limit laid out in the Paris Agreement.

Li Shuo, global policy adviser at Greenpeace China, said the U.S. and China both have work to do before they can be seen as climate leaders.

“Both sides still fall well short of what’s needed in ambition and implementation,” he said. “The U.S. is not convinced by China’s climate targets. China is skeptical about the U.S. fulfilling its promises.”

The declaration creates more space for an ambitious outcome at COP 26, because the countries recognize there is a gap in action and that they should both do more in this decade to close it, said Byford Tsang, China strategy lead at E3G.

To show that they’re serious, they’ll need to rally support from other countries, he said.

The United States has spent these talks trying to reassure the world that it’s back and ready to lead, after years of inaction during the previous administration.

Biden, who spoke on the first full day of the conference last Monday, has deployed a team of Cabinet members to talk up administration policy on methane abatement, electric vehicles, climate change in foreign policy and other topics.

But Chinese President Xi Jinping did not attend those talks, and President Biden pointed the finger at China in a speech at the Group of 20 for not doing enough to address global warming.

China and the U.S. have united in support of some pledges and not signed on to others.

Both committed to an agreement at the G-20 last month to stop providing public financing for coal power development outside their borders by next year. But neither signed onto a coal phaseout pledge the United Kingdom unveiled last week at COP 26.

Landing yesterday’s agreement was not without work, Kerry said.

He and his counterpart, Xie Zhenhua, have met more than 30 times since February, and Biden spoke weeks ago with President Xi about how they could cooperate on climate, despite major tensions on other geopolitical issues, said Kerry.

United Nations Secretary-General António Guterres said in a tweet that he welcomed the agreement.

“Tackling the climate crisis requires international cooperation and solidarity, and this is an important step in the right direction,” he wrote.