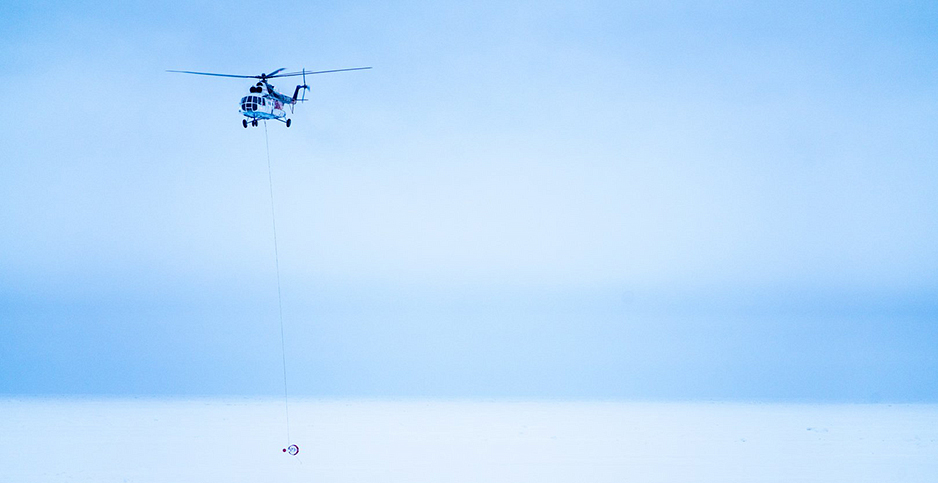 A helicopter from the Akademik Fedorov searched yesterday for an ice floe that could carry the MOSAiC Expedition across the central Arctic. Hans Honold/@AWI_de/@MOSAiCArctic/Twitter

ON BOARD THE AKADEMIK FEDOROV, Barents Sea — Perched on a top deck of the German icebreaker Polarstern is an enormous, gleaming-white scanning radar system that slowly rotates against the sky.

It’s in for a long ride. For the next 13 months, the machine will drift with the ship across the central Arctic, providing 3D observations of clouds, precipitation and other characteristics of its surroundings as it passes along. They’ll be some of the first measurements of their kind ever taken so far north.

"We’ve never had anything like that in the Arctic before, in the Arctic sea ice area," says Matt Shupe, an atmospheric scientist with NOAA and the Cooperative Institute for Research in Environmental Sciences at the University of Colorado, watching it spin from the deck of the Polarstern.

The scanning radar is one of about 60 cutting-edge instruments placed on the ship by the U.S. Department of Energy. The collection derives from the atmospheric radiation measurement, or ARM, mobile facilities — a movable group of machines and instruments that collect data on clouds and aerosol particles and their effect on the transfer of energy between earth and atmosphere.

This particular ARM facility has traveled all over the world, according to Shupe. It’s been to China, India, Germany, Africa and even Antarctica. But few of these instruments have ever been deployed at the top of the world, much less on a year-round basis, said Shupe, a principal investigator on the Energy Department’s project and a co-leader of the MOSAiC mission.

"This is totally ground-breaking," he said.

The ARM facility is the single biggest project on the largest Arctic science mission in history.

Polarstern is the centerpiece of the MOSAiC Expedition, a 13-month voyage through the central Arctic spearheaded by the Alfred Wegener Institute for Polar and Marine Research in Germany. The mission will collect an unprecedented volume of data on the mysterious central Arctic climate system, one of the most remote and poorly understood regions of the world.

The ARM project isn’t just the largest collection of instruments on board — it was also the first to be funded, approved before even the Polarstern’s funding was secured, according to Shupe. Altogether, the Energy Department is contributing about $10 million to the $150 million MOSAiC mission.

"I have so much respect for all of the agencies, the people, universities, that were willing to take a chance on [the expedition]," said Shaima Nasiri, the Energy Department’s atmospheric system research program manager, during a visit to the Polarstern just before its launch from Tromsø, Norway, on Sept. 20. "And I’ll put us in that boat, in terms of we were willing to take a chance and commit the resources, I think before any other U.S. funding agency was willing to."

Other federal agencies have also contributed significant resources to the mission.

The National Science Foundation is the largest U.S. sponsor of MOSAiC projects, contributing about $27 million. The agency is supporting 23 projects in total, according to an email from spokesman Mike England of NSF’s Office of Legislative and Public Affairs. They range from atmospheric research to studies of the sea ice and snow, ocean physics and chemistry, and the Arctic ecosystem.

NOAA and NASA are also supporting a handful of projects.

NASA doesn’t typically fund this type of fieldwork, said NASA researcher and MOSAiC participant Nathan Kurtz. Its earth-system research is more often focused on satellite missions and remote sensing. But MOSAiC is a prime opportunity to investigate how well satellite algorithms perform in the central Arctic, where there have been few chances to compare remote sensing data with on-the-ground observations.

"For me, that would be my primary interest," he told E&E News in Tromsø, shortly before the Polarstern’s launch. "Secondary is just how can fieldwork better be used, what else can we do for the remote sensing satellite or airborne measurements."

Altogether, MOSAiC will include collaborations from hundreds of researchers representing 19 nations.

One of the mission’s hoped-for outcomes is an improved understanding of climate change in the Arctic, where temperatures are rising at about twice the global average rate. Many scientists believe Arctic warming may have profound effects on climate and weather patterns around the world, although the exact mechanisms remain poorly understood. As a result, investigations of the Arctic climate will likely help scientists make better predictions about the worldwide effects of climate change.

The expedition has launched at a fraught time for U.S. climate policy. In recent years, the Trump administration has worked to overturn a number of climate-related policies and regulations and has also moved to withdraw from the Paris climate agreement. The White House has also proposed funding cuts for federal climate and environmental programs. President Trump has made it clear he has little regard for climate science.

But the research being carried out on the MOSAiC Expedition should transcend political boundaries, says Shupe.

"We’re not pushing any kind of agenda, other than that we’re trying to learn about the earth system and how it works, and prove our models so our models can be a tool for all of us to better understand what’s happening with our globe now, where it’s gonna go in the future, how our activities are affecting the globe," Shupe says. "So that’s all nonpartisan, in my opinion."