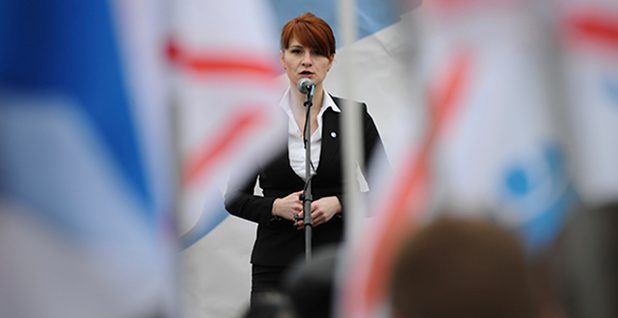 The company’s lobbyist revised its filings with Congress last month as it was being linked to an unfolding spy scandal that has drawn in the Kremlin and the National Rifle Association.

The filings now show that Konstantin Nikolaev, Mikhail Yuriev and Andrey Kunatbaev together own 88 percent of the fuel-export company. On previous disclosures dating back to 2014, company representatives had indicated there was no substantial foreign control.

Nikolaev has been linked in news reports to Maria Butina, the Russian woman accused of acting as an unregistered agent of her government. In a July 22 story, The Washington Post quoted a source as saying Butina had told the Senate Intelligence Committee she’d received financial support from Nikolaev.

American Ethane played a prominent role in a trade ceremony during President Trump’s November trip to Beijing. Trump and Chinese President Xi Jinping looked on as executives signed 15 trade deals. One of them was American Ethane CEO John Houghtaling II, signing a $26 billion deal to sell ethane to China.

The company website lists Nikolaev as a member of the company’s board of directors, along with Kunatbaev.

Yuriev, a former Russian politician and businessman, is not. It’s not clear who owns the remaining 12 percent, but The Guardian reported that Alexander Voloshin, a former aide to Russian President Vladimir Putin, has a "secret investment" in American Ethane.

The Guardian in the same story reported that Voloshin is part of a consortium of Russian investors that at one point included the oligarch and billionaire Roman Abramovich.

American Ethane’s revised disclosure was posted online by the Senate on July 20, two days before the Post story on Butina and Nikolaev.

Federal prosecutors allege Butina, 29, served as a covert Russian agent while living in Washington. They are accusing her of using sex and deception to forge connections and gather intelligence for a senior Russian official. They also say she sought to infiltrate U.S. political organizations including the National Rifle Association. She has pleaded not guilty.

Butina, who was arrested last month, told the committee investigators in April that Nikolaev provided funding for a gun-rights group she represented, the Post wrote. A spokesman for Nikolaev confirmed to the paper that he was in contact with her as she was launching the gun rights group in Russia between 2012 and 2014. He declined to confirm whether Nikolaev gave her financial support and said the billionaire has never met Trump.

But the Post quoted another source saying Nikolaev’s son Andrey, who is studying in the United States, volunteered in the 2016 campaign in support of Trump’s candidacy. Two sources told the Post Nikolaev was spotted at the Trump International Hotel in Washington during Trump’s inauguration.

Nikolaev has also invested in other U.S. companies, including Grabr, a peer-to-peer online marketplace.

American Ethane’s website describes Nikolaev as the founder of several logistics, transportation and infrastructure companies, including Russia’s biggest private rail transport operator and one of the largest port operators in the country. According to the revised lobbying disclosure, he owns 30 percent of the company while the other two men each own 29 percent.

American Ethane says on its website that it has worked since 2015 to develop ethane in the Asian markets for power generation.

The company also says it is planning the largest ethane export terminal on the Gulf Coast, although the location within the region is unclear. After signing the deal in China, it signed a supply and co-development deal with the Energy & Minerals Group (EMG), a private equity company co-founded by former Plains Exploration & Production Co. chief John Raymond. Under the agreement EMG is to provide the company with the capital investment for the export terminal and the ethane to be exported. Also, EMG is to create a company to supply American Ethane with up to 480,000 barrels per day from various U.S. midstream companies and producers.