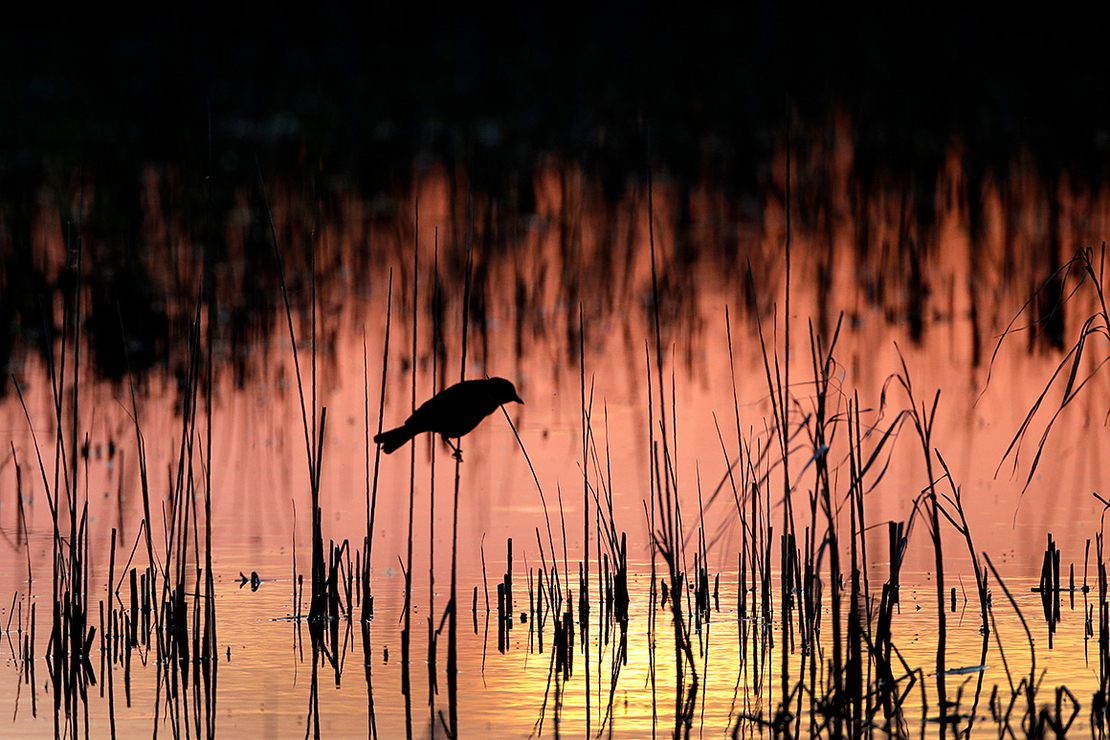 The Biden administration is looking at using wetlands to capture carbon and help meet climate goals. A yellow-headed blackbird, pictured, perches in a wetland near Menoken, N.D. Charlie Riedel/AP Photo

Americans have been draining wetlands for farming and development since Colonial times.

But climate change may reverse that tide — from destruction to restoration.

Federal scientists are studying whether heat-trapping carbon dioxide can be sucked out of the atmosphere and sequestered in restored salt marshes, sea grass beds and mangrove swamps. And those wetlands can in turn protect communities along the coast from rising seas and fierce, frequent climate-driven storms.

“The concept that’s forming is that what we need to do is massive-scale ecosystem restoration as soon as possible to begin absorbing as much carbon dioxide as we can and diminish the amount of overshoot that we have in atmospheric greenhouse gases this century,” said Kevin Kroeger, a research chemist at the U.S. Geological Survey’s Woods Hole Coastal and Marine Science Center.

Across the Lower 48 states, wetlands hold at least 3.2 billion metric tons of CO2 equivalent, by one estimate — roughly half the country’s net total greenhouse gas emissions in 2019.

That may sound good, but there are many questions that need answers.

Scientists know which types of wetlands sequester the most CO2, but there’s no comprehensive map of degraded wetlands or prospectus on what their restoration would mean for efforts to sequester greenhouse gases.

Kroeger and his team of nine researchers are looking for those answers. At the Biden administration’s behest, the scientists recently estimated the potential for national-scale carbon management in tidal wetlands.

The researchers found that conserving existing wetlands, restoring 35 percent of marshes that have been impounded or drained, and allowing coastal wetlands to naturally migrate toward land as sea levels rise could create a substantial sink for CO2 and human-caused methane by 2050.

Their findings, which haven’t yet been published, are tied to the administration’s commitment to limiting emissions under the Paris climate accord, as well as to an ongoing effort to conserve 30 percent of the country’s land and water by 2030, Kroeger said. The administration will present its emission-cutting plans to the United Nations’ climate summit in Glasgow, Scotland, in November.

Ensuring wetlands like coastal marshes can absorb existing and future emissions is critical to giving nations a chance of limiting global warming to less than 1.5 degrees Celsius above preindustrial levels — the level that the Intergovernmental Panel on Climate Change calls the trigger point for unleashing global warming’s most damaging effects.

Given the difficulty of hitting that goal, Kroeger said, restoring wetlands may be an important weapon against climate change as large-scale deployment of technologies for removing CO2 from the atmosphere won’t be ready for another two decades.

Laura Petes, chief of staff for climate and environment at the White House Office of Science and Technology Policy and assistant director for climate resilience, confirmed the administration’s interest in the wetlands work. Research is underway at EPA, NOAA and USGS to help the administration grasp the “math behind these systems” and just how much carbon wetlands can sequester.

“There are active conversations underway about how this type of information can inform commitments moving ahead” to the Glasgow summit, Petes said.

All eyes on Mass. wetland project

Kroeger’s team is compiling the first inventory of degraded wetlands in the United States, creating a tool that they hope helps scientists understand how changes in soil are affecting the release or sequestration of carbon and methane emissions.

“Those are kind of new frontiers in terms of the science, but we’re making really fast progress on it right now,” he said.

Kroeger is honing in on the damage that roads, dikes, levees, sea walls and agricultural berms are doing to the capacity of wetlands to sequester emissions.

Anything that blocks tidal flows can turn a saltwater wetland into a freshwater marsh and release more methane, a powerful greenhouse gas.

On the flip side, removing water-control structures allows seawater to return to drained areas, thereby restoring the marsh and enhancing the soil’s ability to lock in more carbon and methane.

Kroeger pointed to a major Massachusetts wetland restoration project, in which a century-old dike is being removed to allow seawater to return to a Cape Cod salt marsh.

The $62 million Herring River restoration aims to revive marshes in a 1,000-acres estuary by replacing a dike with a bridge to allow a larger influx of salty, sediment-carrying tides from the Atlantic Ocean. Doing so will saturate wetland soil that has subsided over the past century and allow it to collect sediment and grow more robust marsh plants.

“That’s key because that means they’re storing carbon even faster, because they’re gaining elevation in response to sea-level rise every year,” Kroeger said.

Today, the Herring River marshlands, much like other coastal wetland ecosystems, are cut off from the sea, clogged and struggling with low oxygen and invasive species.

Those lands, Kroeger said, are “on a razor’s edge” given the construction of a “checkerboard” of infrastructure such as roads, railroads, berms, levees and sea walls, all hardened structures that separate wetlands from their lifeblood.

“As sea-level rise accelerates, with changing climate, that provides a requirement that this whole set of ecosystems from the saltiest wetlands to the freshest wetlands near the coast … all need to pick up and move landward,” Kroeger said. “And they all have to do it in unison. Otherwise, the salt marshes and the mangroves in between will be extinguished.”

The Herring River project could have far-reaching implications for carbon markets.

Proponents say the site has the potential to be the first “blue carbon” offset project in the nation and become a model for similar restoration efforts.

Herring River is part of “Bringing Wetlands to Market,” an effort involving USGS, the National Park Service and Friends of the Herring River aimed at examining the potential for restored wetlands to gain credits in the voluntary carbon market.

While Kroeger said analysis is ongoing and not finished, an initial assessment found that if the Herring River project — if it can curb 120 million metric tons of methane and is included in a methane market — could yield revenues of up to $6.4 million, depending on the price of methane credits and models used to estimate offsets.

There are also other benefits.

Financially successful efforts to restore wetlands might have an outsize impact on coastal management and the placement of infrastructure.

Climate projections, for example, suggest up to 90 percent of today’s coastal wetland areas could be lost under high sea-level rise scenarios. And yet researchers in 2018 released a model showing that ensuring more than 37 percent of coastal wetlands have enough space to move inland would lead to an overall gain in wetlands even as seas rise.

“It can be just another climate disaster story, of which there are many,” Kroeger said, “Or, as I tend to view it, an opportunity.”