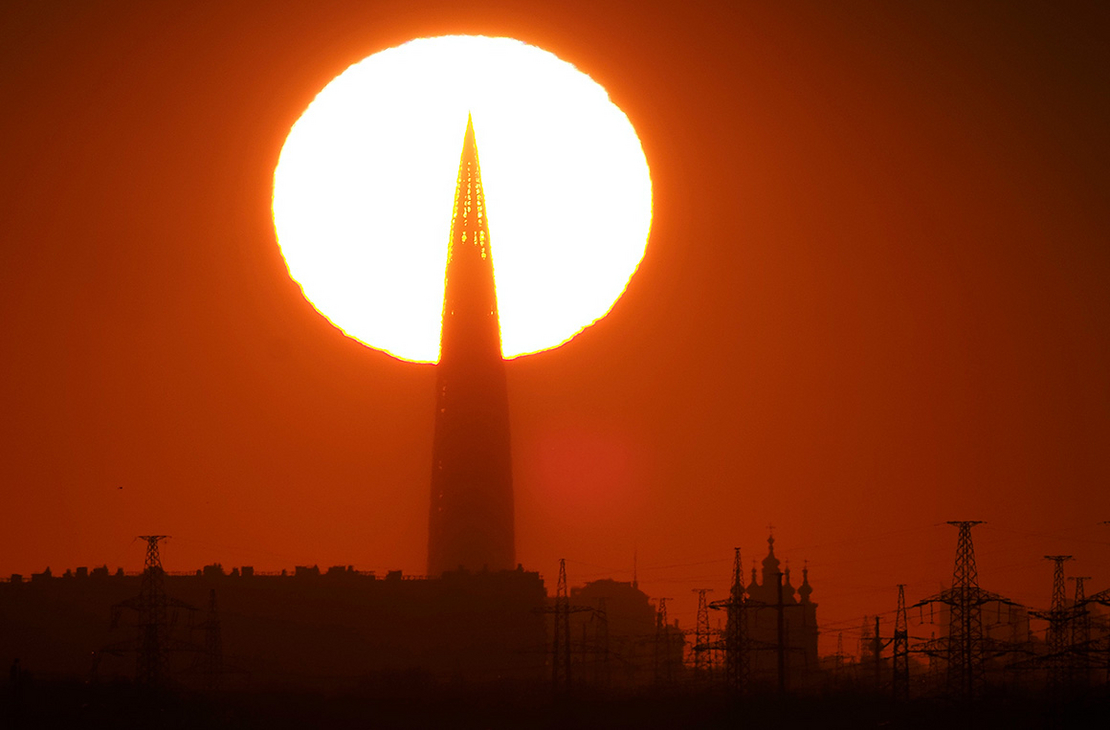 The headquarters of Russian gas monopoly Gazprom is silhouetted against the sunset in St. Petersburg, Russia. AP Photo/Dmitri Lovetsky

Pressure is building on U.S. financial firms to respond to Russia’s invasion of Ukraine by ditching their investments in both Russia and its fossil fuel sector.

BP PLC, Shell PLC and a growing list of other international companies moved this week to drop their Russian investments amid widespread sanctions on Moscow from the United States, Europe and other countries.

BP, for example, announced Sunday it would exit its nearly 20 percent stake in Rosneft, a state-controlled oil company (Energywire, March 1).

Now, environmentalists want Western finance firms to do the same. They say major investment banks with stakes in Russia and its largest emitters should follow suit to further squeeze Russian President Vladimir Putin and his nation’s economy. Doing so, they add, also can help the firms mitigate financial risk.

According to data from Rainforest Action Network, the Wall Street giant is the largest global banker of Gazprom, another state-owned energy company. Between 2016 and 2020, the group says, the firm provided the company with roughly $3.5 billion in financing.

UniCredit SpA, a European commercial bank and Gazprom’s next largest banker, came second at more than $2.3 billion, and was followed by Sberbank, Deutsche Bank AG and Crédit Agricole, which are based in Russia, Germany and France, respectively. Aside from JPMorgan, no other major U.S. banks were in the top 10.

“There are so many corporate connections to Russia. But this just feels like a really big one that hasn’t gotten much, if any, attention. Gazprom is the biggest Russian oil and gas company, and their No. banker is JPMorgan Chase,” said Jason Disterhoft, who leads Rainforest Action Network’s fossil fuel financing campaign.

“It feels like something worth calling out,” Disterhoft added, especially given governments’ and other companies’ mounting efforts to exit the country. “In the context of everything going on, they should be accountable.”

Citigroup Inc. also is under fire for its general investments in Russia and its role as a so-called depositary bank for Lukoil, another Russian oil and gas giant.

According to Citi, the job entails providing a “corporate governance seal of approval” to help companies access international capital and reassure investors that those companies are safe investments.

The bank’s annual investor day was held Wednesday. In response, advocacy groups including Extinction Rebellion NYC, New York Communities for Change, Bank On Our Future and Amazon Watch held a demonstration at Citi’s New York City headquarters to highlight that relationship and to call on the firm to end it for moral-, climate- and risk-related reasons.

“Frankly, every dollar invested in Russian oil and gas supports Putin’s war of aggression, and his ability to wage future wars of aggression. So that’s the ethical implication,” Grace Regullano, a coordinator at Bank On Our Future, said in an interview.

“On the investor side,” Regullano added, “continued investment in Russian oil and gas represents significant risk for Citigroup investors.”

Clark Williams-Derry, an analyst with the Institute for Energy Economics and Financial Analysis, agreed in principle that JPMorgan and other financial institutions have every reason to take a hard look at their Russian investments and relationships — including in the energy sector.

But he did raise a notable caveat when it comes to JPMorgan specifically: “The money has already gone to Gazprom, so by canceling those loans essentially it’s like saying, hey, you don’t have to repay those loans,” Williams-Derry said.

For that reason, he thinks the best course of action would be for JPMorgan to establish a “giant financial no-fly zone” over Russia moving forward.

“Even if you’re ignoring climate concerns, the risk profile for Russia is so high … that a bank like JPMorgan should be carefully reassessing every single trading and banking relationship with every single Russian firm, starting with the fossil fuel firms,” he said.

Notably, MSCI ESG Research LLC downgraded Russia’s environment, social and governance rating to the second-lowest level this week. Those ratings are meant to reflect how governments’ ability to manage their natural resources, workforce, financial systems and more may impact the “long-term sustainability and competitiveness of its economy.”

Aside from downgrading Russia’s rating, MSCI also said it is monitoring the investment outlook of Russian equities given mounting economic sanctions against the country.

JPMorgan, meanwhile, announced that new debt issued by sanctioned Russian entities will not be eligible for the firm’s investment indices, and that it is mulling the possibility of removing Russia from its ESG fund suite.

Matthew Moscardi, a former executive director at MSCI, chalked the moves up to the firms responding to economic sanctions and logistical challenges brought on by major exchanges around the world halting the trading of Russian stocks.

“Oil and gas exports from Rosneft, Gazprom, and Lukoil are essential to Russia’s ability to fund its military, and its ability to maintain leverage in global politics,” the group argued.

In turn, they said the mammoth wealth managers, which rely on passive investment indexes that include companies in every sector across the economy, “can make a real difference by divesting from Rosneft, Lukoil, Gazprom, and the other Russian carbon majors that make up Putin’s war chest.”

Pavel Molchanov, an energy analyst with Raymond James & Associates Inc., said that course of action would largely be symbolic because shifting shares from one owner to another generally does not have financial repercussions for the underlying company.

But if firms such as JPMorgan were to deny Russian companies banking or insurance services, he wrote in an email, that would be a “much more direct means of action.”

“In essence, this is the private-sector equivalent of sanctions,” Molchanov said. “Just as foreign central banks will no longer cooperate with Russia’s central bank in response to Russia’s invasion of Ukraine, it would be a big deal for major international commercial banks to stop working with Gazprom, Rosneft or Lukoil.”

Spokespeople for BlackRock and State Street did not respond to a request for comment.

Vanguard spokesperson Michael Nolan wrote in an email that the firm is “reviewing the various global sanctions and determining the impacts to our funds, and will comply with applicable sanctions and government orders.”

Correction: A previous version of this article misstated the affiliation of Grace Regullano and the organizations behind the demonstration at Citi. While Regullano works for the Sunrise Project, Sunrise spokesperson Jason Schwartz said in this instance she was speaking in her capacity with Bank On Our Future. Schwartz also clarified that the Sunrise Project was not involved in organizing the Citi protest.