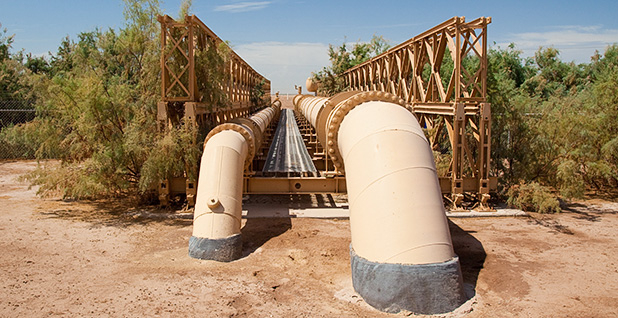 A group of energy industry experts announced today that the amount of producible natural gas in the United States has spiked sharply — up roughly 20% — since its last assessment two years ago.

The increase of 557 trillion cubic feet (tcf) reported today by the Potential Gas Committee is the highest assessment in its 54-year history and has ramifications on everything from climate change to President Trump’s energy dominance agenda. The organization puts total recoverable resources at 3,374 tcf — enough to sustain current levels of U.S. natural gas consumption for over a century.

The latest evaluation "confirms that the U.S. has an abundance of natural gas" in onshore and offshore reservoirs, said Alexei Milkov, the group’s executive director, in a press release set to be unveiled this morning at an American Gas Association event. The Potential Gas Committee is a nonprofit supported by multiple gas groups, including AGA.

Technology improvements and the recent drilling boom have provided a better understanding of U.S. gas resources, said Milkov, who also serves as director of the Potential Gas Agency, a group that gives technical assistance and guidance to the PGC. Shale reservoirs contain the majority of total gas resources in the United States, he said.

The Atlantic coast, where total recoverable gas resources went up 264 tcf from 2016 estimates, saw the largest regional gains by volume, according to the report. PGC attributes that to new drilling and production in the Marcellus and Utica shale plays, which overlap each other in the Appalachian Basin.

In the PGC’s midcontinent region, which includes the oil-rich Permian Basin, recoverable gas volumes shot up by 67% to 615 tcf in year-end 2018. The group said that reflects "intensive" developments of conventional, tight and shale reservoirs in the Permian, which spans West Texas and parts of New Mexico.

The numbers represent what the committee sees as technically recoverable gas, it noted, encompassing "probable," "possible" and "speculative" resources that may not be economical to develop. The group of about 80 volunteer geoscientists and engineers does not include "proved reserves" in its analysis — a smaller category of gas that’s reasonably certain to be produced under current market and operating conditions.

The AGA, which represents natural gas utilities, said the statistics show Americans can rely on the energy source for years to come.

"The United States continues to set new natural gas supply records because of technological improvements and continued learning in gas exploration and production," said Karen Harbert, AGA president and CEO, in a statement.

Harbert also praised natural gas for its role in lowering greenhouse gas emissions and said that any "realistic plan" for a clean energy future should include the energy source as a cornerstone. Last year, natural gas accounted for about 35% of U.S. electricity generation, according to the U.S. Energy Information Administration, often replacing more carbon-intensive coal-fired power plants.

The rise in production is largely driven by growth in the Permian, the agency said in its outlook.

EIA said it expects energy-related carbon emissions to fall by 2.5% in 2019 and 1% the following year relative to 2018 levels in the United States, owing to a "hotter-than-average summer and colder-than-average winter" last year, as well as increased use of less carbon-intensive fuels in the U.S. electricity sector.

The EIA forecast also anticipated that U.S. natural gas inventories would rebound from lows in 2018 as drillers have "more than kept pace" with growing demand from the U.S. power sector and exports.

"EIA expects U.S. inventories levels at the end of October to have grown 16% in the previous 12 months, and once again exceeding the prior five-year average," the outlook noted.

Still, a recent analysis by the Rocky Mountain Institute, a Colorado nonprofit, urged investors to put money into clean energy technologies instead of natural gas, which it said no longer represents the best replacement for emissions-heavy coal (Energywire, Sept. 10).

Nevertheless, when factoring in EIA estimates of proved gas reserves, the PGC assessment put the future U.S. gas supply at 3,838 tcf, up 22% from year-end 2016.

"The record gas resources assessed by the PGC, in addition to record reserves and production reported by EIA, display a strong supply of natural gas in the U.S. for many years to come," said Milkov.