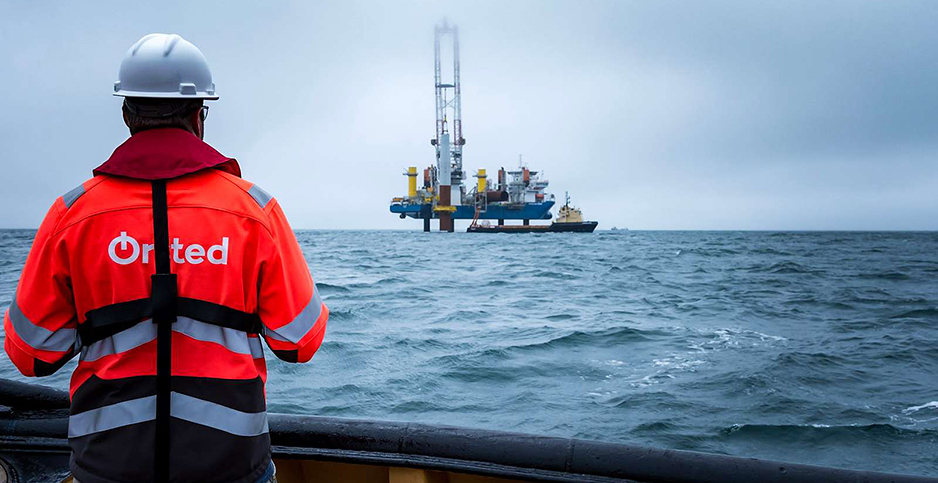 A wind turbine is installed off the coast of Virginia last month for Dominion Energy. Developers say U.S. coastlines are poised for a boom in offshore wind. Orsted

When construction was completed last month on two wind turbines in the rolling Atlantic waters off the Virginia coastline, it marked the passage of a key milestone.

It was the first commercial project built in federal waters and also the boldest plunge yet into this European-dominated business by a U.S. energy company.

"It’s part of our commitment to be the cleanest energy company in the United States," announced Dominion Energy Inc., a Richmond, Va., company that serves over 5 million customers.

The Department of the Interior, which leases offshore wind tracts, has approved 16 projects altogether and an additional seven proposals under review, the agency said. The operating leases are located exclusively on the East Coast, and the list of companies involved in those ventures is likely unfamiliar to most Americans.

Ørsted A/S, a Danish company, is by far the biggest player. It owns or is a partner in seven leases. In addition, it is currently managing the design, procurement and construction of Dominion’s first two turbines, a pilot project that is next to a larger proposed wind farm that Dominion plans to build in 2024. Altogether, Ørsted has developed 26 wind farms around the world.

Also operating along the East Coast are a cluster of other utilities or oil and gas companies from Denmark, Norway, the Netherlands, Germany, Portugal and the United Kingdom. They began to dominate the global offshore wind industry 10 years ago. By now, they have built over 4,000 wind turbines off the coasts of 11 countries. The market’s growth was stimulated, in part, by Japan’s Fukushima Daiichi Nuclear Power Plant disaster in 2011.

Europeans see the U.S. market, which has erected a grand total of seven offshore turbines, as a hatching opportunity to extend their existing businesses. The first five turbines were built by U.S. companies off the coast of Rhode Island in 2016, a project that was later purchased by Ørsted.

Liz Burdock is the president and CEO of the Business Network for Offshore Wind, a nonprofit dedicated to putting together a vast U.S. supply chain that she says will be needed to support the emerging industry. She explained in an interview that, so far, most businesses operating along the East Coast are either oil and gas companies or utilities that got their start in Europe.

"U.S. companies can compete with the Europeans if they wake up to the opportunity, and I believe they are starting to," she said, noting the involvement of Dominion and the Public Service Enterprise Group, a large New Jersey-based energy company. "The real technology behind offshore wind comes from members of the oil and gas industry. We have a lot of that in this country, so it won’t be hard to quickly catch up."

Burdock added: "Five years ago, this was a dream. Now it’s fast becoming a reality."

There’s reason to hope so. The offshore wind industry has created 40,000 jobs in Europe, a landmark that U.S. firms could "easily match" or exceed, she added.

If that happens, it would launch a major industry that could speed the nation toward limiting its greenhouse gas emissions.

The University of Delaware estimates that the projects, located in seven East Coast states, involve capital costs of $70 billion. That investment could result in 18.6 gigawatts of renewable energy — the equivalent output of 18 nuclear power plants — between 2020 and 2030.

Last week, New York raised its ante, calling for an additional 2,500 megawatts of offshore wind electricity that Gov. Andrew Cuomo (D) called "the largest in the nation’s history." The move will be accompanied by a $400 million contribution of public and private funds toward building a network among 11 competing seaports that hope to support offshore wind farms by manufacturing and assembling turbines.

"It’s true that we go big in New York," explained Doreen Harris, president of the New York State Energy Research and Development Authority. She explained the big investment in renewable energy would also help the state recover from the economic slump caused by the coronavirus pandemic.

New Jersey quickly followed, announcing that it will hold a virtual public meeting next week to consider calling for between 1,200 and 2,400 MW of additional offshore electricity.

Polling shows bipartisan support for offshore wind as part the effort by states to address climate change by developing clean energy. Part of that transition will require the build-out of renewable energy sources to power future generations of electric cars.

The economic theory that offshore wind could drive down emissions comes from studies by the National Renewable Energy Laboratory (NREL). Burdock’s group has explored these and other offshore issues in a series of recent virtual seminars for companies involved in the emerging industry.

In one, NREL scientists explained that new, larger wind turbines that Dominion plans to install starting in 2024 could cut offshore electricity costs by 20% to 30% because they are more efficient.

While Dominion’s test turbines are rated at 6 MW of power — the offshore industry’s current average output — the machines the company plans to install in its wind farm starting in 2024 are European-designed turbines rated at 14 MW.

Evan Gaertner, an NREL scientist working on future turbine models, explained at one seminar: "The reference turbine needs to keep up with trends in the industry," noting that they would also have improved efficiency from new blade and turbine structure designs.

"We’re looking for feedback from the larger industry," Gaertner noted.

At the same seminar, Simon Hayes, the head of health, safety and environmental issues at Ørsted, provided some of that feedback. It’s not just the economic allure of the U.S. offshore market that attracts European companies, he explained.

Experienced businesses will be needed to provide "uniform training" to some 14,000 Americans who will be supporting offshore projects by 2024.

Denmark started working on offshore wind in the 1980s after building copies of land-based turbines and then planting them in ocean waters. Within a few years, they began to come apart under the twin challenges of salt water and rough weather.

The Danish Oil and Natural Gas company (DONG) came to the rescue by showing businesses how to build and maintain offshore turbines that could last longer at sea.

By 2017, after it had helped create a strong market for renewable energy in Europe, DONG decided to divest its oil and gas business and changed its name to Ørsted. It commemorated Hans Christian Ørsted, a 19th-century scientist who discovered electromagnetism. "Today we’re dedicated to green energy," the CEO of DONG announced at the time.

A year later, Statoil changed its name to Equinor ASA. Elder Sætre, its CEO, explained that the new name helped the company "use our Norwegian heritage in our positioning as we continue growing internationally within both oil, gas and renewable energy."

Equinor, the majority of which is owned by Norway’s government and its pension fund, was recently awarded the offshore leases that will serve parts of New York, New Jersey and Massachusetts. It’s also assessing possibilities along the West Coast.

Energie Baden-Württemberg AG (EnBW), a leading German offshore wind developer, has an American subsidiary looking for leases on the East and West coasts. It lost a bid for an offshore tract near Massachusetts, but it’s working on another bid for a project near Morro Bay, Calif.

Stefan Kansy, director of new projects for EnBW, recently described the allure of offshore areas in the U.S. to a European audience. "What happens to all of us is that your appetite grows. It was larger than Germany could provide," he explained.

The U.S. offshore oil and gas industry operates mostly in the Gulf of Mexico and has yet to approach offshore wind with the enthusiasm and the money as the Europeans have.

‘Seat of our pants’

A Navy commander during World War II, LaBorde became an inventor, developer and serial risk taker who built a number of companies that prompted the U.S. to start drilling for offshore oil and gas in 1954.

After the war, LaBorde earned his nickname as a "mud doctor" by working on an onshore drilling crew. His job was to prepare the "mud," a heavy lubricant that keeps drill bits sharp and brings rock chips to the surface. LaBorde had an idea for a large, sinkable barge that could rest on the bottom of the Gulf of Mexico, drill for oil and gas and serve as a home for an offshore crew.

His first employer, Kerr-McGee Corp., rejected the idea, but LaBorde found investors to help him build his first rig: "Mr. Charlie." It became famous after it was hired by Shell Oil Co. and brought in a gusher near the mouth of the Mississippi River.

LaBorde went on to form companies that built bigger rigs and the specialized vessels that maintain them at sea. When he retired in 1977, he was praised as "the man behind the rig" but played down his part. "We were all doing this by the seat of our pants," he insisted.

In 1987, bored with retirement, LaBorde bought the company where Blanchard now works — Gulf Island Fabrication — and went back to building rigs. When LaBorde died in 2014, at the age of 98, his company was still at the leading edge of U.S. technology.

It was chosen to build the foundations for the first five U.S. offshore wind turbines in Rhode Island waters for an American company: Deepwater Wind.

They were completed in 2016. Two years later, Ørsted bought Deepwater Wind. Martin Neubert, Ørsted’s CEO of offshore wind at the time, predicted correctly that the deal would help create "the No. 1 offshore wind platform in North America."

The team of U.S. companies that helped build the Rhode Island rigs disbanded while Ørsted’s experts took on additional projects that the Danish company went on to develop in the U.S.

Blanchard’s company, Gulf Island Fabrication, is still interested in the East Coast offshore market, but so far it hasn’t found the right deal.

Blanchard notes that Ørsted and other European firms favor tubular wind turbine foundations called "monopiles" that aren’t fabricated in the U.S. or used in the Gulf of Mexico.

Meanwhile, East Coast states have set differing requirements for their offshore projects and tend to favor companies that set up local offices. These restrictions, plus the need to use turbine components manufactured overseas, make the offshore projects "too expensive for Gulf of Mexico fabricators," Blanchard explained.

Next: Building out the U.S. industry.