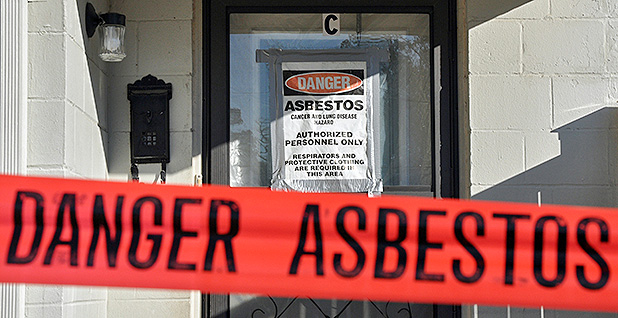 Imports of asbestos are up for the first time in years, raising the stakes on U.S. EPA’s ongoing review of the cancer-causing mineral.

Tariff and trade data from the Department of Commerce and U.S. International Trade Commission show that 705 metric tons of asbestos was imported last year.

That’s more than double the 343 tons shipped to the United States in 2015, according to a U.S. Geological Survey commodities summary from January. The last year imports topped 700 tons was 2013.

Prized for its flame-resistant qualities, asbestos was once widely used in insulation, tiles and other building materials.

But consumption of the mineral has fallen from a record high of 803,000 tons in 1973 due to health and liability issues associated with it. The last U.S. producer of asbestos ceased operations in 2002.

The chloralkali industry is currently the nation’s only major user of asbestos and accounted for an estimated 100 percent of domestic consumption in 2016, rising from an estimated 35 percent of consumption in 2010, the USGS said earlier this year. The industry uses asbestos to manufacture semipermeable diaphragms that help produce chlorine, a commonly used industrial chemical.

EPA’s failure to ban asbestos under the Toxic Substances Control Act of 1976 was often cited by public health advocates as one of the shortcomings of the 40-year-old law, which required chemical regulations to be "least burdensome" to industry. While EPA did move to outlaw the mineral in the 1980s, a federal court gutted its ban in 1991.

After bipartisan legislation to overhaul TSCA was enacted last year, EPA included asbestos as one of the first 10 chemicals it would review under the law (E&E News PM, Nov. 29, 2016).

They raised new concerns today about the increase in asbestos imports, nearly all of which came from Brazil.

"Opponents of an asbestos ban have long argued that asbestos use is shrinking in the United States, but now we know just the opposite is true," Linda Reinstein, the president and co-founder of the nonprofit Asbestos Disease Awareness Organization, said in a statement about the import data.

"The EPA needs to ban asbestos with no exceptions," the ADAO president said. "There is no safe or controlled use of asbestos in mining or manufacturing."

Ken Cook, the president of the Environmental Working Group, suggested that chlorine makers could easily use materials other than asbestos.

"The chloralkali industry’s insistence on the continued use of deadly asbestos is reprehensible," he said in the same statement. "Meanwhile, we shut our eyes to the communities in Brazil and other asbestos-producing nations, where miners and their families are exposed to this killer."

The American Chemistry Council, a trade group that includes the chloralkali industry, didn’t immediately respond to a request for comment.

ADAO will be holding a congressional staff briefing next Tuesday to discuss increased asbestos imports and their potential impact on public health and the environment.