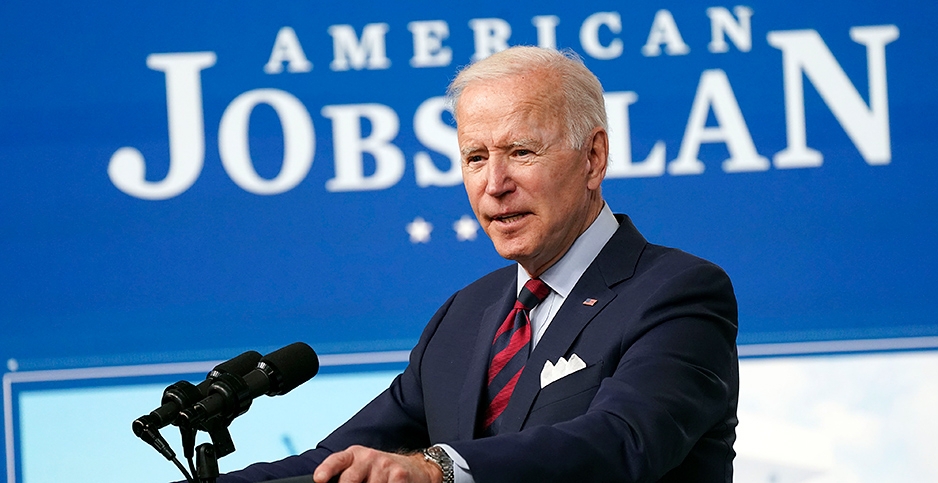 President Biden delivers remarks yesterday on his $2.3 trillion infrastructure proposal. He described it as a key part of his effort to combat climate change. Sipa USA/Newscom

President Biden confronted Republican hostility toward his $2.3 trillion infrastructure package yesterday by declaring it a pillar of his plan to address climate change.

"Investing in clean energy to fight the effects of climate change is part of infrastructure," Biden said in remarks aimed at pressuring political opponents to support his so-called American Jobs Plan.

His comments dovetailed with indications from White House advisers that the sprawling infrastructure proposal could be used as a cornerstone of the administration’s 2030 climate goals, which are widely expected by outside observers to seek a roughly 50% reduction in carbon emissions.

The construction package includes a clean electricity standard that aims to zero out power sector emissions by 2035. That measure and other provisions, like the purchase of electric vehicles by the federal government, could be used to convince other countries to announce stronger carbon commitments at Biden’s climate summit in two weeks.

White House deputy climate adviser Ali Zaidi suggested this week that the infrastructure proposal would help catapult the U.S. into a position of global leadership on climate change.

"We’ve taken robust climate action," Zaidi told Axios in a report published yesterday. "I think that’s being understood and received as a signal of this president’s commitment and credibility on the climate issue."

Leaders from 40 of the world’s heaviest-polluting countries have been invited by the administration to meet virtually April 22-23 to ramp up global climate ambition ahead of a U.N. summit in Glasgow, Scotland, later this year.

The administration hopes that each country will lay out renewed climate commitments at the meeting in two weeks, with the common goal of shifting the world economy away from its reliance on fossil fuels. Biden intends to use the event to showcase the U.S. as a world leader after the Trump administration walked away from the Paris climate agreement.

When announcing its goals for the summit last month, the White House used language that would later ring with similarity to its description of the infrastructure package. Both would create jobs by investing heavily in the clean energy industry.

The White House said it wants the summit to showcase "the economic benefits of climate action, with a strong emphasis on job creation, and the importance of ensuring all communities and workers benefit from the transition to a new clean energy economy."

Biden’s comments yesterday came as his infrastructure package is shrouded in uncertainty. It’s unclear if the narrowly divided Congress will pass the measure that so far has failed to attract Republican support or Democratic unity.

Among the challenges facing Biden is opposition in the 50-50 Senate from Sen. Joe Manchin (D-W.Va.), who famously shot a copy of a major climate bill with a rifle more than a decade ago for a campaign ad. Manchin has said he won’t accept a provision within the current measure that seeks to raise the corporate tax rate from 21% to 28%.

Manchin raised another obstacle yesterday by saying he opposes the use of reconciliation to pass the infrastructure package. That could force Senate Democrats to obtain 60 votes, rather than 50, for approval, all but ensuring its defeat.

Biden said yesterday that he was open to "good faith negotiations," including potentially on a lower corporate tax rate.

"I’m wide open, but we’ve got to pay for this," Biden said. "I am willing to negotiate that."

Biden’s best chance for passing some version of his infrastructure bill will be through the budget reconciliation process, which only requires 50 votes. Key pieces of his plan could be stripped out during negotiations with moderate Democrats who are more hesitant on climate policy and federal spending.

The Biden administration indicated that it will prevent global temperatures from rising more than 1.5 degrees Celsius. To meet that goal, the administration is expected to roll out other significant pieces of its climate agenda in the next two weeks.

That could include an executive order requiring a cut in methane emissions from oil and gas facilities, and the White House is already in talks with the industry to get buy-in from some of the biggest polluters.

But climate advocates are watching more closely for the upcoming announcement of the U.S. plan to cut carbon emissions at least in half by 2030. That commitment, called the nationally determined contribution, or NDC, under the Paris Agreement, will rely on some pieces of the infrastructure bill, such as hundreds of billions of dollars in investments to build out the nation’s clean energy portfolio and electric vehicle manufacturing.

The "backbone" of the infrastructure plan, as some advocates have referred to it, is the clean electricity standard requiring the U.S. to have a carbon-free power sector by 2035. That promises to feature prominently in the White House’s messaging to other countries at the April summit.

"We will not be open to doing nothing," Biden said yesterday. "Inaction is not an option."

Biden will need to come to the table with bold promises. But world leaders have learned to be skeptical of U.S. commitments on climate policy because of partisan politics around the issue, said Paul Bledsoe, a strategic adviser for the Progressive Policy Institute.

This won’t be the first time the U.S. has pledged bold action on the world stage, even as it faced an uncertain fate. Obama sold the world on his Clean Power Plan, which sought to cut power plant emissions, and regulations on car emissions. Both were rolled back by former President Trump.

World leaders know that the U.S. will have "wild gyrations" on climate policy, said Bledsoe, who also noted that powerful market signals are pushing the U.S. to decarbonize.

"Foreign nations will have some uncertainty, some skepticism about the ability of the U.S. economy to meet specific targets, and they should," Bledsoe said.

"We don’t live in a world of five-year plans," he said, "and the pace of decarbonization of the U.S. economy continues to accelerate, going faster in the last decade than it was in the first decade of the century, and there’s every reason to believe it will be faster in this decade."