U.S. is losing the solar race. Can big batteries help? 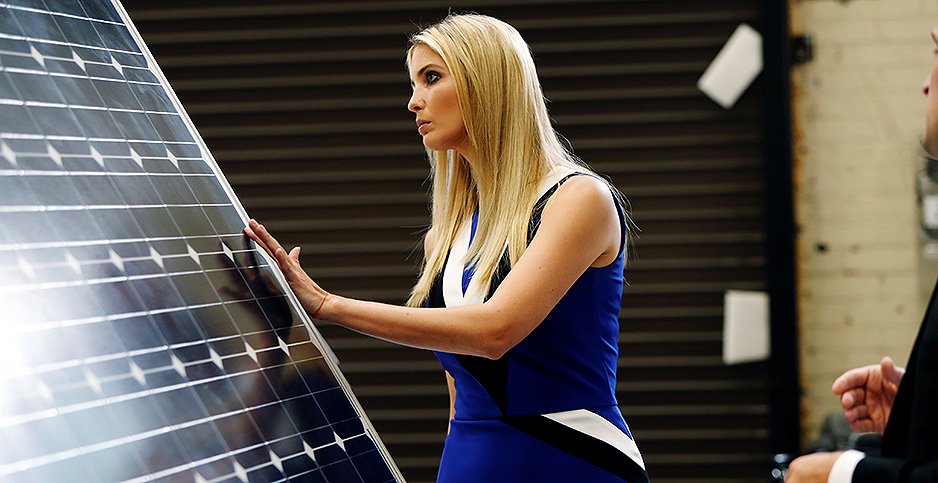 Ivanka Trump examines a solar panel during a tour of the Astrobotic Technology facility in Pittsburgh in 2018. Jason Cohn/Reuters/Newscom

Third in a three-part series. Read the other stories here and here.

It’s an open question how the United States fits into the booming future of solar energy growth. And it’s one that might interest the next president.

Sharply falling solar prices coupled with the near-dominance of Chinese companies among the globe’s largest makers of modules are reviving an issue that the U.S. has worried about for decades: Will it have energy independence in a world where another nation controls the market?

This time it’s not about oil, but electricity harvested from the sun.

The U.S. was first to demonstrate and develop solar energy back in the 1950s, and its solar companies led the world in what was a slow-growing market for almost five decades. That’s no longer true. When the industry boomed, U.S. firms were overtaken by competitors in China. Wyatt Metzger, a physicist and a principal scientist at the Department of Energy’s National Renewable Energy Laboratory, said the sudden growth spurt of the solar market raises issues that need to be addressed at a "very high level."

"One question is to what degree will which country own it and are we losing an opportunity by not investing more aggressively here," he explained in an interview. Noting that solar modules may last for up to 30 years, he pointed out that making them is a "huge job creator" for China. Maybe it could be for the U.S., too.

"I think a lot of people didn’t see this coming. There can be some catching up to do," he added. "Energy plays a big role in geopolitics. The question is do we want to invest in energy sources in the future?"

He and other scientists say the addition of large batteries that can store solar- and wind-produced energy promises to make renewable energy cheaper and more reliable in the future, hastening a reduction in the use of fossil fuels that produce greenhouse gases.

"Sunshine is not scarce," Nemet noted. If China decided for geopolitical reasons not to sell solar modules to the U.S., he argues that other countries could quickly fill the gap in solar modules. Japan and Europe are large producers.

"It wouldn’t be that hard to ramp up our own production or set it up in other places," Nemet said. "China would be hurting itself by limiting exports of solar panels. This is not the same type of issue we have had with other resources in the past."

Nemet is the author of a new book that tracks the rise of China’s booming solar industry: "How Solar Energy Became Cheap: A Model for Low-Carbon Innovation." He uses it in his classes to show that entrepreneurial innovation is one of the most promising areas in dealing with climate change.

"Students think we should have been working on this a few years ago," he said. "It’s helpful to see them get more engaged rather than feeling discouraged about the problem."

The last U.S. solar module maker among the top 10 global manufacturers is First Solar Inc., based in Tempe, Ariz. It ranked first place in 2009. Now it’s No. 10. In a subtle nod to its Chinese competitors, First Solar has styled itself as the "largest PV module manufacturer in the western hemisphere."

PV stands for photovoltaic materials, such as the silicon that is used by most makers. First Solar uses a thin film of two other PV materials, cadmium and telluride, coated between two sheets of glass to make electricity.

The technology, which was invented in Ohio, "allows us to grow around the globe," explained Michael Koralewski, vice president of operations for First Solar. He said the company’s modules deliver over 17% efficiency in making electricity and have "longer-term reliability than our competitors."

"What has to happen as [solar] prices continue to drop is that we have to improve our cost structure. In the past we have been very good at that," he said.

In October, First Solar, which manufactures some of its solar modules in Vietnam and Malaysia, underlined its bullish outlook by completing a second U.S. factory in Ohio. It says the Lake Township facility is part of a $1 billion investment and will result in 500 new jobs.

Many people in the rapidly changing global dialogue over solar energy argue that speed of innovation will be essential to cope with the advance of global warming.

Martin Green, an Australian scientist who has designed solar modules, predicts that if the rapid growth of solar continues, "you can really start cutting greenhouse gases" somewhere between 2024 and 2030.

But some elements of solar energy move faster than others. The pioneering use of large lithium-ion batteries to store the power looks promising to some utilities because it can defeat the "duck curve," which describes the overproduction of solar electricity during midday when it’s not needed. Then there’s a sudden falloff of solar in the evenings. That’s when consumers turn on their televisions and tweak up their air conditioning in sunny places like California.

Big utility-sized batteries can store excess solar electricity generated during the day for when it’s needed in the evenings. The combination of solar arrays and solar storage is among the factors that pushed California’s use of solar electricity to nearly 40% in March, a first.

The advance of storage batteries is following several years behind the evolution of solar modules. And the idea that some aspects of big battery development should not be hurried became apparent in April when there was a fire and explosion at the battery facility connected to a utility’s solar power array west of Phoenix.

It’s owned by Arizona’s largest electric company, Arizona Public Service Co. (APS), and had been operating for almost a year before the incident sent eight firefighters and a police officer to the hospital.

"There was absolutely no playbook," Scott Bordenkircher, director of technology innovation at APS, told reporters. The utility erected a giant tent and spent nine weeks carefully discharging and then examining the 364 modules in the battery. It found that one rack of them had melted into a column of aluminum.

The explosion apparently occurred later when first responders opened a door into the battery facility, letting in oxygen that ignited gases created by the fire.

AES Corp. is part owner of Fluence, the company that installed the batteries. The other owner is Siemens AG, the giant German energy technology company. According to John Zahurancik, the chief operating officer of Fluence, this was the first incident of its kind in 10 years of installing large battery systems.

Speaking this month at a conference on energy storage in Denver, Zahurancik said that experts are still trying to pinpoint the cause of the accident.

"This was out in the countryside near a substation without a lot of people around. We don’t see this as a general condition," he explained, noting that, so far, experts haven’t found any "broad errors."

"We see this incident as an unfortunate accident. It’s not the way we like to learn," he added. "You have to have an open conversation when it comes to safety."

South Korea, a pioneer in developing and using lithium-ion storage batteries, has had a much longer and rougher learning curve: 23 battery fires since 2017. According to Korean press accounts, investigators blamed poor-quality installations, faulty operating procedures and a lack of overall control systems. No company has been held accountable.

At the Denver energy storage conference, hosted by an affiliate of Wood Mackenzie, a U.S. consulting firm, Zahurancik said the Korean battery fires compounded the mystery by incinerating computers installed to keep track of unusual events.

He blamed the Korean fires on what he called "a gold rush mentality" by people and companies that wanted to "monetize" the benefits of solar storage. The South Koreans had "a lot of people working on lithium-ion batteries that hadn’t done that before," he said.

Several experts at the conference noted that interest in home solar storage batteries spiked in the U.S. this fall in the aftermath of major fires that prompted utilities in California to shut off power to millions of homeowners.

But many consumers are confused about what batteries can do.

"It’s important for people to understand that if there is a blackout, the standard home solar system will also be turned off," because it’s connected to the local power grid, said Martin DeBono, president of GAF Energy, a subsidiary of Standard Industries, a global roofing company that wants to blend more solar power with its roofing business.

DeBono predicted that more powerful batteries will emerge in the next three to five years that could handle the power needs of an entire home during an extended blackout.

"I am not a fan of lithium-ion batteries," added DeBono, a former Navy nuclear submarine officer. "There are better technologies on the near horizon."