U.S. isolated on loss and damage 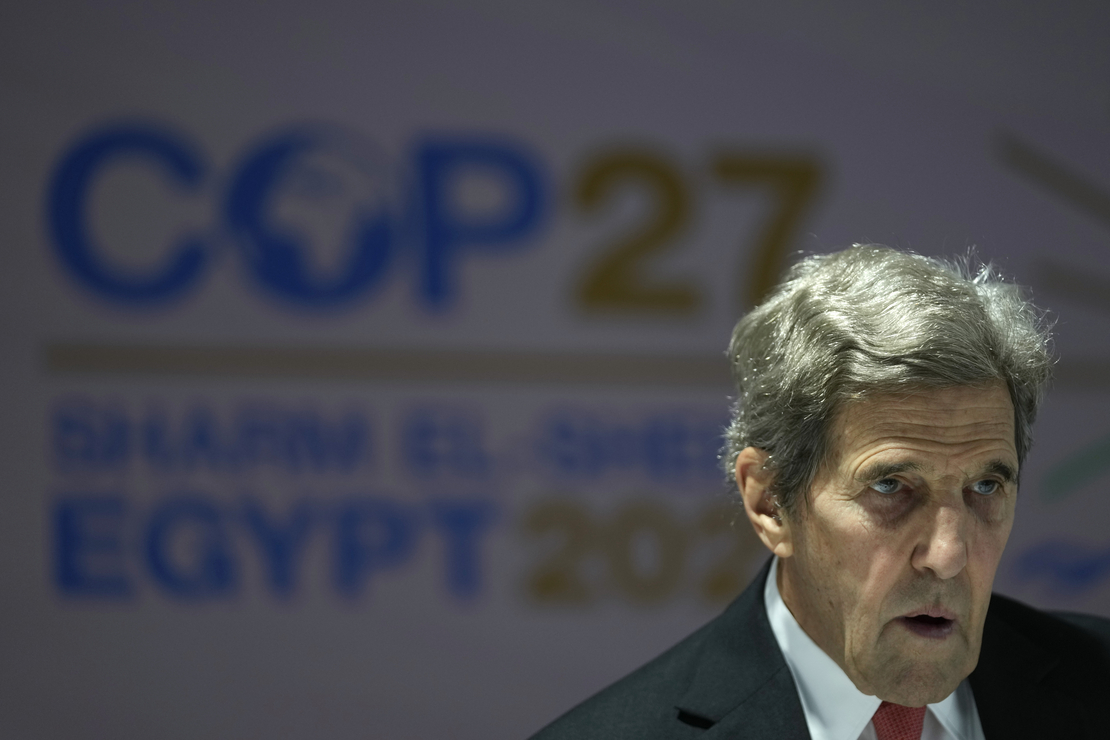 SHARM EL-SHEIKH, Egypt — The United States is now seen as the biggest obstacle to what poor countries want most out of these talks — a new fund dedicated to help them bounce back from climate disasters.

The overwhelming majority of countries at the U.N. climate conference that wraps up Friday in this eccentric and campy Red Sea resort town are demanding a new funding mechanism to help developing nations deal with climate damages that are now unavoidable. Divisions over that issue could prevent leaders from reaching a decision at the summit.

The determination of poor nations to break through a 30-year logjam on post-disaster support is heightened by the sheer number of catastrophes that have pummeled rich and poor countries alike in recent years — but which have hit the poorest ones hardest.

The U.S. delegation has refused to say plainly what its position is on the creation of a so-called loss and damage facility, which is a top ask for 134 of the 197 countries gathered at this meeting. Instead, the U.S. has asked for more time to study the idea and has suggested that disaster recovery should be handled through existing channels with missions like cutting pollution and preventing climate damage in advance.

It’s a position that to many here seems like foot-dragging from the country with the most wealth and the greatest historic responsibility for climate change.

The apparent isolation of the U.S. on the issue was thrown into starker relief Wednesday when the European Union, which has historically stood arm in arm with the U.S. against paying climate reparations, seemed to shift its stance.

European Commission Executive Vice President Frans Timmermans said at the talks here that it’s time for wealthy countries to “start delivering money to the most vulnerable.” He announced that the E.U. would back an agreement at this meeting that includes the creation of a new fund for reparations — as one option.

Timmermans told reporters that there is now daylight between the E.U. and the U.S., which he said remained “extremely reluctant as to a specific, dedicated instrument” on loss and damage. But it’s not clear how deep the divisions actually are. The U.S. has not ruled out eventually agreeing to a new funding mechanism, and the E.U. hasn’t committed to one.

Both parties say a decision on a new fund should be made in the future. Timmermans said last night that a decision would be ripe at next year’s climate talks in the United Arab Emirates, while the U.S. has not given a timeline.

U.S. climate envoy John Kerry told reporters over the weekend that the U.S. might be ready to agree to a new fund within months or a year of this meeting’s conclusion. But climate experts who have spoken to the U.S. delegation here say it still prefers a three-year process like the one set up at last year’s summit in Glasgow, Scotland, but with a commitment that a decision be made at the 2024 meeting.

But Timmermans’ announcement last night marked a significant change in tone. He said the E.U. would find more immediate ways of supporting countries that face irreparable harms from climate change. Pakistan illustrates those dangers after devastating floods this year killed 1,700 people and displaced millions, with cascading consequences for livelihoods, health and education.

The U.S. came to this meeting — known as COP 27 — with a list of small-bore finance announcements that wouldn’t require congressional action, and with a proposal for selling carbon offsets that has so far been unpopular. Its officials have shied away from labeling any of these as a response to “loss and damage.”

And while the U.S. allowed loss and damage finance to be added to the meeting’s formal agenda for the first time, it took the unusual step of demanding that a footnote be included to exclude the ideas of liability for historic emitters or compensation for countries affected by that pollution.

Developing countries agreed to those conditions.

“We want international cooperation to actually mobilize sufficient resources to help us address loss and damage,” said Mohamed Adow, director of Power Shift Africa. “If that comes to us without any requirement for the U.S. and other historic polluters assuming liability for the harms that they’re causing, vulnerable countries are not making it an issue.”

But the U.S. has angered officials in developing nations by continuing to cast doubt on the need for new funding for climate recovery. Kerry said over the weekend that the U.S. wants more information about how a loss and damage fund would operate and where the money would come from.

“Not a lot of people that I know want to sign off on something that’s not even yet fully defined,” he said, adding that a “whole bunch of countries” that burn coal should chip in, in a clear reference to China.

“Basically, what they told me is they can’t buy a pig in a poke,” said Alden Meyer, a senior fellow with E3G. He said the U.S. wants to understand the structure of a new funding facility and how it would interact with other institutions like the U.N. Green Climate Fund before agreeing to create one.

“The other fear I’m sure they have — they haven’t said this, but I can’t imagine they don’t have it — is that once you agree to set up a facility, just like with the Green Climate Fund, the next step is a pledging session,” said Meyer.

‘It’s not even funny’

If a new fund is agreed to in Sharm el-Sheikh and becomes a reality within two years — as developing countries hope — it won’t be long before rich countries are called upon to fill its coffers.

The United States has struggled to meet its existing commitments to the Green Climate Fund, which supports carbon reduction and adaptation in poor countries. Meyer said the U.S. wrote its first check to the fund in 2018, four years after former President Barack Obama announced a $3 billion commitment. And the U.S. remains well behind on its pledges. Congress last year approved only $1 billion for it. It’s unclear when the U.S. will make another contribution, given that Republicans will control the House in January.

If a new loss and damage fund goes live by 2024 the U.S. will likely be faced with the unfavorable prospect of turning in a subpar pledge or failing to deliver on an ambitious one.

“You know, the level of understanding that the world citizenry has of domestic U.S. politics — of Democrats and Republicans and Senator Manchin and what his role is — you’d be amazed,” said Saleemul Huq, director of the Bangladesh-based International Centre for Climate Change and Development, referring to Sen. Joe Manchin, a conservative Democrat from West Virginia who has often been the last hold-out on climate legislation. “But that can’t hold hostage the whole world. You’re just one country. You’re a big country, an important country, but you’re not the only country in the world. And so, you cannot hold up a global movement and agreement because of your own domestic policies and domestic constraints.”

Developing countries and their champions here agree that there is much left to be settled about the structure of the loss and damage facility and its place in what is being called the “mosaic” of international climate finance. But they say the same was true 12 years ago in Cancun when the world agreed to launch the Green Climate Fund for mitigation and adaptation.

Those details were filled in later, and the fund is now a mainstay of climate support for vulnerable countries.

It’s important to developing countries that a loss and damage fund exist under the umbrella of the U.N. climate process, which runs on consensus. That gives poor countries a say in its outcomes, especially when they band together. While many welcomed the introduction this week of the Global Shield climate insurance program to help countries after disasters, an ad hoc program directed by developed countries can play only a limited role in ensuring climate justice, say officials from developing nations.

“You know, it’s not even funny. The U.S. is always like 10 years behind the current reality,” said Harjeet Singh, head of global political strategy for Climate Action Network International and a veteran of this process. “When we were talking about adaptation, the U.S. wanted to talk about mitigation. Now, that we’re talking about loss and damage, you’re saying, ‘OK, now we have to talk about adaptation.’”

The Mexico talks in 2010 created an adaptation committee for the first time, but the U.S. pushed for the issue to be dealt with at a lower negotiating level within the process. Singh said he had intense discussions with the U.S. delegation in the years that followed about the importance of giving adaptation parity with global efforts to curb emissions.

Tuvalu Finance Minister Seve Paeniu said he met with Kerry’s team repeatedly before this conference to discuss the need for loss and damage. He described U.S. requests for further study “far-fetched.”

He said the answers that Kerry and his team are seeking about the level of need for a new funding facility and the adequacy of relying on current funding from the World Bank and elsewhere have been provided in successive U.N. reports.

Paeniu, whose country is currently sending rations of rainwater to its citizens because its groundwater is becoming salty from rising seas, said developed world leaders who visited Egypt last week filled their speeches with expressions of support for vulnerable countries.

“So it is really interesting that at the highest political level we hear countries really coming on board in supporting this concept of loss and damage funding arrangements, but then in the corridors and halls of the COP it is a different thing,” he said. “The technical people are saying different things. So, there is a disconnect, in my view.”