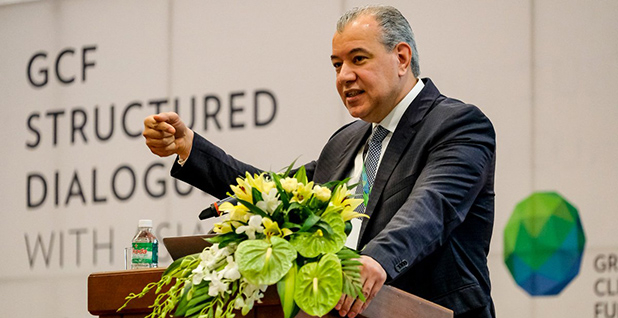 Saudi Arabia is coping with global outrage over its alleged role in the slaying of U.S.-based journalist Jamal Khashoggi, who was critical of the kingdom’s anti-democratic policies. Khashoggi is believed to have been killed in the Saudi Consulate in Istanbul earlier this month.

Riyadh, Saudi Arabia’s capital, didn’t stand in the way of the Paris climate agreement, she said, because former President Obama made it a personal priority to help deliver the global pledge. That changed with Trump’s arrival.

The synchronicities between the Trump administration and the desert kingdom aren’t hard to find. Both are determined to expand fossil fuels worldwide, despite mounting warnings by scientists that the window for climate action is shrinking.

At a Green Climate Fund meeting in Bahrain this weekend, as international outrage over the Khashoggi affair was reaching its zenith, Saudi board member Ayman Shasly challenged the U.N. fund’s opposition to fossil fuel projects. The group was meeting to identify projects to reduce emissions and to help nations adapt to rising temperatures.

Shasly, Saudi Arabia’s chief climate negotiator, hails from its state-owned petroleum company, Saudi Arabian Oil Co. He has shown a particular talent for hogging the microphone at U.N. gatherings in an effort to slow down proceedings, according to observers.

Earlier this month, countries gathered in Incheon, South Korea, to review the U.N. Intergovernmental Panel on Climate Change’s summary for policymakers. It’s the short version of a landmark report on the dangers of exceeding 1.5 degrees Celsius of warming. The report had an eye-popping message: The world must move strenuously to avoid overshooting 1.5 C by 2030.

Yet Shasly, who was representing the world’s top oil producer, offered edit after edit to blunt its message.

Shasly proposed edits that would have cast doubt on the science of warming. He defined climate change as a phenomenon that began in "preindustrial times," implying it isn’t man-made. He also said it’s "not feasible" to quickly end human-caused greenhouse gas emissions, and he highlighted the potential dangers of reducing carbon dioxide. The report’s authors accepted some edits and rejected others.

There were times when Saudi Arabia found partners. Shasly and the U.S. State Department delegation jointly suggested that the summary’s text be tweaked to "reflect both the benefits and risks of mitigation and adaptation in a balanced manner."

That edit wasn’t made.

Sources in the room say Saudi Arabia didn’t come to compromise. After more than 180 other countries had effectively signed off on the report as the meeting entered overtime Saturday, Saudi Arabia wouldn’t budge.

Approving the IPCC summary doesn’t mean accepting the science, as the United States would stress in its own statement. Yet Shasly and his team argued for alterations for two hours after a final draft was patched together. They relented only when it became clear that Saudi Arabia would be singled out in a footnote and the summary would move forward without it. A full list of their recusals will be attached to the meeting’s report when it’s released.

That’s unusual. So is the fact that Shasly — a senior Saudi climate negotiator whose title is listed by the GCF secretariat as "international policies consultant" to the Saudi agency that oversees its petroleum industry — attended what is styled as a technical meeting of scientists.

If Shasly’s tactics seem to come from an oil industry playbook, it’s because they do.

Leo Hickman of Carbon Brief first reported on Twitter early this month that a 2008 Saudi Aramco bulletin described Shasly as the company’s official in charge of investments in the Chinese province of Fujian. He also found that Khalid Abuleif, the country’s chief negotiator to the U.N. Framework Convention on Climate Change since 2012, listed his Saudi Aramco email as his contact on IPCC documents in 2007.

Shasly’s official biography with the Saudi government references "more than 25 years of experience in the private sector, mainly in energy supply, investment, and portfolio management."

The GCF regained its footing last week after a disastrous July meeting in Songdo, during which the fund failed to approve $1 billion in climate projects. The fund’s executive director abruptly quit amid the turmoil.

Over the weekend, the fund’s board approved new projects in 19 countries, and rich countries, excluding the United States and Australia, agreed to ready funding pledges to refill the GCF’s coffers next year.

An analysis of speaking times during the July meeting by an Oxford University observer showed that Shasly dominated floor time, along with representatives from Egypt and South Africa. Together, they spoke for as much time as the other 21 board members combined. Some observers say that’s by design: It appears to be another delay tactic by Saudi Arabia.

"It’s not clear, I think, to many, what is their ultimate objective," said David Levaï, the international climate governance lead with France-based IDDRI. "It cannot be to prevent developing countries from accessing the project that they’ve been asking and been waiting for. That would be to the detriment of their own group."

While Shasly was in Bahrain for last week’s GCF meeting, four of his colleagues from Saudi Arabia’s Ministry of Energy, Industry and Mineral Resources led the kingdom’s delegation in London talks to design a new agreement to halve greenhouse gas emissions from the shipping sector by 2050. An online search suggests at least two of the four — Ahmed Al Babtain and Salah Alghamdi — may previously have worked for Saudi Aramco.

"They became the Saudis’ best friends. It was almost like a love affair. And it remains so," Hemmings said.