U.S. lurches into a race with sprinting China 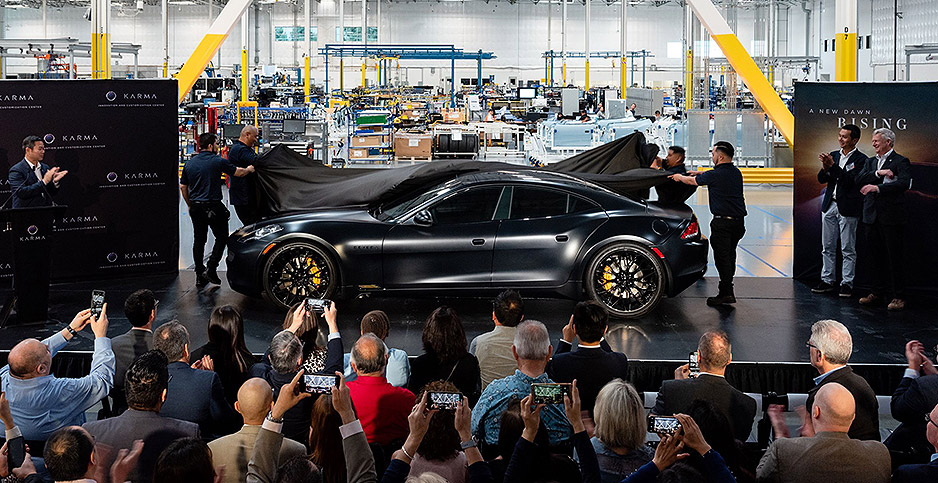 An electric car is unveiled at Karma Automotive's innovation and customization center in Moreno Valley, Calif. The Chinese-owned company opened the facility in April. Chine Nouvelle/Sipa/Newscom

The most ambitious plan to jump-start the United States’ sluggish movement toward electric vehicles was unveiled last month by Sen. Chuck Schumer (D-N.Y.), the minority leader. He proposed a $454 billion federal investment over 10 years to produce a fleet of "zero emission" cars by 2040.

Just as Henry Ford and other U.S. automakers spurred a global movement toward gasoline-powered cars in the early 1900s, the U.S. could repeat the feat with cars that run on electricity, Schumer asserted late last month.

"At the moment, we are not remotely on track to meet that target," he said. One way to do it, he added, is to enact a federal plan that offers "a large discount" to motorists who replace their gas-powered cars with American-made EVs.

Federal grants could provide another stimulus if they’re given to states and cities to build charging stations. U.S. automakers could be eligible for other grants that help them retool their factories to make better and cheaper EVs.

"But we have to move fast," Schumer said. "China now accounts for more than half of the world’s electric vehicle market; it overtook the United States as the world leader in 2015. If we don’t match the level of China’s commitment, we will miss an enormous opportunity." Schumer vowed to introduce his clean car measure a year from now if Democrats retake control of the Senate in the 2020 elections.

Earlier this year, the Congressional Research Service reported that "fast" movement is not the appropriate term to describe progress toward EVs in the United States. Federal tax credits providing incentives to buy EVs have been "largely unchanged" for almost a decade and have begun to fade during the Trump administration.

When the Trump administration called for deep budget cuts to federal research programs aimed at improving electric car batteries, Congress balked. Then the White House turned its attention to loosening fuel economy standards for gasoline-powered cars, another move that is headed in the wrong direction when it comes to curbing greenhouse gas emissions from conventional automobiles. Transportation is one of the fastest-growing causes of climate change and is now responsible for almost one-third of U.S. CO2 emissions.

Are you a Flintstone?

So what has kept the U.S. EV movement from stalling completely? According to a recent report by the liberal-leaning Center for American Progress, it has been a combination of incentives from California and other states, plus a whopping $2 billion contribution from Volkswagen AG, the German carmaker.

VW, as part of a 2015 settlement for cheating on U.S. pollution tests by using a "defeat device" to understate the emissions of diesel engines, negotiated an unprecedented deal with the Obama administration and the California Air Resources Board.

Threatened by prosecutors with the possibility of fines ranging from $17 billion to $34 billion, VW pleaded guilty and agreed to make a $2.8 billion settlement that included $2 billion to promote electric cars. That includes pushing for more government and private support for EVs and to help build a national charging system. The settlement money was used to create a promotion-oriented company, named "Electrify America," to achieve those goals. It was established in 2016 and is located in Washington’s Northern Virginia suburbs, not far from where Volkswagen Group of America has its U.S. headquarters.

"That’s a separate company from us," said Electrify America’s spokesman, Mike Moran, who explained that part of the agreement is that his company would be "brand neutral" so it could promote EVs of every manufacturer. By the end of 2021, he predicted, it will have built over 800 charging stations covering 45 states. Among them will be 3,500 individual chargers, some of which will be installed along two cross-country routes for EVs.

The company’s goal is to promote EVs to Americans as "zero emissions vehicles." According to its early surveys, that will take some work. One survey found that less than 50% of Americans had heard of a zero-emissions vehicle, and only about 34% of future car buyers had researched the prospect of buying one. EVs have been on U.S. roads since late 2010.

Electrify America has launched two national advertising campaigns. One used music borrowed from two American cartoons, "The Jetsons" and "The Flintstones." Two nearly identical cars with identical drivers pull up next to each other at a red light. The drivers recognize each other with shock and amazement, but the one driving an EV quickly recovers. As the light changes, he hits the accelerator, using his car’s more powerful torque to quietly put distance between them.

"When you’re behind the wheel, are you a Jetson or a Flintstone?" asks a narrator. "EVs are here today. They’re fast, quiet and fun to drive. Say goodbye to the Stone Age. Switch to an electric vehicle today."

The presence and the financial clout of Electrify America has created some new connections in the U.S. industry. They include a favorable refueling agreement between it and an emerging collection of Ford-built EVs and another with Harley-Davidson Inc., which is marketing an electric motorcycle called the LiveWire.

Perhaps the most intriguing connection was started with Greenlots, a Los Angeles-based startup that is building its own charging network. In January 2018, Electrify America bought an electronic management system for its charging network from Greenlots.

In January 2019, a subsidiary of Royal Dutch Shell PLC, one of the world’s largest oil companies, bought Greenlots, which issued a press release that explained: "With Shell we’ll intensify what we’re doing."

"Electric mobility is one of the solutions that will help meet growing demand for transport in a lower-carbon world, and we are exploring how to serve an increasing number of electric vehicle drivers," said a spokesperson for Shell.

The subsidiary, called Shell New Energies, is listed on Shell’s website as exploring sales of electricity as well as biofuels and hydrogen for fuel cell-driven electric cars.

Despite all this activity, the Center for American Progress predicted in its study that by 2025 there will still be a $2.3 billion gap in needed funding to build a U.S. charging system and that more money must come from states, utilities, private investors or the federal government.

Perhaps the biggest obstacle to public acceptance of EVs is their price. According to a recent study by McKinsey & Co., an international consulting firm, EVs can cost $12,000 more than a comparable-sized conventional car, and most American automakers don’t make a profit when they sell them.

The existing $7,500 income tax credit for buying an EV helps close the gap, but it has begun to phase out for companies that have sold more than 200,000 EVs. Both Tesla Inc. and General Motors Co. have reached that point.

There is legislation in the Senate to extend the subsidy, but it is challenged by a bill offered by Sen. John Barrasso (R-Wyo.), chairman of the Environment and Public Works Committee. He wants to end the credit. His efforts are supported by the editorial board of The Wall Street Journal, which regards the tax credit as an "income transfer for the well-to-do."

McKinsey & Co. estimates that automakers could reduce the cost of making EVs by between $5,700 to $7,100 per car by simplifying their designs and using dedicated platforms tailored to the characteristics of electricity-driven systems. The firm and others predict that continuing price reductions of the cars’ large electric batteries will also make them more competitive against conventional vehicles in the next few years.

"I think you will see that a lot of auto companies have aggressive plans to get further into the EV market," said Moran of Electrify America. "Most of those vehicles are coming in the 2020-to-2025 time frame."

He predicted that by then there will be a wider variety of models that can travel farther before recharging, and that recharging times will be comparable to refueling gasoline-powered cars.

The relative silence of the Trump administration on EVs while powerful states like California have plunged ahead has created a lopsided public charging network. California has 5,055 stations, almost five times more than the other leading states: Florida, Texas, Washington and New York. The median state has 234.

A key challenge is the U.S. Highway Trust Fund, which finances the maintenance of the national highway system. It is financed by a gasoline tax of 18 cents per gallon, which EV drivers don’t pay.

Eighteen states have approved additions to their annual registration fee for cars to cover EVs. A recent Consumer Reports study says that two-thirds of them are "punitive," charging EVs more than cars their size would have to pay in annual gasoline taxes.

There are at least 260 million vehicles on U.S. highways, and the 1 million EVs in current traffic don’t amount to much in terms of wear and tear on highways. But more fuel-efficient gasoline cars and increasing maintenance costs for highways have pushed the trust fund to near insolvency, raising pressure for contributions from EV owners.

While EV drivers already pay tolls, regular registration fees and taxes on the electricity they use, some states including Oregon are testing what may be a fairer approach: tax equivalent to the gasoline tax based on the annual mileage of EVs.

A study by the National Bureau of Economic Research estimates that the rise of EVs will create a $250 million annual gap in the Highway Trust Fund. That will grow as more EVs hit the road.

Some states have been working on the problem, including California, Washington, Oregon and Illinois, where there are proposals for a mileage tax on EVs.

But the absence of a federal solution will make Schumer’s dream of having a globally competitive and climate-friendly fleet of American-made EVs more problematic, while strengthening the arguments of critics like Barrasso.

"They ought to be pulling their own weight when it comes to the fact that repairs need to be done and those that use the roads ought to be paying for it," Barrasso has said.

Correction: An earlier version of the story erroneously identified the location of Electrify America’s office as Reston, Va. It’s located in Herndon, Va.