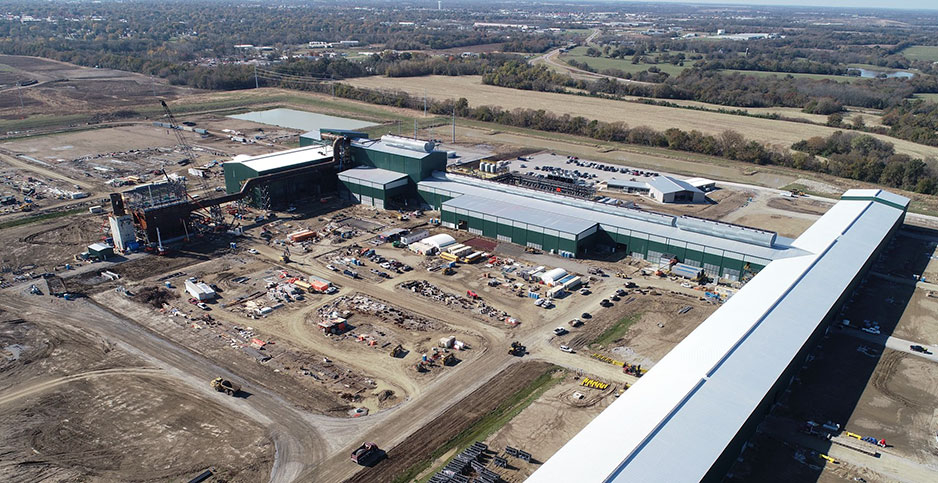 A Nucor Corp. "micro" mill being built in Sedalia, Mo., will be powered primarily by wind. Nucor Sedalia/Facebook

The Sedalia mill’s significance stretches beyond the state and represents the potential for greening the steel industry, which globally is a major source of carbon emissions, environmental advocates say. A report last year from the group Mighty Earth — "Cold Steel, Hot Climate" — noted that steel represented 7% of global carbon emissions worldwide in 2013, much of that from less efficient blast furnaces.

The plant, expected to be commissioned by year’s end, is one of the largest capital investments in the Show-Me State in years. It will employ more than 250 people and be powered through a 75-megawatt power purchase agreement between Nucor and Evergy, which is seeking regulatory approval for a special tariff to serve the plant.

To be sure, Nucor’s decision to build the plant in west-central Missouri was driven by more than access to wind.

But in testimony filed with the Missouri Public Service Commission, company officials said "access to a fixed, long-term, and competitive electric rate" was "critical" to the plant’s success.

The utility’s application to make use the special rate is still pending at the PSC.

Nucor will be Evergy’s largest Missouri customer when the plant begins operation. And the wind farm that will supply the plant, which has yet to be announced, will offset 100% of the mill’s electricity supply.

The Sedalia mill will still rely on fossil from the regional Southwest Power Pool bulk power grid when it can’t draw enough energy from wind on Evergy’s system. Even then, the plant will be supplied at least partly by renewables as the power supply in SPP increasingly becomes greener (Energywire, Nov. 6).

James Owen, executive director of advocacy group Renew Missouri, said the Sedalia project further confirms that intermittent energy sources, such as wind and solar, can play an increasing role in helping power Missouri’s economy while reducing emissions and making the state an attractive place to invest.

It’s an advantage the group, with assistance from the conservative R Street Institute, has sought to leverage with legislation that would enable companies to bypass utilities and contract directly with renewable energy developers.

So far, those policy efforts haven’t gone anywhere. But Owen and other renewable energy advocates are nonetheless pleased to see Nucor powering its plant with wind.

"We’d like to also see that direct access [to renewables] that is still lacking," Owen said. But "we think the utility companies are moving in a largely positive direction right now."

In its report, Mighty Earth said that 68% of U.S. steel, including all of Nucor’s production, uses more efficient electric arc furnace technology that, while consuming huge amounts of electricity, could yield significant climate benefits by switching to renewable energy.

"Switching to clean electricity for steel production is good for business and for the climate. Nucor cuts costs and reduces the embodied carbon in its steel; the state of Missouri leverages clean, cheap electricity to bring new jobs to the state," she said in an interview with E&E News, adding that it’s also a move that can be replicated across the country.

Even more broadly, the company’s CEO announced earlier this week during a conference in Stockholm that it will be the first globally to offer fossil-free steel by 2026 through an initiative to replace coal and coke, which are used as reduction agents in the steelmaking process, with fossil-free hydrogen gas.

Nucor’s presence has drawn other new companies to the area, such as steel mill service company TMS International and spinoff retail business such as a new truck stop. And another 1,000-acre site on the rail corridor is under option for a project that’s yet to be announced.