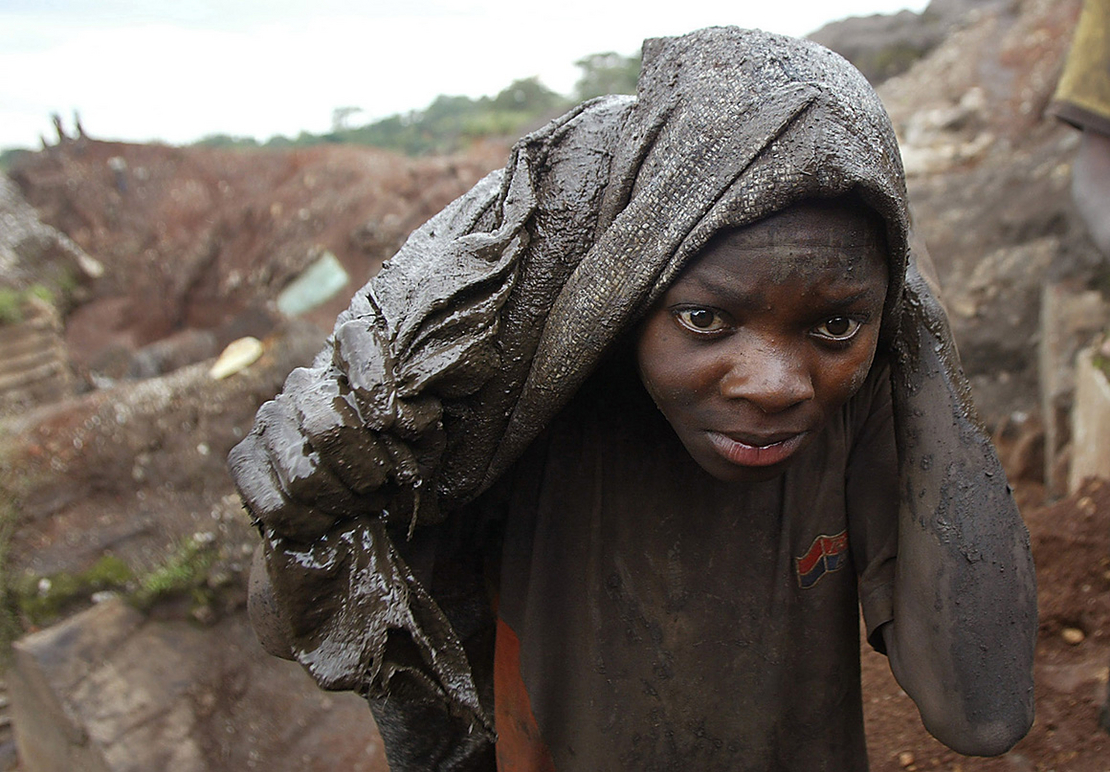 A young person carries wet cobalt on his back at the Shinkolobwe cobalt mine in Democratic Republic of Congo in 2004. AP Photo/Schalk van Zuydam

The Biden administration declared Tuesday that batteries from China may be tainted by child labor, a move that could upend the electric vehicle industry while giving fresh ammunition to critics of White House climate policies.

The Department of Labor said it would add lithium-ion batteries to a list of goods made with materials known to be produced with child or forced labor under a 2006 human trafficking law. The decision was based on many batteries using cobalt, a mineral largely mined in the Democratic Republic of Congo, where children have been found to work at some mining sites.

The department released the list in the form of a report that excoriated “clean energy” supply chains for using forced labor. It grouped Chinese batteries together with polysilicon — a key material used in solar panel cells — made in the Chinese province of Xinjiang.

About half the world’s polysilicon comes from Xinjiang but is banned from the United States due to concerns that it is produced by Uyghurs and other predominantly Muslim groups through forced labor. Solar ingots — the term used for blocks of processed polysilicon — as well as wafers, cells and modules were also added to the list of goods made with forced or child labor, since many of those goods are made using Xinjiang polysilicon.

“Clean energy is a central pillar of the Biden-Harris Administration’s policy goals. Yet, that clean energy future cannot — and will not — be built on the backs of forced laborers,” the Labor Department said in its report.

The criticisms aired by the department were similar to those levied by Republicans and allies of the fossil fuel industry against the Biden administration’s support for electric vehicles, centering on China’s dominance in the battery industry.

The Democratic Republic of Congo supplies more than 70 percent of the world’s mined cobalt, a metal used in batteries that provide power to anything from consumer laptops and cellphones to electric vehicles and energy storage facilities for power grids.

China, meanwhile, owns some of the largest cobalt mines in Congo and is the largest processor of the metal. There are no cobalt processing plants in the United States.

In 2016, Amnesty International, a human rights organization, published an investigation that found tens of thousands of Congolese children were working up to 12 hours a day at small cobalt mining sites across the country.

Eight years later, a large percentage of the cobalt mined in the DRC comes from mines “where thousands of children work in hazardous conditions,” the Labor Department said.

Auto companies are increasingly making EVs with lithium-iron phosphate batteries, which use no cobalt. But cobalt batteries may still make up some percentage of vehicles sold in the global market in the near term because of its unique properties, such as a higher energy density that can enable faster traveling speeds.

On paper, the department’s targeting of batteries would seem to be reason for applause from advocates for improving the situation in Congo who want the U.S. to take greater steps in advocating for better treatment of mine workers.

But Mark Dummett, a researcher at Amnesty International who helped expose that children were mining cobalt in Congo, was horrified by the Labor Department’s action.

Dummett said his concern lies in what he views as a toothless approach from the department. Unlike the full ban against solar panels from Xinjiang, the U.S. government list exists primarily for informational purposes and is “not intended to be punitive,” according to the department.

That means allies of the fossil fuel industry may now say the Biden administration is confident that “clean energy” relies on child labor but is doing little to deal with the problem.

“There is a danger with this labeling that it demonizes the EV industry, the battery industry,” Dummett said. “Anyone worried about the state of the planet should be alarmed by that.”

President Joe Biden has boosted U.S. battery manufacturing perhaps more than any president since the growth of modern consumer electronics through the recent Inflation Reduction Act, last year’s bipartisan infrastructure package and a swath of other federal financing programs.

But his administration has been mum on how it’s addressing risks within the supply chain for making batteries, including human rights issues near the mine sites where raw materials for batteries are originally gathered.

For example, the Energy Department in July finalized a $102 million loan to a subsidiary of Australian mining company Syrah Resources Ltd. to expand a graphite anode plant in Louisiana for electric vehicle batteries.

The graphite for the anodes will come entirely from Syrah’s Balama mine in a region of Mozambique where violent fighters linked to ISIS have fomented an international humanitarian crisis. Experts told E&E News that the U.S. financing could lead to dislocation that foments distrust that could be exploited by hostile actors (Greenwire, May 11).

Jigar Shah, head of the Department of Energy’s Loan Programs Office, expressed confidence in the company at the time, saying the company released “some of the best environmental, social and governance sort of reports in the mining world.”

However, DOE declined to say when it proposed the loan whether it included conditions that could help improve working conditions around the mine, something experts said would help reduce the odds of conflict breaking out.

The Biden administration formed a working group earlier this year to come up with proposals to deal with domestic mining and sourcing from foreign countries. The working group’s recommendations are not expected until after the midterm elections.

It’s unclear whether Biden has the political appetite to start banning batteries based on the minerals they use, as doing so could upend one of his biggest priorities: swift action to reduce greenhouse gas emissions.

Rachel Alpert, a former State Department adviser on human trafficking issues and current partner at Jenner & Block LLP, called the label and report a “warning sign” that customs agents may follow up with action.

“It puts companies on notice that they need to scrutinize these products,” Alpert said.

However, advocates for more action aren’t convinced the situation will change.

Terrence Collingsworth, an attorney who sued Tesla Inc. and major tech companies on behalf of families with children who were killed and injured in Congolese cobalt mines, said he doubts U.S. Customs and Border Protection (CBP) will act.

Collingsworth pointed to the agency’s reluctance to curb cocoa imports from Cote D’Ivoire in western Africa despite “overwhelming and undisputed” evidence of child labor. He petitioned the agency to act more than two years ago, he said, but “we still have heard nothing.”

“I have little faith in the CBP enforcement process when it comes to powerful multinationals,” said Collingsworth.

A CBP spokesperson did not say whether the agency would contemplate new enforcement steps in response to the Labor Department’s report, saying merely that it would “continue to use the resources at our disposal” to keep forced-labor goods from entering the U.S.

Any U.S. ban on cobalt imports could trigger a reshuffling of the global mining industry, raising prices and leading to more mines opening in North America over time, said Theo Yameogo, a mining analyst with consulting firm EY.

But it would not happen fast enough to avoid disrupting the switch away from fossil fuels, he said.

“I’m not certain that within two years, or even six years, we can rebuild an entire industry around battery metals within the U.S.,” he said.

The Labor Department declined to specify whether it recommended other government agencies take further action to curtail child labor in the battery supply chain.

In a written statement, department spokesperson Christine Feroli referred to the label and report as “research” and said the department is in “regular communication with other U.S. government agencies on its work” and provided advance notice of its findings to “relevant agencies.”

The Labor Department has also had “constructive engagement with the government of the Democratic Republic of the Congo” as part of “the Biden-Harris administration’s priority focus on labor rights,” Feroli said.

Department “staff work closely with their counterparts in other agencies to utilize this research across the full scope of relevant government authorities,” she said.

And major solar importers have reportedly had panel shipments impounded at the border (Energywire, Aug. 9).

Those moves have not fully satisfied many of the solar industry’s critics.

The Coalition for a Prosperous America, for instance, an advocate for domestic manufacturing and one of the most vociferous critics of U.S. solar trade groups, sent a letter to CBP in August asking it to blacklist ten additional Chinese solar-parts suppliers.

Nick Iacovella, a coalition spokesperson, said Tuesday that the Labor Department report “vindicates” the group’s position that clean energy “cannot be built on the backs of enslaved Uyghurs in China.”

Solar’s biggest trade group, the Solar Energy Industries Association, defended the industry’s progress on delinking from Xinjiang — something it called on members to do back in 2020.

“[T]oday, the U.S. solar supply chain is largely free of inputs from Xinjiang,” he said in a statement. Providing documentation of that, via a traceability standard, is “quickly becoming a minimum requirement for selling into the United States,” he added.

That same protocol could be put in place for the sources of cobalt in a lithium-ion battery, Smirnow said. Batteries are widely used as a storage device for solar power.

“As we have said, there is no place in the U.S. market for products made with forced labor,” Smirnow said.

While the Labor Department’s statements may not lead to immediate action, they create an opening for critics of electric vehicles and solar panels.

Republicans have drawn a line between abuses at polysilicon plants in Xinjiang and the broader energy transition.

Last month, 18 House Republicans wrote a letter to the Department of Homeland Security, expressing concerns about the origins of solar panels bought by the department and deployed in the U.S. Virgin Islands, whose Democratic governor has set a goal of running the entire grid off of solar power.

And some in the GOP have already started throwing grenades at the administration over China’s presence in the mining industry.

Biden’s handling of China and mining issues will face oversight from House Republicans if they win control in the coming midterm elections, Rep. James Comer (R-Ky.), the top Republican on the House Oversight and Reform Committee, said in a statement to E&E News.

Republicans want to focus on what involvement Biden’s son Hunter had in the 2016 sale of an industrial cobalt mine to a Chinese bidder, Comer said, as well as how “continued outsourcing of critical minerals production leaves American clean energy, manufacturing, and other sectors vulnerable to the actions of our adversaries.”

As of publication time, the White House had not responded to a request for comment sent Tuesday evening.

An investment firm co-founded by Hunter Biden in 2016 helped a Chinese mining conglomerate take control of a large Congolese cobalt mine from an American company, according to an investigation by The New York Times published last year.

It’s unclear whether Hunter Biden was directly involved with the deal, which happened while his father was still vice president. The White House has maintained that Joe Biden was unaware of the deal when it happened (E&E Daily, Jan. 21).

Yameogo, the mining analyst, said Republicans would not be meaningfully addressing human rights conditions and corruption issues in Congo around minerals if their efforts focused solely on China and Hunter Biden.

He noted the case of Glencore, a mining company based in Switzerland that mines large amounts of cobalt from Congo, which pleaded guilty in May to bribery and market manipulation schemes.

Unless actual policies come out of a potential GOP investigation, Yameogo said, “it’s just going to be a witch hunt.”