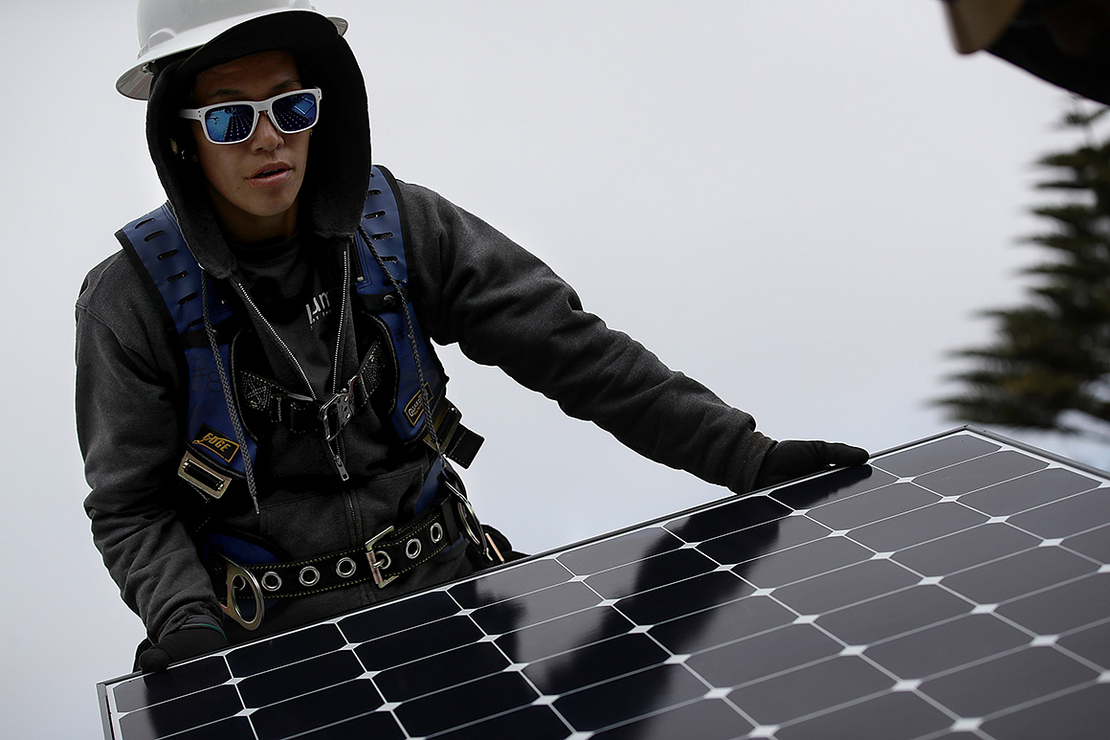 A solar installer moves a panel during installation on a roof in San Francisco. Justin Sullivan/Getty Images

The solar industry’s recent doomsday predictions gave way to unequivocal optimism yesterday after the Democratic climate bill cleared the Senate, even as other obstacles to expansion await the technology.

Leaders of the biggest solar trade group, the Solar Energy Industries Association (SEIA), said during a media call that the varied policy supports in the “Inflation Reduction Act” would have a “monumental” contribution to solar’s future if passed into law. They cited the bill’s many new or extended tax incentives for solar, including for power production, project investment and domestic manufacturing, among other benefits.

“These were provisions and policies and certainty that we have been advocating for and lobbying for the last decade,” said Abby Ross Hopper, SEIA’s CEO and president.

Still, the legislation’s many boosts to solar might not overcome other counterweights, such as ongoing supply shortages, allegations of forced labor, uncertainty about a federal probe on tariffs and lengthening queues for solar farms to get on the electric grid, according to observers.

Even so, Hopper predicted that the solar-manufacturing workforce in the U.S. would double as a result of the legislation. “I anticipate that we will see a number of groundbreakings and announcements right after this gets signed into law,” she said.

Numerous companies had told her that they were “waiting in the wings” to launch new U.S. production of solar equipment, if and when the bill was signed into law, she added.

“This is one of those moments where as a human being, I’ll remember where I was when the Senate passed it,” said Hopper.

Her remarks stood in contrast with the alarm bells rung again and again by solar advocates for much of Joe Biden’s presidency — a singularly tumultuous period when sky-high expectations met unexpected blows to the industry’s growth.

Just four months ago, Hopper told reporters that the industry was in the midst of “the most serious crisis we have faced in our collective history,” while unveiling a survey of SEIA members in which half of respondents claimed at least 80 percent of their 2022 project pipelines were at risk of delay or cancellation (Energywire, April 6).

By contrast, a Princeton University report last week concluded that the bill’s incentives could cause a fivefold increase in solar generation through 2025-2026, as compared to 2020 levels. That is higher than the growth rates envisioned by the Energy Department in one road map for a carbon-free grid, known as the Solar Futures Study (Energywire, Sept. 9, 2021).

The earlier crisis was blamed partly on a Commerce Department probe into new tariffs on solar equipment from four Southeast Asian countries that make up the bulk of imports. The probe was requested by California panel-maker Auxin Solar, which accuses Chinese manufacturers of undermining U.S. producers by exporting cut-rate panels from the four countries.

Commerce’s probe is ongoing, meaning new tariffs could eventually materialize. Those would hypothetically go into effect for solar importers at the end of a two-year forgiveness period established by Biden earlier this summer in an executive order (Energywire, June 7).

On yesterday’s media call, however, SEIA’s general counsel and vice president of market strategy, John Smirnow, said his group would continue to fight against tariffs, but that he believed a “critical mass” of U.S. manufacturers would emerge in the two-year interim period prior to any tariffs. Auxin Solar did not comment.

Solar’s recent tariff challenges were compounded by supply chain issues, inflation and new forced-labor policies that had led to confiscation of some panel shipments by U.S. border guards. And not every problem facing solar is destined to dissipate, even if the “Inflation Reduction Act” becomes law.

Sylvia Leyva Martinez, senior analyst in Wood Mackenzie’s power and renewables team, noted yesterday that forced-labor allegations in China were still resulting in impoundments by U.S. customs guards of some solar-product imports — something that has created uncertainty for foreign-based suppliers of equipment.

This year, her firm is still expecting about half as much utility-scale solar to come online in the U.S. — about 9 to 10 gigawatts — as compared with last year, largely due to the inability to secure solar equipment as well as the lingering effects of the Commerce probe, she said.

“My view that the impact of the ‘Inflation Reduction Act’ is going to be more after 2025-2026. In the short term, there are other items that need to be mitigated,” said Martinez.

“The [greenhouse gas] reductions forecasted here under IRA are highly contingent on siting and interconnecting massive, unprecedented volumes of solar (and wind) capacity, which *will not occur on its own* and requires major, ongoing, concerted effort on numerous levels,” he wrote in an Aug. 4 Twitter post.

Siting solar is something that is largely controlled by local and state governments, which have sometimes sought to restrict development in places ranging from New York to Kansas.

Developers may be likely to win over local communities by early-stage engagement, said Martinez. But developers’ struggles with long interconnection queues are likely to exacerbate over time, unless the Federal Energy Regulatory Commission undertakes reforms, she added.

“If we want the U.S. to fulfill its clean energy goals and to continue building clean energy projects at the rate we need to reach federal clean energy targets, it’s fundamental that changes in the interconnection process happen,” she said. “That would be the main challenge.”