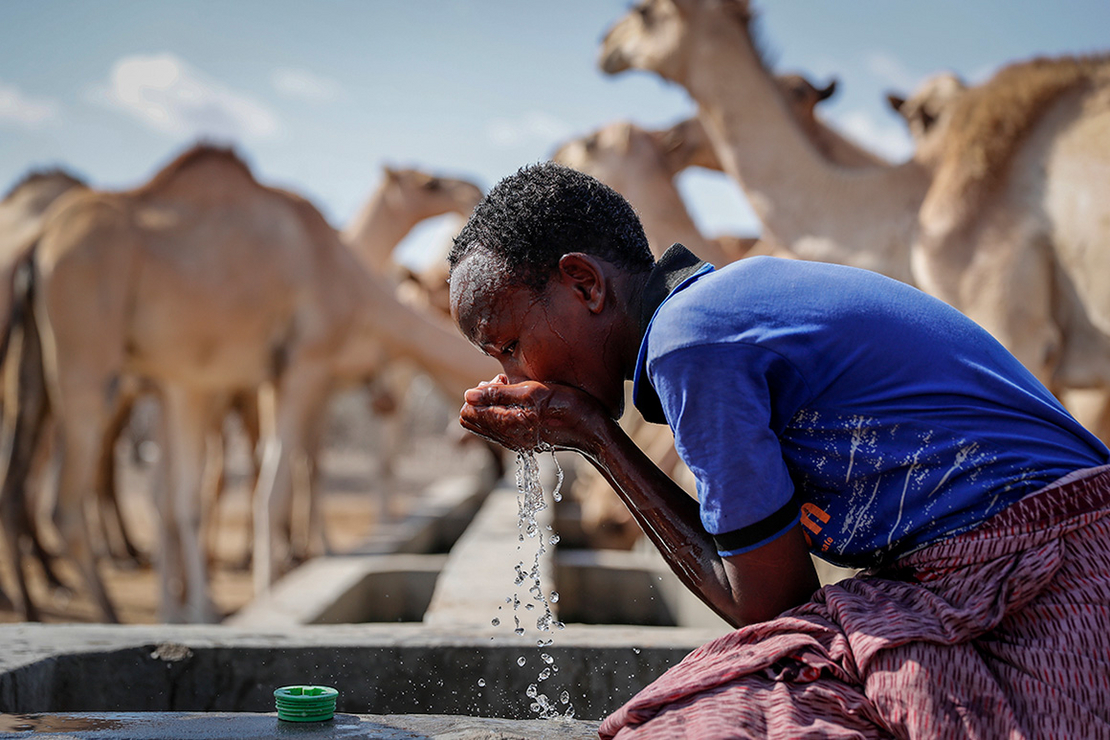 A boy drinks from a water point during a drought in the desert near Dertu, Kenya, in October. A spending package approved by Congress offers a fraction of the amount of international climate funding that was requested by President Biden last year. AP Photo/Brian Inganga

But the money Congress approved last week as part of its $1.5 trillion spending package falls far short of Biden’s vision. The setback will make it even harder for his administration to meet its pledge to boost climate finance and maintain its credibility as a climate leader in the eyes of the world, activists say.

“They’re pitifully too low. There is no way to spin it,” said Jake Schmidt, head of international programs at the Natural Resources Defense Council.

The final spending bill carves out roughly $1 billion for international climate finance — well below the $2.5 billion the president originally had requested, and even less than the House and Senate had recommended. An additional $500 million would go to biodiversity and wildlife trafficking programs.

Earlier finance requests had sent a positive signal ahead of U.N. climate negotiations in November that the United States was ready to deliver on a promise to quadruple climate spending from the last years of the Obama administration to $11.4 billion by 2024.

Instead, the final bill would increase fiscal 2022 spending by just $387 million over the last year of the Trump presidency.

“Congressional leaders just didn’t prioritize climate, despite a lot of rhetoric,” said Joe Thwaites, who works on international climate finance at the World Resources Institute. “They got people’s hopes up by putting such ambitious numbers forward and then traded it off.”

The full $1.5 trillion spending package would increase funding for domestic energy and environment programs, including boosts to EPA and the Energy and Interior departments. It also carves out funding for assistance to Ukraine. But the increases are below what Democrats had proposed and could limit some energy and environment efforts with climate legislation stalled indefinitely in the Senate (E&E Daily, March 11).

At a global level, U.S. investment in international development and climate has served as an important tool for Washington to maintain its relevance and influence in the world, Thwaites said. But its funding commitments have fallen behind what other wealthy countries are putting forward.

It’s also a critical part of ensuring that the United States contributes to an overdue commitment it made with other rich countries to provide developing nations with $100 billion a year in climate finance starting in 2020. Officials are now aiming to meet that amount by 2023 at the latest.

The spending package does include a boost to the Global Environment Facility, which invests in clean energy and adaptation projects in low-income countries. There are also modest increases to bilateral climate programs aimed at scaling up renewables and sustainability.

But it does not include a specific carve-out for the Green Climate Fund, a financing program that helps developing countries reduce their greenhouse gas emissions and adapt to climate impacts.

The last time the United States paid into that fund was under the Obama administration, which pledged $3 billion but only provided $1 billion before former President Trump halted payments. It remains $2 billion in arrears on a 2014 pledge to contribute $3 billion.

The spending bill also includes a $270 million increase for projects aimed at helping countries respond to the impacts of climate change. But to meet the $3 billion in adaptation finance Biden promised by 2024, that amount would have to grow by more than tenfold, said Thwaites.

The bulk of climate finance continues to go toward emissions-cutting activities, despite findings from a recent scientific report showing that adaptation is starkly underfunded, putting many parts of the world in peril (Climatewire, Feb. 28).

Overall, funding for state and foreign operations — which is where allocations for international climate efforts sit — would receive just a 1 percent boost, the smallest across all 12 spending bills, according to Thwaites.

The Biden administration is now preparing to release its funding request for fiscal 2023. Greens will be watching to see if it includes the boost needed to get U.S. climate spending back on track.

“The fact that this number fell short is an even stronger signal that they need to step up,” Schmidt said.