Udall could sail through the Senate — if Biden picks him 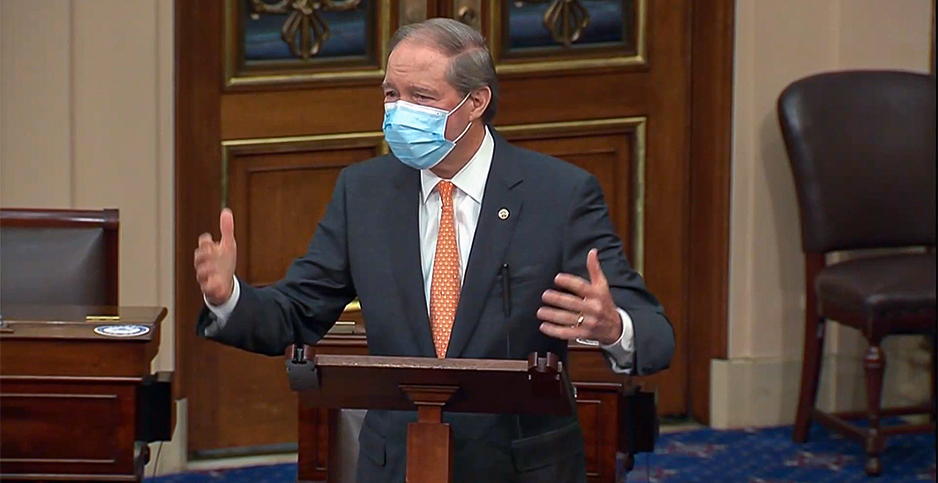 Retiring Sen. Tom Udall has only served in the chamber for two terms, or 12 years, a relatively short amount of time compared with many of his other colleagues.

But the New Mexico Democrat, 72, who spent 10 years in the House, was celebrated on the Senate floor yesterday by members of both parties as though he’d been on Capitol Hill for several decades.

It was exactly the type of farewell Udall might have hoped to receive as he remains under consideration to be President-elect Joe Biden’s Interior secretary.

Unlike some of Biden’s other nominees for Cabinet positions so far, who have elicited lackluster reactions among Senate Republicans, the celebration of Udall’s tenure yesterday morning left little doubt he would all but sail through the confirmation process.

Republican Sens. Mike Lee of Utah and John Barrasso of Wyoming are Western conservatives whose wariness of expanding federal landownership will make them critical voices in their party on whomever Biden nominates to lead Interior.

In floor speeches yesterday, the two lawmakers signaled that Udall has fostered the type of bipartisan goodwill that could go a long way.

"We’re from similar parts of the country, from some of the same ancestral pioneer stock," said Lee, who happens to be Udall’s second cousin.

"We have very different ideas, and yet you, Tom Udall, have always been someone with whom I’ve been able to communicate freely and frankly, and from whom I’ve always had positive, uplifting communication, even when we disagree."

Barrasso, who thanked Udall for their years of collaboration on the Senate Indian Affairs Committee, referred to the Udall family’s long tradition of public service and environmental leadership.

"If you go to the Interior Department office," Barrasso said, "you will see it is the Udall name on the building, because of this ongoing commitment and love that the senator has spoken about."

Senate Democrats have kept quiet so far about whom they’d like to see Biden nominate for Interior, as the short list for the job includes at least two other New Mexico Democrats currently in Congress, Sen. Martin Heinrich and Rep. Deb Haaland.

Haaland in particular has benefited from an aggressive lobbying campaign on her behalf from House Democrats, with Natural Resources Chairman Raúl Grijalva (D-Ariz.) leading the push to have her nominated for the secretary position (E&E Daily, Nov. 20).

But Senate Democrats made it clear during floor speeches yesterday that Tom Udall was not only respected in their caucus but beloved, and that, should he get the job offer, they would be unrelenting in defending his right to be confirmed.

"Tom will leave this chamber as a supremely accomplished legislator, a fierce defender of the environment and true champion of the American West," said Senate Minority Leader Chuck Schumer (D-N.Y.).

Schumer added that Udall is "practical as well as principled," a "visionary but also a doer," and "unendingly civil, decent and kind."

Senate Minority Whip Dick Durbin, an Illinois Democrat, likewise gushed at the conclusion of his laudatory remarks about Udall.

"I know you’re not leaving public service; you never will. You’re just leaving this chapter," Durbin said, adding: "I wish you the best, because you are the best."

Heinrich recalled how Udall persuaded ex-Interior Secretary Ryan Zinke, during a horseback riding excursion, to agree to open up the Sabinoso Wilderness to the public.

"This is one example from Sen. Udall’s long career of how he can bring people together, even those who have major disagreements," Heinrich said, adding that Udall "accomplished what months of contested congressional hearings and office phone calls here in Washington could not."

‘As I return home to the West’

Though Udall has been seen as making a strong play to win the Interior nomination — even confirming to E&E News last month that he was on Biden’s "short list" — his farewell address yesterday was more reflective than it was forward-looking, quipping that if people wanted to hear a highlight reel of his accomplishments, they should consult his Twitter account.

Udall did, however, recall some of his proudest achievements, like passage of the Great American Outdoors Act, which fully and permanently funded the Land and Water Conservation Fund, which Stewart Udall helped create.

He harked back, as well, to his unlikely partnership with former Republican Sen. David Vitter of Louisiana to pass landmark reforms to the Toxic Substances Control Act. He addressed similar issues during a recent interview with E&E News (E&E Daily, Nov. 18).

Wearing a blue surgical mask throughout the entirety of his remarks in adherence to COVID-19 pandemic safety protocols, Udall waxed poetic about his upbringing in the West, which taught him to love the land and informed the commitment to environmental protection that has characterized his congressional career.

He thanked Sen. Lisa Murkowski (R-Alaska), chairwoman of the Senate Interior and Environment Appropriations Subcommittee, of which he is the ranking member, for being "the best partner he could ask for in this work" to secure "resources for our public lands and environmental protections on a bipartisan basis, in the face of massive proposed cuts."

Udall added, "And we held off anti-environmental riders that had no place in these bills."

A large portion of Udall’s farewell address — like other recent ones — was devoted to bemoaning the state of the Senate, namely the institution’s political polarization and the abuse of the filibuster.

He spoke of how hard it will be to break the cycle of partisanship that has made legislating nearly impossible. But he concluded with a glimmer of hope.

"We should never forget that we can do — all of us can do — the impossible, when we open our eyes to the challenge and work together to meet it," Udall said.

"So, as I return home to the West, I am cleared-eyed, even troubled by, how far our destination is, but I am optimistic that we will get there like we always have."