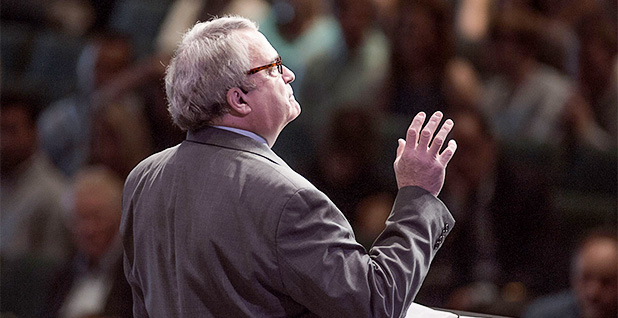 Pruitt’s future is uncertain following his exit from EPA last week. A stream of allegations, including the misuse of taxpayer money and improperly using his position for personal gain, have tarnished his reputation.

That’s a steep political fall for an agency chief who was widely viewed as an up-and-comer in the Republican Party and whose sights were thought to be set on a Senate seat or, perhaps, even a presidential bid.

Pruitt’s friends at home have watched it all with dismay.

Days before Pruitt’s resignation, Nick Garland, pastor of the First Baptist Church of Broken Arrow — where Pruitt and his family have been going for decades — organized a letter-writing campaign with other well-wishers. The encouraging messages were meant to boost Pruitt’s spirits and ask "God to bless him." Garland lamented then that "ugly people" had been trying to damage Pruitt’s reputation.

So Garland, 66, wasn’t entirely surprised when he got word later in the week that Pruitt was stepping down.

"Obviously, you can’t just keep getting pounded and not take a toll," Garland said by phone Saturday. "You’re never expecting that announcement. You know it’s coming, but you’re not ready."

At the church, there’s a group of men who regularly pray for Pruitt, he said. One of them heard from Pruitt directly that he was leaving the job and emailed the others. "Our group had gotten word from Scott that he was about to do that, so he emailed us and just said get ready, so we kind of knew," Garland said.

Pruitt wasn’t in church a week ago Sunday to hear Garland’s sermon (1 John 2:15), in which he talked about people living away from God’s plan and indulging in "violence, vulgarity and vile pleasures." Garland chided an "aversion to spiritual things and an undue concern for the external and the worldly."

Pruitt’s absence was easy to see. He often sits in the same spot near the front and brings a noticeable security detail, according to several church members. (Pruitt’s unprecedented 24/7 security detail was fodder for his critics.)

In the hallway after the early service, Pruitt’s friends were wary about talking to a reporter from out of town. "Be nice" when writing about him, one person cautioned.

"Scott’s a good man who is being treated unfairly," said Tim Wise, who’s been going to the church for about 20 years. Those attacking Pruitt are "worshiping the environment instead of worshiping God," he said.

"We love him," said Peggy Miller, who said she planned to write Pruitt a letter of support. She didn’t know what to believe when it comes to news reporting on Pruitt. "We have to believe the Scott Pruitt we know."

Her husband, Dan Miller, heard through a mutual friend that President Trump had asked Pruitt to set up a secure phone line in his office so he could take calls from the White House. Pruitt also took flak for the hefty price tag of his soundproof phone booth. But Pruitt couldn’t publicly pin that back on Trump, Miller lamented.

First Baptist, located in a Tulsa suburb, has long been central to the lives of Pruitt and his family. He was a deacon at the church and was also on the board of trustees at the Southern Baptist Theological Seminary in Louisville, Ky. His wife, Marlyn, volunteered in the church’s preschool area. But they hadn’t been back much lately, particularly after Pruitt came under fire for his taxpayer-financed travel to Tulsa.

His friends there have seen how the controversies stung Pruitt and his family.

"Sooner or later, anybody begins to hurt because you think, ‘Wait a minute, I came up here to do this. All this stuff in the press isn’t about what I’m doing, it’s about me as a person,’" Garland said.

Some of the allegations have involved Marlyn and their daughter, McKenna. Pruitt tried to secure a Chick-fil-A franchise for his wife back home in Tulsa, and EPA aides were asked to help Pruitt’s daughter score a competitive White House internship.

"Families used to be off-base, you don’t touch them. That day’s gone," Garland said. "No woman wants to see the man she loves hung out to dry, and so it does take a toll."

Now, Pruitt and his family might be heading back to Oklahoma for good.

It’s unclear whether he wants to run for office — or if he could win. His potential political opponents would certainly attempt to use his scandals against him, but some have suggested that the left’s fury could help Pruitt in the deep red state.

Days before his resignation, Pruitt’s name drew scowls in some Oklahoma coffee shops, public parks and grocery stores. Other Oklahomans had never heard of him. Some were vaguely aware of the scandals but weren’t tracking them closely.

At Mom’s Family Diner #2, a greasy spoon less than a mile from First Baptist, a fleet of waitresses served up massive omelets, biscuits drowned in white gravy and a dish called the Cowboy Skillet to an after-church crowd on Sunday morning.

"I don’t know who he is," one waitress said when asked about Pruitt. The hostess was similarly perplexed.

Tom Baraga, 56, who lives in Collinsville, Okla., was in downtown Tulsa at Guthrie Green last week for a Fourth of July film screening. He’s a Republican and a Trump supporter. He said he was somewhat aware of the allegations surrounding Pruitt, but he’d do more investigating before deciding whether to back him for elected office.

Early last week, Pruitt was publicly confronted in Washington by a teacher who held her 2-year-old son as she urged the EPA boss to resign. Pruitt might face anger from critics back home, too.

John Gibbens, who works at The Goods Bodega, a grocery store in Tulsa’s Arts District, said stories like Pruitt’s use of taxpayer money to finance his travel are "frustrating." Gibbens said he disagrees with the EPA chief on policy, too. "I don’t think there should be lead in water," he said last week.

But in church, Pruitt can expect to be welcomed back with open arms.

"The church is always just like the public: There are some that hold opinions on one side and some on the other," Garland said.

"But overall, the people here love Scott, we treat him as one of us, not his latest political decision or his latest news report. So really, he’s coming home to friends and to people that’ll love on him and rejoice that he’s back and compliment him on what was done well and grieve with him for the things that were said that wounded him," Garland said.