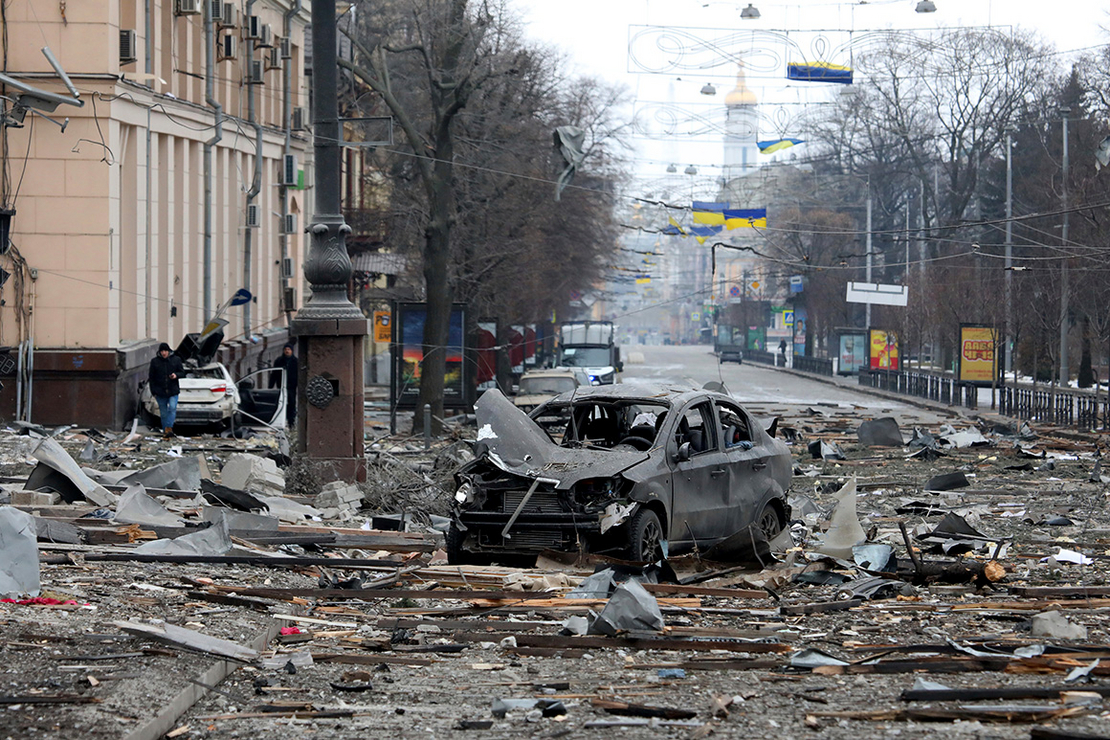 A burnt-out car and rubble in Kharkiv, Ukraine, caused by a missile launched by Russian invaders. The Kharkiv area is one of two regions where Russia took over natural gas compressor stations this week. Vyacheslav Madiyevskyy/Ukrinform/NurPhoto via AP

One of the chief economic fears of Europeans otherwise out of harm’s way from Russia’s invasion of Ukraine is that natural gas supplies could be cut off to large sections of the continent.

The conflict lurched in that direction yesterday when Russian troops seized two pipeline compressor stations along a major export pipeline that runs through Ukraine. In statements, Russian and Ukrainian officials pledged to keep gas flowing. But each sought to blame the other in the event of disruptions.

“The company emphasizes that interference in the technological processes of the [gas transmission system] creates significant risks to the safety of continuous gas transportation to consumers in Ukraine and Europe,” the country’s gas provider, Gas Transmission System Operator of Ukraine LLC (GTSOU), said in a statement on its website.

The statement indicated that the seizure could “lead to a technological catastrophe in the region.”

The invasion and bombardment have already deprived hundreds of thousands of people of gas amid freezing temperatures. GTSOU says 35 gas distribution stations have been shut down “due to the military aggression” of Russia. Kyiv and the Donetsk region have been affected the most, according to the company, which said about a million people have been left without gas.

According to weather.com, temperatures reached 17 degrees Fahrenheit yesterday in Kyiv.

Russia provides about 40 percent of Europe’s gas, and about one-third of that gets there through Ukraine. A sudden cutoff of Russian gas for whatever reason could be catastrophic for Europe.

Russia appears to be focusing on cutting off gas supplies to Ukrainians rather than cutting off supply to Europe, said Gabriel Collins, a fellow at Rice University’s Baker Institute for Public Policy.

“My understanding is that at least for the time being, Russian forces are focused on disrupting gas supplies to Ukrainian cities and consumers but are not physically interdicting the westbound trunk pipelines,” Collins said.

The compressor stations seized were in eastern Ukraine — one in Novopskov about 20 miles from the Russian border and another in Kupyansk, about 75 miles east of the Kharkiv region.

The Novopskov station is on the Soyuz transmission line that carries large volumes of gas from Russia across Ukraine to Europe, and accounts for nearly a third of the Russian gas that crosses Ukraine, Tom Marzec-Manser, head of gas analytics at Independent Commodity Intelligence Services, stated on Twitter.

Russian Deputy Energy Minister Pavel Sorokin sought to point blame at Ukraine should flows get disrupted. Bloomberg reported that Sorokin put out a statement saying that “any disruptions or provocations” at stations still controlled by Ukraine would be that country’s responsibility. The Ukrainian company rejected that.

“Our intention is to continue gas flows, as we have proven over the last 2 weeks since #PutinWarCrimes began,” GTSOU stated on its official Twitter account. “If there’re any interruptions/shortages of gas in Europe, please explain to your constituents who is at fault.”

A senior Russian official threatened this week in a televised address to cut gas supplies to Europe via Nord Stream 1, which runs under the Baltic Sea, in the wake of sanctions related to Ukraine.

Since the invasion, European officials have scrambled to diversify their energy supply.

Gas exporters in the United States are running at maximum capacity right now and sending a lot of gas to Europe. The Center for Liquefied Natural Gas, an industry trade group, said Europe in February received almost 70 percent of all LNG exported from the United States.

But the companies say they can ramp up production in the years ahead to help the continent wean itself from Russian gas (Energywire, March 9).

Germany has signaled an increased interest in importing gas by sea, moving to speed the construction of two gas import terminals. European Commission officials have said they can reduce the E.U.’s need for Russian gas by two-thirds before the end of the year with measures including speeding up renewable energy development and diversifying natural gas supplies.