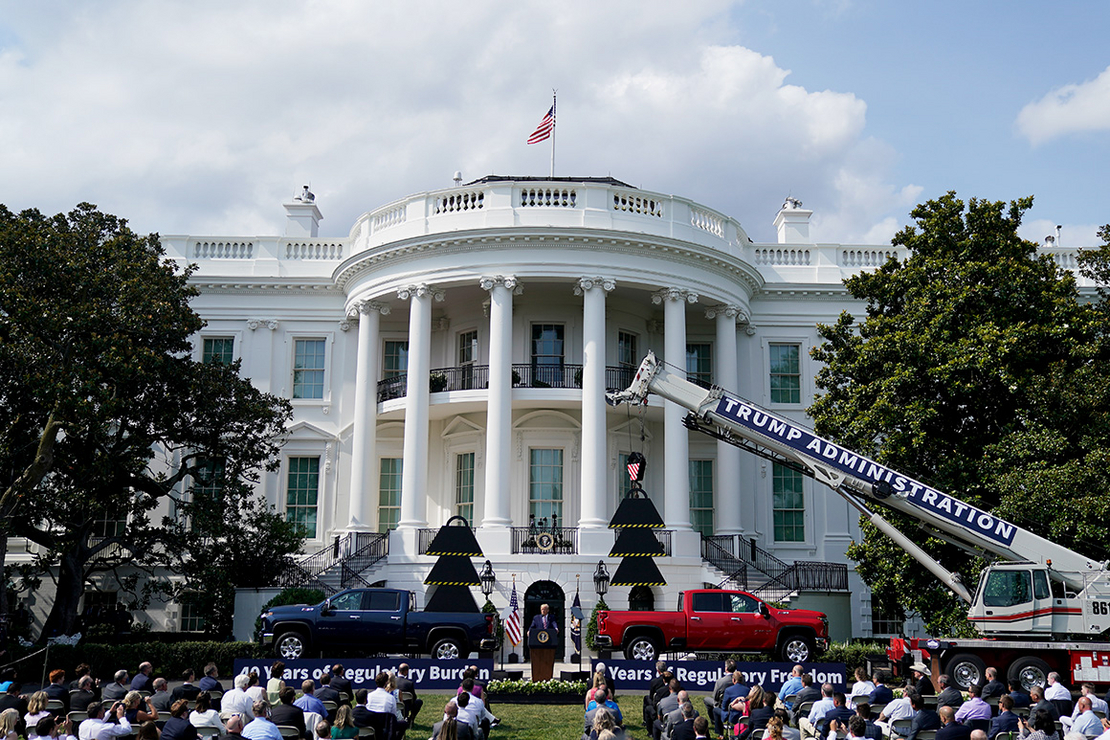 Former President Trump speaking on July 16, 2020, on the South Lawn of the White House, where he announced a rollback of the National Environmental Policy Act. Activists are becoming impatient with the pace of President Biden’s efforts to unwind Trump’s NEPA policies. Drew Angerer/Getty Images

The Biden White House recently acted to defang one of President Trump’s signature environmental actions, but the former president’s legacy may endure in what some activists call "an era of confusion" on environmental reviews.

This month, the Council on Environmental Quality advanced what will become a three-step plan to revamp the 2020 changes to National Environmental Policy Act rules. CEQ rarely conducts environmental reviews itself; rather, the council coordinates action across dozens federal agencies.

“We are moving ahead to restore certainty to the environmental review process, and to help make sure that things get built right the first time,” a CEQ spokesperson said in an email.

But some environmentalists are growing impatient with the pace. They say some projects in the pipeline could still be subject to Trump’s rules, and that this contradicts President Biden’s promise to reduce the country’s reliance on fossil fuels. Companies, for their part, are worried about regulatory chaos.

“The concern is how long is this going to drag on for,” said Kym Hunter, an attorney at the Southern Environmental Law Center, which is suing the government over the Trump rules.

The NEPA rules help guide agencies on environmental review for some of the nation’s biggest projects, like highways, bridges and electric transmission lines. Biden officials say they have been scrutinizing and started reworking the Trump changes, finalized in 2020, which sought to fast-track environmental analysis of major infrastructure in a quest for “energy dominance" (E&E News PM, July 15, 2020).

Those changes reduced review times, cut page counts, limited public input and expanded projects that could be excluded entirely from NEPA review. At the time, industry lauded the changes, saying they increased “transparency” and “clarity” for financial backers.

But now all of it is up in the air.

So far, the Biden administration has laid out a three-step plan to overhaul the Trump regulations, and earlier this summer, CEQ Chair Brenda Mallory said at a web event that “we are working as fast as possible.”

CEQ advanced the first step earlier this month, when it sent to the White House Office of Information and Regulatory Affairs a proposal that would make a “narrow set of changes” to the Trump rules.

Specifically, the phase one proposal “aims to fix some of the most critical problems with the previous administration’s environmental review process that are causing legal vulnerabilities and confusion for pressing infrastructure, resilience, and land management projects,” a spokesperson said in an email.

Neither environmentalists nor industry advocates said they know exactly what to expect.

“We have a sense for where they want to be knowing where Brenda Mallory came from, but we don’t know the exact details of what is in the package,” said Chad Whiteman, vice president for environment and regulatory affairs at the U.S. Chamber of Commerce.. Mallory, whose background includes CEQ and EPA, most recently worked at the Southern Environmental Law Center, the firm suing the government to nullify the Trump rules as soon as possible.

A group of industry representatives with the Unlock American Investment coalition has scheduled a meeting in a few weeks at OIRA, he noted. And green groups will have their own meetings.

In another step, CEQ has extended a deadline by two years to 2023 for agencies to actually comply with procedural requirements mandated by the Trump regulations (Greenwire, June 28).

In practice, that means regulators at the Interior Department are applying the Trump regulations as required by law, according to the department. But if they are merely supplementing a previously prepared NEPA analysis, they will follow guidelines available for decades before Trump.

If that sounds confusing, it’s because it is, say environmentalists and industry advocates.

“If folks are in the midst of their process, this creates a lot of uncertainty for them,” Whiteman said.

Hunter agreed: “I think it’s very confusing. You have one set of rules on the books. You have the Biden administration saying those rules are improper and at odds with their agenda, and then you have this phase one rulemaking coming out.”

It could easily be another six months before phase one is finalized, she added. “It’s my understanding it’ll change a few things but not everything,” she said. “The world is not going to stand still in the interim.”

Environmentalists like Hunter have been scouring government databases to find new projects that will be subject to the weaker Trump NEPA rules. It’s a thankless and imperfect task, and so far, few examples exist because there are not that many projects that trigger full NEPA reviews, also known as environmental impact statements.

“It is unclear how much the Trump regs are being used or how much [the Biden administration is] using their own regs and avoiding the changes,” added Brett Hartl, government affairs director at the Center for Biological Diversity.

One current project subject to the Trump rules is reauthorization for the R.L. Harris Dam, a hydroelectric dam in Randolph County, Ala. Alabama Power in June urged the Federal Energy Regulatory Commission not to study cumulative impacts in its environmental review.

The Trump administration’s 2020 regulations famously nixed “cumulative impacts” from environmental impact statements. Cumulative impacts are commonly discussed in the context of climate implications, but can apply to water and air pollution, too.

In another example, Hunter pointed to an environmental impact statement for changes to a plan to reduce injury and mortality of large whales in commercial and gill net fisheries. The proposal notes that the right whale population is as low as it has been in decades and that environmental laws require agencies to come up with mitigation plans.

This particular proposal has to comply with other statutes like the Endangered Species Act, so it’s less of a concern than projects and permits that are only subject to NEPA, Hartl said. Still, it demonstrates how agency planners are expressly referencing and following the Trump changes.