Uncertainty on reconciliation as House returns 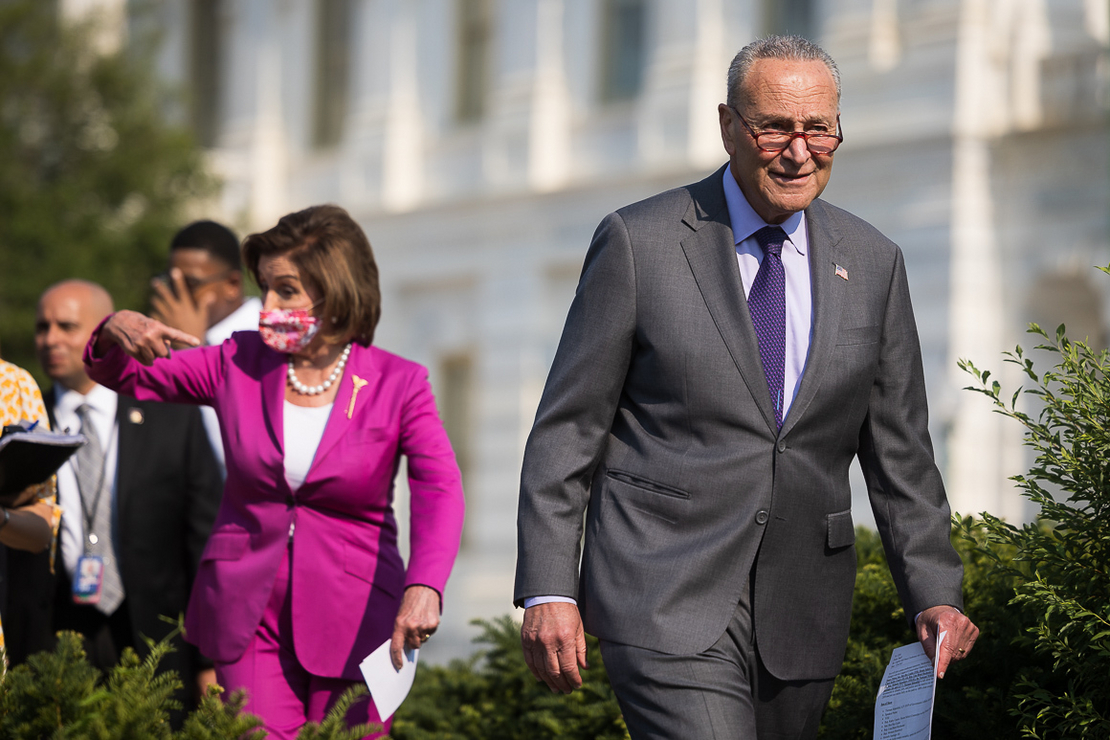 Democrats will try to advance a two-track infrastructure legislative strategy this week, while looking to overcome an open rift between centrists and leadership, and unresolved questions about competing priorities on both sides of the Capitol.

The House will return later today for an unusual but brief interruption of the extended August recess to vote on the $3.5 trillion budget resolution, S. Con Res. 14, that the Senate passed earlier this month.

Both chambers approving the resolution is a key step to unlock the budget reconciliation process that allows certain bills to pass the Senate by a simple majority, denying Republicans the right to filibuster.

But the immediate challenge is overcoming resistance from a band of nine centrist Democrats, who want Speaker Nancy Pelosi (D-Calif.) to first schedule a vote on the $1.2 trillion bipartisan infrastructure package, H.R. 3684, that also passed the Senate earlier this month.

The group, led by Rep. Josh Gottheimer (D-N.J.), dug in on the weeklong standoff Friday, releasing a joint statement reiterating its view that Congress should send the bipartisan bill to President Biden immediately (Greenwire, Aug. 20).

“We’ve got great ability here to fight climate change through this package,” Gottheimer said Friday on MSNBC, addressing a chief concern of liberals over the Senate bill, which includes about $550 billion in new spending for climate resiliency, the power sector and electric vehicles, among other issues.

“Let’s just get it done, move it forward and immediately move to reconciliation just like the Senate,” Gottheimer added.

But House Transportation and Infrastructure Chair Peter DeFazio (D-Ore.) questioned the centrists’ logic last week. “If we were to pass this bill as is, I don’t know that we would even see a reconciliation bill come out of the Senate,” he said during an event sponsored by The Washington Post. “I think that we have to hold them both.”

The nine — already under attack from the left for accepting donations from fossil fuel interests — drew more fire Friday from Evergreen Action, which urged Democrats to “waste no time before advancing the budget resolution” (Greenwire, Aug. 19).

“The American people gave Joe Biden and Congress a clear mandate to act on a bold climate agenda," Raad said. "These nine Democratic members are threatening to stand in the way of Joe Biden’s climate plan, while their own constituents are losing their lives, jobs and homes to climate disasters."

But the U.S. Chamber of Commerce, a top supporter of the Senate bipartisan infrastructure bill, is running ads in support of the nine Democrats in their districts, The Hill reported Friday.

Pelosi, cheered on by liberals in her caucus, isn’t backing down from her decision to hold off on passing the Senate bill until the reconciliation package advances, whenever that can happen.

In a letter to members this weekend, the speaker said, "Any delay to passing the budget resolution threatens the timetable for delivering the historic progress and the transformative vision that Democrats share."

The Rules Committee will meet at 11 a.m. today to set floor debate parameters for the budget resolution. In a bid backed by the White House to mollify the moderate bloc, the combined rule will also set debate terms for the Senate infrastructure bill, as well as new voting rights legislation. Final passage of the budget resolution and the voting rights bill — but not the bipartisan infrastructure package — will likely happen tomorrow.

The longer-term challenge Democrats face is assembling their respective reconciliation bills, which are already under development in both chambers. Biden met virtually late last week with Pelosi and House committee chairs to plot strategy.

“The meeting was marked by a determination to produce results — and soon,” Pelosi said in a Thursday statement.

The House will go first on reconciliation and will “spearhead” the writing of the bill, according to a report released last week by Budget Chair John Yarmuth (D-Ky.). That’s to comply with the Constitution’s origination clause, which mandates that revenue bills start in the House.

While there are procedural moves that are frequently employed to circumvent the requirement, it is expected to be strictly observed to conform to the rules that govern the reconciliation process.

But in the Senate, Majority Leader Chuck Schumer (D-N.Y.) has already tasked his committee chairs with drafting their respective portions of the reconciliation bill, with a Sept. 15 deadline looming for presenting it to the Democratic caucus. Schumer wants to move the bill as quickly as possible after that.

How the two chambers will reconcile their competing reconciliation bills remains an open question. For instance, on clean energy taxes — which will be paramount to meeting Biden’s emissions targets — the tax-writing panels in each chamber are pushing their own plans.

Senate Finance Chair Ron Wyden (D-Ore.) is equally committed to his own clean energy tax overhaul, the “Clean Energy for America Act,” S. 1298, that advanced through his panel earlier this year.

The Senate bill would also cancel long-standing tax breaks enjoyed by fossil fuel interests, a potential flashpoint for moderate Democrats from oil-, gas- and coal-producing states in the 50-50 Senate.

House tax-writers may have the upper hand on their Senate colleagues because of the origination clause, but aides and lobbyists say they don’t expect the "GREEN Act" to be the last word on the subject.

Another looming hiccup is the manner in which reconciliation instructions are meted out to House and Senate committees. In large part because of jurisdictional differences across the Capitol, panels that are tasked with writing the bills have different spending allocations guiding them that are expected to produce varying approaches to the underlying policies.

For example, the Senate Energy and Natural Resources Committee is allocated $198 billion under the budget resolution to write its portion of the reconciliation package, the centerpiece of which will be a clean energy standard.

By contrast, the allocation for the House Energy and Commerce Committee, which will draft the House’s CES plan, is more than twice that amount at $486.5 billion. That reflects the broad jurisdiction of the House panel, which includes health care as well as environmental issues under the purview of the Senate Environment and Public Works Committee.

Those discrepancies are resolvable, aides say, but may well produce starkly different legislative provisions that ultimately will have to pass muster with Democrats who hail from across the political spectrum in both chambers.

Another hurdle is the bipartisan deal itself. While Biden reportedly made assurances to the small band of bipartisan senators that negotiated the package that the administration will not “double-dip” — or look to increase spending on specific areas in the reconciliation bill — DeFazio made clear that he is looking to do exactly that on transit, wastewater and climate policies.

“I didn’t sign that agreement,” he said last week. “In fact, I don’t believe anybody in the majority in the Senate, except for a couple of senators, signed off on that agreement. We are working with the White House to see if there are ways around it. I’m looking at creating new programs that are not the same as the ones that were funded there.”